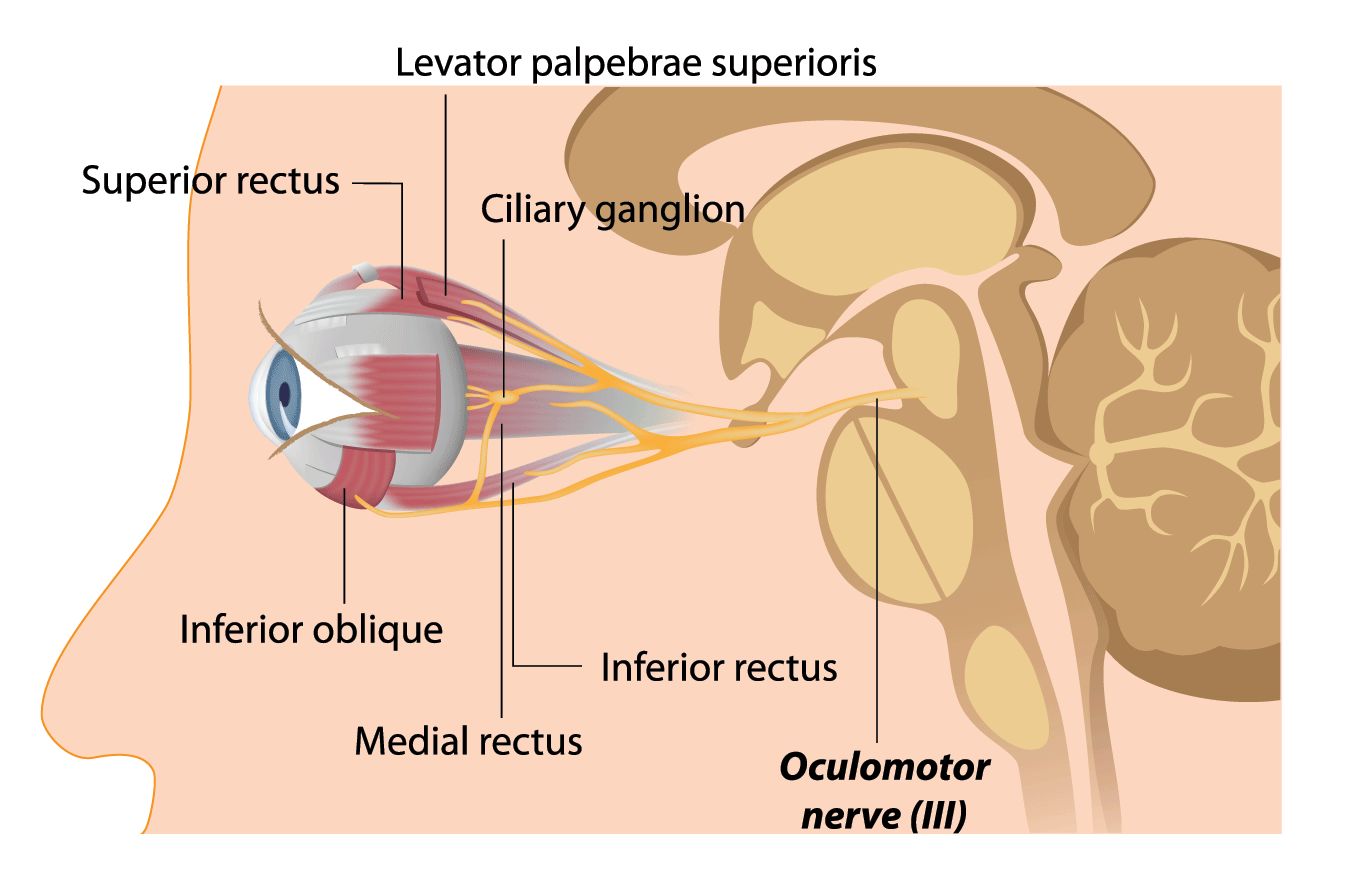 What is the oculomotor nerve?

When viewing the anatomical order of the cranial nerves within the brain, the oculomotor nerve comes third. This is why it’s also referred to as “cranial nerve 3” or the “third cranial nerve.”

Because the oculomotor nerve serves both somatic and visceral motor functions, its fibers stem from two different nuclei in the midbrain. The midbrain is the topmost part of the brainstem and is where many cranial nerves begin.

Though they are separate nuclei, the oculomotor nucleus and Edinger-Westphal nucleus are very close together and have similar routes through the brain to the eyes. And while there are two different nerve fibers that make up the oculomotor nerve, it’s still referred to as a single nerve.

As they exit the cavernous sinus, both branches enter the orbit (eye socket) via the superior orbital fissure, which is a large hole behind each eye. Before reaching their destination, the two branches divide further to innervate (provide function to) the different muscles in and around the eye.

The superior branch splits to innervate the:

The inferior branch divides to innervate the:

The third cranial nerve gives function to four of the six eye muscles that control eyeball movement. The muscles that provide somatic motor function include the:

When it comes to visceral motor function, the oculomotor nerve innervates the sphincter pupillae muscle near the pupil. It also allows the function of the ciliary muscles. These muscles are inside the eyeball and control the curvature of the eye’s lens. They also make it possible for the pupils to constrict.

While this may seem like a small task, lens curvature and pupil constriction are critical to vision and make the following actions possible:

Problems that can affect cranial nerve 3

Cranial nerve 3 can be affected by oculomotor nerve dysfunction. This is caused by a group of disorders that result in paralysis of cranial nerve 3. When this occurs, it’s known as third nerve palsy.

Third nerve palsy describes partial or complete paralysis of the oculomotor nerve. There are varying degrees of palsy, and different functions may be affected from person to person.

Oculomotor nerve palsy can be congenital, meaning you’re born with it, or acquired, which means it occurred later in life.

It’s possible for third nerve palsy to be idiopathic. This means doctors are unsure of the cause.

Acquired third nerve palsy may be caused by the following:

As mentioned, symptoms and their severity differ from case to case. However, some signs of third nerve palsy include:

Signs of third nerve palsy usually only affect one side of the face, though it’s possible for both sides to be affected. If it’s a partial palsy, it’s possible that only a few of these symptoms are present. For example, you may experience eye misalignment, but you’re still able to lift your eyelid properly.

If third cranial nerve weakness or paralysis is due to congenital-related causes, there is no treatment to regain function. On the other hand, acquired cases may resolve on their own, depending on what caused it.

Surgery will be required if the cause is related to a brain tumor, aneurysm or high intracranial pressure.

Otherwise, a doctor will usually wait a few months to see if the palsy improves before recommending eye surgery. In the meantime, they may suggest wearing an eye patch or prism glasses to help with the double vision.

If there is no improvement after a few months, your doctor may recommend strabismus surgery. The procedure will help realign the eyes and can improve the appearance of the eyes and the double vision experienced.

Ptosis surgery is also available to help lift the droopy eyelid, which can help improve visibility in the affected eye.

See an eye doctor if you notice sudden changes in your vision, especially if the changes occur after a head or face injury. Changes in the eyes’ appearance, including their alignment and ability to work together, should also be looked at by a doctor.

What is the difference between somatic and visceral reflex? Pediaa. December 2018.

Summary of the cranial nerves. Teach Me Anatomy. September 2022.