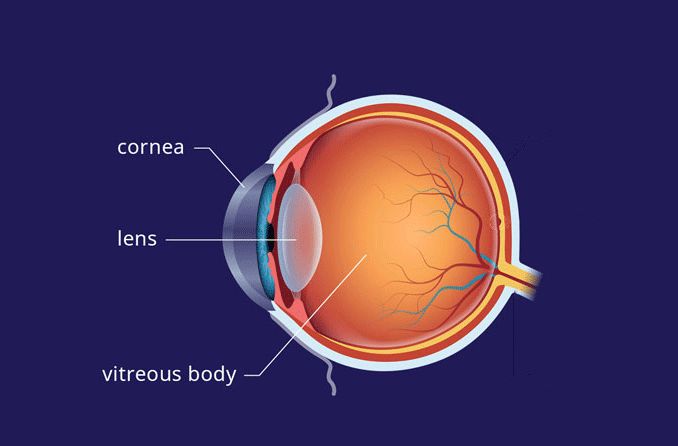 What is the lens of the eye?

The lens of the eye, also called the crystalline lens, is an important part of the eye’s anatomy that allows the eye to focus on objects at varying distances. It is located behind the iris and in front of the vitreous body.

In its natural state, the lens looks like an elongated sphere — a shape known as ellipsoid — that resembles a deflated ball. The average lens size in adults is approximately 10 mm across and 4 mm from front to back.

The lens is made up almost entirely of proteins. In fact, proteins make up nearly 60% of the eye’s lens — a higher protein concentration than any other bodily tissue. The tissue is transparent, which allows light to easily enter the eye. It’s also flexible, so it can change shape and bend the light to focus properly on the retina.

Function of the lens of the eye

The primary function of the lens is to bend and focus light to create a sharp image. To do that, the lens uses the help of ciliary muscles to stretch and thin out when focusing on distant objects, or to shrink and thicken when focusing on near objects.

When light enters the eye, the lens will bend and focus incoming light directly on the retina, which is how the clearest possible image is produced.

The crystalline lens projects a focused image on the retina. However, the initial image projected is inverted (either upside down or reversed). When the image is sent to the brain via the optic nerve, the brain will flip the image back to normal. [Read our article on how the visual process works.]

The lens relies on the aqueous humor for energy and cleansing rather than nerves or blood flow. Aqueous humor is the clear fluid located between the cornea and the lens that flows through the eye and then drains from the eye through the trabecular meshwork.

Accommodation refers to the lenses' ability to bounce between focusing on near objects and far objects with little interference.

For example, if you’re approaching a traffic light while driving, the lenses in your eyes will be focused distantly, because the light is relatively far away. As you get closer to the light, your lenses will make tiny changes in shape to accommodate the approaching object that used to be distant.

Presbyopia is a natural, age-related vision change that affects a person’s ability to focus on close-up objects. The condition affects almost everyone, even if they’ve never had vision problems before.

The cause of presbyopia is related to alterations within the lenses’ composition. Aging triggers a change in the protein of the lenses, which causes them to thicken and become inflexible. The ciliary muscle fibers that keep the lens in place and help it change shape are also affected.

All of these developments make it difficult for the eyes to focus on nearby objects.

Signs of presbyopia typically begin around the age of 40 and gradually progress until age 65 or 70, when presbyopia plateaus. Presbyopia is not harmful and can be corrected with glasses, contacts or vision surgery.

Clouding of the lens (cataract)

Cataracts occur when the lens of the eye becomes cloudy or hazy, resulting in blurred vision. Advanced age is the leading cause of cataract development, though it’s possible for children to be born with congenital cataracts.

As the eye ages, the proteins that make up the lens begin to clump together. This may occur in one or both eyes and likely will not affect vision in the beginning. Over time, eyesight can appear blurry, dull, hazy or dim, which can greatly affect one’s ability to see in low-light conditions (at night). If untreated, cataracts can lead to vision loss.

Cataract surgery can be performed to remove the clouded lens and replace it with an artificial one, known as an intraocular lens (IOL). There are many types of IOLs available for the surgery, including monofocal, multifocal and toric.

The lens is a vital part of the eye and makes clear vision possible. Because it’s an internal structure, it can be difficult to know if something is amiss with the lens.

Having an eye doctor conduct a comprehensive eye exam gives them the opportunity to look inside the eye and make sure everything in it — including the lens — is healthy.

If you notice any sudden changes in your vision, or if it’s been longer than two years since your last eye exam, it’s time to schedule one. It’s a small but important step in keeping your vision clear and your eyes healthy.

RELATED READING: Refractive lens exchange (replacing the natural lenses to correct a refractive error rather than to treat cataracts)

Vitreous humor: Gel of the eye