Blue light: It's both bad and good for you

Stepping outdoors into sunlight; flipping on a wall switch indoors; turning on your computer, phone or other digital device — all of these things result in your eyes being exposed to a variety of visible (and sometimes invisible) light rays that can have a range of effects.

Most people are aware that sunlight contains visible light rays and also invisible ultraviolet rays that can tan or burn the skin. But what many don't know is that the visible light emitted by the sun comprises a range of different-colored light rays that contain different amounts of energy.

Sunlight contains red, orange, yellow, green and blue light rays and many shades of each of these colors, depending on the energy and wavelength of the individual rays (also called electromagnetic radiation). Combined, this spectrum of colored light rays creates what we call "white light" or sunlight. 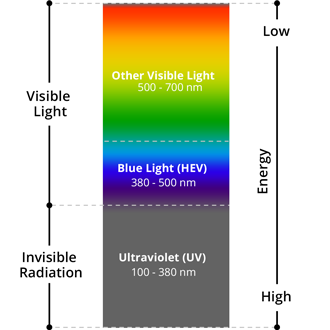 The electromagnetic rays just beyond the red end of the visible light spectrum are called infrared — they are warming, but invisible. (The "warming lamps" you see keeping food warm at your local eatery emit infrared radiation. But these lamps also emit visible red light so people know they are on! The same is true for other types of heat lamps.)

UV rays have higher energy than visible light rays, which makes them capable of producing changes in the skin that create a suntan. In fact, the bulbs in tanning booths emit a controlled amount of UV radiation specifically for this reason.

But too much exposure to UV causes a painful sunburn — and even worse, can lead to skin cancer. These rays also can cause sunburned eyes — a condition called photokeratitis or snow blindness.

But ultraviolet radiation, in moderation, also has beneficial effects, such as helping the body manufacture adequate amounts of vitamin D.

Generally, scientists say the visible light spectrum comprises electromagnetic radiation with wavelengths ranging from 380 nanometers (nm) on the blue end of the spectrum to about 700 nm on the red end. (By the way, a nanometer is one billionth of a meter — that's 0.000000001 meter!)

So approximately one-third of all visible light is considered high-energy visible (HEV) or "blue" light.

Sunlight is the main source of blue light, and being outdoors during daylight is where most of us get most of our exposure to it. But there are also many man-made, indoor sources of blue light, including fluorescent and LED lighting and flat-screen televisions.

Most notably, the display screens of computers, electronic notebooks, smartphones and other digital devices emit significant amounts of blue light.

The amount of HEV light these devices emit is only a fraction of that emitted by the sun. But the amount of time people spend using these devices and the proximity of these screens to the user's face have many eye doctors and other health care professionals concerned about possible long-term effects of blue light on eye health.

3. The eye is not very good at blocking blue light.

Anterior structures of the adult human eye (the cornea and

lens
) are very effective at blocking UV rays from reaching the light-sensitive retina at the back of the eyeball. In fact, less than one percent of UV radiation from the sun reaches the retina, even if you aren't wearing sunglasses.

(Keep in mind, though, that sunglasses that block 100 percent of UV are essential to protect these and other parts of the eye from damage that could lead to cataracts, snow blindness, a pinguecula and/or pterygium, and even cancer.) 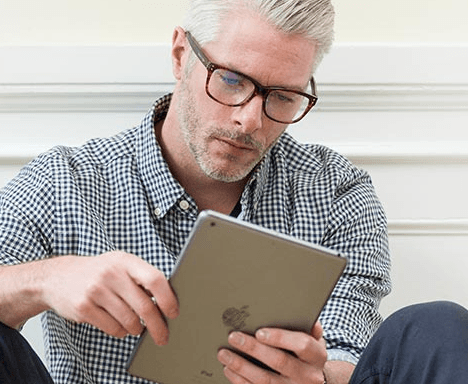 Nearly 70% of American adults experience some form of digital eye strain due to prolonged use of electronic devices. To combat these effects, Clearly offers a line of Digital protection lenses, which offer a shield that reduces glare and filters the blue light from digital screens and artificial light.

We live in a digital world and extended screen time is quickly becoming the norm in our everyday lives. Prolonged usage of digital devices, including computers, tablets, and smartphones, increases your exposure to Harmful Blue Light, which can lead to eye strain, blurred vision, headaches, and trouble sleeping. Reduce your exposure with regular breaks and digital protection glasses.

Get some new lenses and keep your eyes at ease.

4. Blue light exposure may increase the risk of macular degeneration.

The fact that blue light penetrates all the way to the retina (the inner lining of the back of the eye) is important, because laboratory studies have shown that too much exposure to blue light can damage light-sensitive cells in the retina.

This causes changes that resemble those of macular degeneration, which can lead to permanent vision loss.

Although more research is needed to determine how much natural and man-made blue light is "too much blue light" for the retina, many eye care providers are concerned that the added blue light exposure from computer screens, smartphones and other digital devices might increase a person's risk of macular degeneration later in life.

Because short-wavelength, high energy blue light scatters more easily than other visible light, it is not as easily focused. When you're looking at computer screens and other digital devices that emit significant amounts of blue light, this unfocused visual "noise" reduces contrast and can contribute to digital eye strain.

6. Blue light protection may be even more important after cataract surgery.

The lens in the adult human eye blocks nearly 100 percent of the sun's UV rays. As part of the normal aging process, the eye's natural lens eventually blocks some short-wavelength blue light as well — the type of blue light most likely to cause damage to the retina and lead to macular degeneration and vision loss.

If you have cataracts and are about to have cataract surgery, ask your surgeon what type of intraocular lens (IOL) will be used to replace your cloudy natural lens, and how much blue light protection the IOL provides.

After cataract surgery you might benefit from eyeglasses that have lenses with a special blue light filter — especially if you spend long hours in front of a computer screen or using other digital devices.

In fact, something called light therapy is used to treat seasonal affective disorder (SAD) — a type of depression that's related to changes in seasons, with symptoms usually beginning in the fall and continuing through winter.

The light sources for this therapy emit bright white light that contains a significant amount of HEV blue light rays.

But too much blue light late at night (reading a novel on a tablet computer or e-reader at bedtime, for example) can disrupt this cycle, potentially causing sleepless nights and daytime fatigue.

If you are using your phone constantly — especially if you use it primarily for texting, e-mailing and web browsing — a convenient way to reduce your blue light exposure is to use a blue light filter. 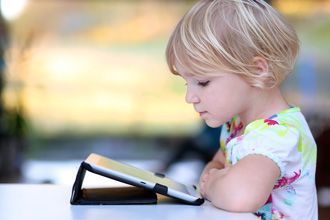 These filters are available for smartphones, tablets, and computer screens and prevent significant amounts of blue light emitted from these devices from reaching your eyes without affecting the visibility of the display. Some are made with thin tempered glass that also protects your device's screen from scratches.

As mentioned above, computer glasses  also can be helpful to reduce blue light exposure from computers and other digital devices. These special-purpose glasses are available without an eyeglass prescription if you have no need for vision correction or if you routinely wear contact lenses to correct your eyesight.

Or computer glasses can be specially prescribed to optimize your vision specifically for the distance from which you view your devices.

If you have presbyopia and routinely wear progressive lenses or bifocals, prescription computer glasses with

single vision
lenses give you the additional benefit of a much larger field of view for seeing your entire computer screen clearly. (Keep in mind, though, that this type of computer eyewear is exclusively for seeing objects within arm's length and cannot be worn for driving or other distance vision needs.)

You also may want to consider photochromic lenses, which provide seamless protection from UV and blue light both indoors and out and also automatically darken in response to UV rays outdoors to increase comfort and reduce glare.

Ask your eye doctor or optician which type of vision correction and lens features best suit your needs for viewing your computer and other digital devices and protecting your eyes from blue light.

Worried about blue light? Find an optical shop near you or online and shop for blue-light blocking glasses and sunglasses.

The lowdown on blue light: good vs. bad, and its connection to AMD. Review of Optometry. February 2014.

The role of UV damage in ocular disease. Review of Optometry. October 2012.

Contrast is enhanced by yellow lenses because of selective reduction of short-wavelength light. Optometry and Vision Science. February 2000.

7 times when you must see an eye doctor ASAP

Which eyeglass lenses are best for me and my vision?