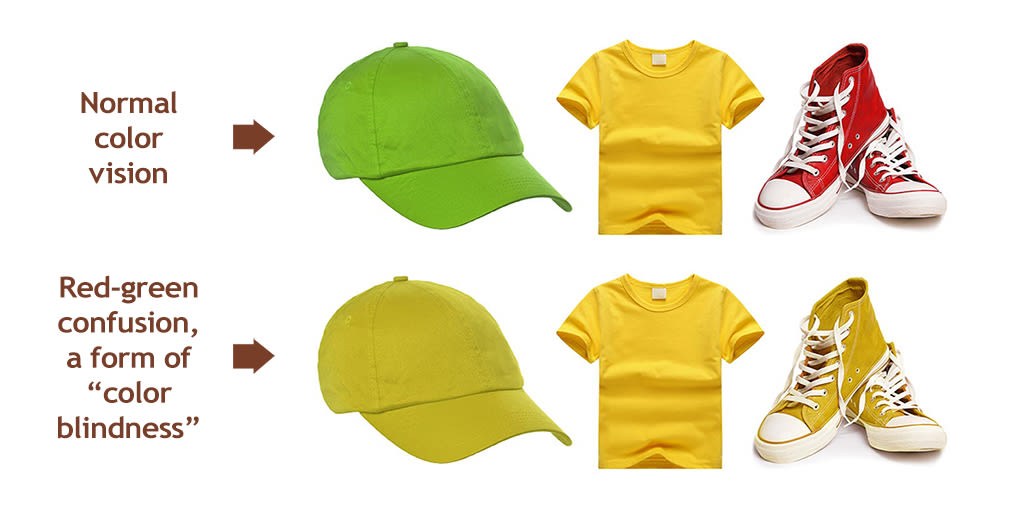 Color blindness is not a form of blindness at all, but a deficiency in the way you see color.

If you are colorblind, you have difficulty distinguishing certain colors, such as blue and yellow or red and green.

Color blindness (or, more accurately, color vision deficiency) is an inherited condition that affects males more frequently than females. According to Prevent Blindness, an estimated 8 percent of males and less than 1 percent of females have color vision problems.

Red-green color deficiency is the most common form of color blindness.

Much more rarely, a person may inherit a trait that reduces the ability to see blue and yellow hues. This blue-yellow color deficiency usually affects men and women equally.

Do you have difficulty telling if colors are blue and yellow, or red and green? Do other people sometimes inform you that the color you think you are seeing is wrong?

If so, these are primary signs that you have a color vision deficiency.

Contrary to popular belief, it is rare for a color blind person to see only in shades of gray.

Most people who are considered "color blind" can see colors, but certain colors appear washed out and are easily confused with other colors, depending on the type of color vision deficiency they have.

[View more simulations of what a person with color deficiency might see.]

If you develop color vision problems when normally you have been able to see a full range of color, then you definitely should visit your doctor. Sudden or gradual loss of color vision can indicate any number of underlying health problems, such as cataracts.

Color blindness testing can help determine the kind of color deficiency you have.

Color blindness occurs when light-sensitive cells in the retina fail to respond appropriately to variations in wavelengths of light that enable people to see an array of colors.

Photoreceptors in the retina are called rods and cones. Rods are more plentiful (there are approximately 100 million rods in the human retina) and they are more sensitive to light, but rods are incapable of perceiving color.

The 6 to 7 million cones in the human retina are responsible for color vision, and these photoreceptors are concentrated in the central zone of the retina called the macula.

The center of the macula is called the fovea, and this tiny (0.3 mm diameter) area contains the highest concentration of cones in the retina and is responsible for our most acute color vision.

Inherited forms of color blindness often are related to deficiencies in certain types of cones or outright absence of these cones.

Besides differences in genetic makeup, other causes of color vision defects or loss include:

Color blindness also can occur when aging processes damage retinal cells. An injury or damage to areas of the brain where vision processing takes place also can cause color vision deficiencies.

Gene therapy has cured color blindness in monkeys, according to researchers at the University of Washington.

While these findings in animals look promising, gene therapy would not be considered for humans until treatments are proven to be safe.

Meanwhile, there is no cure for color blindness. But some coping strategies may help you function better in a color-oriented world.

Most people are able to adapt to color vision deficiencies without too much trouble. But some professions, such as graphic design and occupations that require handling various colors of electrical wiring, depend on accurate color perception.

If you become aware early in life that you are colorblind, you may want to choose a career that does not require accurate color perception.

If your child has a color deficiency, be sure to speak with his or her teachers about it, so they can plan their lessons and presentations accordingly.

Lenses for the Color Blind

Some people use special lenses to enhance color perception, which are filters available in either contact lens or eyeglass lens form.

One example are color blind glasses developed by Enchroma. The tinted lenses in Enchroma's color blind glasses include patented light-filtering technology to give people with common forms of color blindness the ability to see the broad spectrum of bright colors most of us take for granted, according to the company.

If you have a color vision deficiency, see an eye doctor near you to discuss if color blind glasses are a good choice for you.

You also can learn ways to work around your inability to pick out certain colors. For example, you might organize and label your clothing to avoid color clashes. (Ask friends or family members who have normal color vision to help with this project.)

Also, learn to recognize certain colored items by their order rather than their color. For example, recognize that the red light is at the top of the traffic signal, and green is at the bottom.

Also, a variety of downloadable apps to assist with color detection have been developed for Android and Apple devices.

See an eye doctor for additional help and guidance if you have difficulty distinguishing colors or if you suspect your child may be colorblind.

Red-green color blindness is the most common inherited form of color vision deficiency. It is caused by a fairly common X-linked recessive gene. 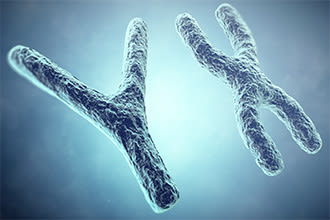 If you have red-green color blindness caused by an X-linked recessive gene, your mother will be a carrier of the gene or be color deficient herself.

Fathers with this inherited form of red-green color blindness pass the X-linked gene to their daughters but not to their sons, because a son cannot receive X-linked genetic material from his father.

When a mother passes along this X-linked trait to her son, he will inherit the color vision deficiency and have trouble distinguishing reds and greens.

Again, a daughter can be a carrier but will have this form of color blindness herself only when both her father and mother pass along the X-linked gene. This is why more men than women are color blind.