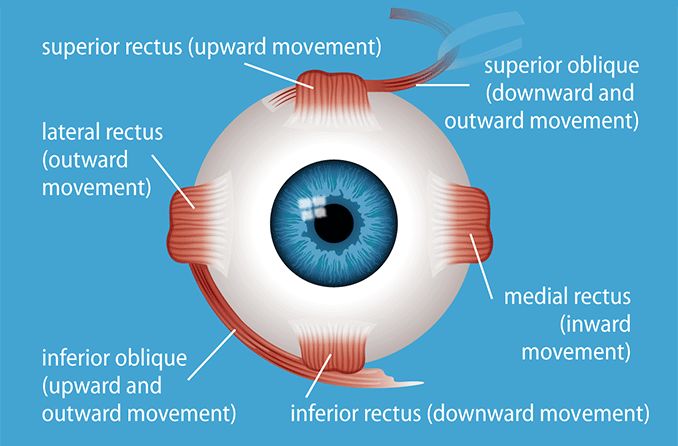 Extrinsic eye muscles (also called extraocular muscles) are attached to the outside of the eyeball and enable the eyes to move in all directions of sight.

There are six extraocular eye muscles and one muscle that controls movement in the upper eyelid. Though the extraocular muscles are found within the orbit of the eye, they are not located in the eyeball itself.

The main function of the extraocular eye muscles is to control eye movement and eye alignment. They are different from the intrinsic eye muscles, which enable the eye to focus on near objects and control how much light enters the eye.

Extraocular eye muscles and their functions

Among the extraocular muscles, there are four straight (rectus) muscles and two oblique muscles that work together to move the eye from side to side, up and down, and control its rotation.

Additionally, a muscle called the levator palpebrae superioris (LPS) raises the upper eyelid and keeps it in position.

All seven of these eye movement muscles are controlled by three cranial nerves: the oculomotor nerve, trochlear nerve and abducens nerve.

The eye has four recti muscles, all of which attach to the front half of the eye (anterior to the equator of the eye). These muscles are:

Each of the eye’s recti muscles originates from the common tendinous ring (sometimes referred to as the annular tendon or annulus of Zinn), This is a fibrous ring of connective tissue that surrounds the optic nerve where it connects to the orbit.

“Rectus” is the Latin word for “straight,” which indicates that the recti muscles attach directly from the orbit to the sclera of the eye.

The medial rectus eye muscle attaches to the side of the eye closest to the nose and moves the eye inward. Movement of the medial rectus muscle is controlled by the oculomotor nerve.

The inferior rectus eye muscle is located at the bottom part of the eye and allows the eye to move downward. This muscle’s movement is controlled by the oculomotor nerve.

There are two oblique muscles of the eye. These muscles are:

The superior oblique eye muscle originates from the sphenoid bone, which is one of the seven bones that make up the eye socket. It is controlled by the fourth cranial nerve (trochlear nerve).

A small pulley structure in the eye called the trochlea connects the superior oblique muscle from the sphenoid bone to the top of the eye, near the nose.

When the eye is in the primary position (usually facing straight ahead), the main function of the superior oblique muscle is intorsion. (In other words, it rotates the 12 o’clock point of the vertical meridian of the cornea inward toward the nose.) It also moves the line of sight of the eye downward and outward.

The inferior oblique eye muscle originates from the front of the orbital floor, close to the nose.

Its main function is to extort the eye when looking straight ahead (rotate the 12 o’clock position of the vertical meridian of the cornea toward the ear). It also elevates and abducts the eye (moves the direction of gaze upward and outward).

Action of the inferior oblique muscle is controlled by the third cranial nerve (oculomotor nerve).

In addition to the six main extraocular muscles, the eye has another extrinsic muscle called the levator palpebrae superioris. This muscle is the single muscle responsible for elevating the upper eyelid and keeping it in position.

This muscle originates from the sphenoid bone in the eye’s orbital structure. Its movement is controlled by the oculomotor nerve.

While extrinsic (extraocular) muscles control the movement of the eyes, the function of intrinsic eye muscles is to focus the eye, and control the iris to allow a specific amount of light to enter it.

If one of the extraocular muscles is too strong, too weak, or otherwise dysfunctional, an eye movement disorder can develop. Eye movement disorders can be mild or severe. If a case is severe enough, eye muscle surgery may be recommended.

Disorders that occur due to dysfunction of the extraocular muscles include:

Be sure to get regular eye exams to help maintain healthy vision, from visual acuity (how well you see) to ensuring the functions of your vision system (such as eye movement) are performing properly.

READ NEXT: What is ophthalmoplegia?