To put a hard stop on screen time, some moms and dads set time limits on their children's daily device use. For example, when a total of two hours of screen time has been reached, no more texting, game playing or YouTube watching. 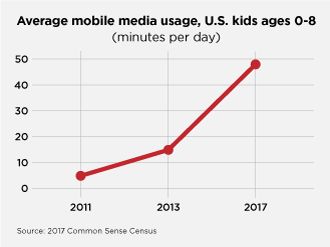 According to The Vision Council, 72 percent of American parents report their children routinely engage in more than two hours of screen time per day. And it's very likely most kids actually spend significantly more time staring at screens than their parents think they do.

The Vision Council says 30 percent of parents report their children experience at least one of the following symptoms after being exposed to more than two hours of screen time per day:

Blue light has shorter wavelengths and higher energy than other visible light rays. And laboratory research suggests certain bands of blue light may be harmful to the light-sensitive retina of the eye over time.

SEE RELATED: What are blue light glasses? Do you need them?

And while it's true that staring at the screens of digital devices adds to the amount of blue light exposure kids get over the course of their lifetime, it's important to point out that the sun emits far more harmful blue light than computers, e-tablets and smartphones.

Research has shown that people who experience disrupted 24-hour cycles of sleep and activity also are more likely to have mood disorders, lower levels of happiness and greater feelings of loneliness.

Also, an intriguing two-year study of more than 2,500 normal Los Angeles high school students found that teens who reported greater digital device use and screen time during the study were about 10 percent more likely to develop ADHD symptoms by the end of the study period.

The researchers pointed out, however, that this doesn't prove a direct cause-and-effect relationship and more research is needed to fully understand the association between screen time and ADHD symptoms. 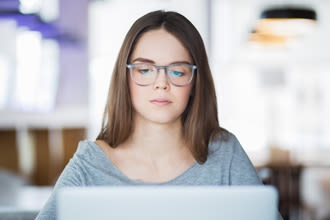 The simple truth is that the long-term risks of incremental blue light exposure from frequent use of digital devices is not yet known. This is because no previous generation has been exposed to comparable levels blue light from digital devices from childhood on.

For example, researchers in Japan and Switzerland investigated what happened to the retinas of aging eyes from blue light exposure after cataract surgery.

In the study, 79 eyes received a clear intraocular lens (IOL) that did not block blue light, and 52 eyes received a yellow IOL that blocked blue light. (Prior to cataract surgery, the retinas of all eyes were protected from blue light by the eye's natural lens that had become clouded by cataracts.)

The results of this study suggest that the retinas of aging eyes are more susceptible to oxidative damage caused by blue light exposure. If this is true, then it may be prudent and wise to take steps to reduce premature aging of the retina by limiting the amount of blue light exposure the eye receives throughout life.

The greatest benefit may occur when these protective measures are taken during childhood, because this is when the media of the eye (the lens in particular) are exceptionally clear and allow the greatest amount of blue light to reach the retina.

SEE RELATED: Should I buy my kids blue light glasses? 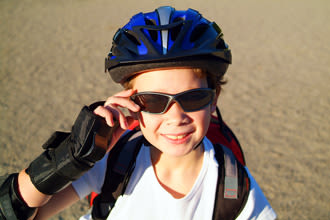 The sun emits much more blue light than digital devices. All children should wear sunglasses outdoors to reduce their exposure to harmful blue light.

One solution is to purchase eyeglasses with lenses that reduce the amount of blue light that enters the eyes from computer, e-tablet and smartphone screens. A number of lens manufacturers produce eyeglass lenses that filter blue light.

But what if your child doesn't need prescription glasses?

The most convenient option in this case is to purchase a protective blue light filter that can be applied to the surface of your child's digital devices.

Also, remember to use the blue light filtering features on certain devices (like Apple's Night Shift), or multi-platform apps that block blue light, such as f.lux and Iris.

Or set a time limit on your child's phone use. Apple, Google and other tech companies have recently introduced time management features and apps that allow you to monitor your child's daily screen time. Visit your phone vendor's website or store to learn more.

Be proactive as a parent. One goal maybe? Spend more quality time together and less screen time with your son or daughter left to their own devices.

Better yet? Protect your child's vision with blue-light filtering screens while they're watching YouTube videos, posting Snaps and playing games.

READ NEXT: Tips to reduce your child's risk of computer vision problems

How to use Apple's new screen time and app limits features in iOS 12. The Verge. September 2018.

Association of digital media use with subsequent symptoms of attention-deficit/hyperactivity disorder among adolescents. JAMA. July 2018.

Association of disrupted circadian rhythmicity with mood disorders, subjective well-being, and cognitive function: a cross-sectional study of 91,105 participants from the UK Biobank. The Lancet Psychiatry. June 2018.

Features to consider when purchasing sports glasses for kids

Toys and eye safety: Parents and kids, be careful

What is (and isn't) vision therapy for children?

How you can improve your kid’s vision