What is a pediatric optometrist? 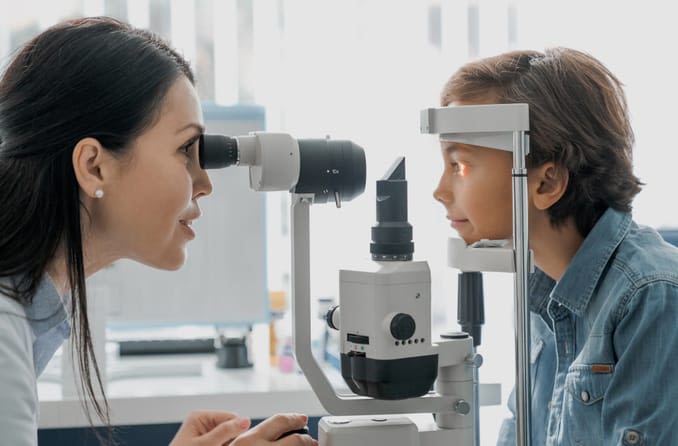 A pediatric optometrist is an eye doctor (a Doctor of Optometry, abbreviated “OD”) who specializes in children’s eye health. They have additional training, education and experience working with children, performing kid-friendly eye exams and testing, and recognizing and treating child-specific eye conditions.

A child may be referred to a pediatric optometrist when a pediatrician or general optometrist feels specialized optometric care is needed — often because there may be an eye teaming problem or other issue that cannot be corrected with eyeglasses or contact lenses alone.

To become a pediatric optometrist, one must first complete a four-year degree from a college or university plus four years of coursework and clinical study to become a Doctor of Optometry (OD). An additional year of residency in pediatric optometry is also typically required.

It’s important to note that while optometrists are doctors of optometry, they are not medical doctors and they do not perform surgery. This is one of the fundamental differences between an optometrist and an ophthalmologist.

SEE RELATED: What is a pediatric ophthalmologist?

Pediatric optometrists are usually the first stop for children who exhibit problems with vision development. The conditions most commonly treated in pediatric optometry are:

Pediatric optometrists can also detect more serious conditions that cannot be treated in their office. If your child’s eye doctor believes they require a specialist, such as a neuro-ophthalmologist or a retina specialist, they will refer you to one for your child’s specific case.

SEE RELATED: Does an eye exam cost more from a pediatric eye doctor?

It’s likely that your child’s optometrist will want to dilate your child’s eyes before the exam so they can take a look inside their eyes and make sure they’re healthy. The doctor will then run a series of tests to examine your child’s visual acuity, pupil function and eye movement.

The doctor also evaluates a child’s depth perception — their ability to see objects three-dimensionally and judge how near or far an object is — during the exam.

The pupils’ reactions to light are typically the same regardless of age, making the test to measure pupil function the same for babies, older children and adults.

Pediatric optometrists will use a flashlight and shine it into each of your child’s eyes. They do this to make sure each of the pupils responds to the new light by constricting.

The inability of one or both pupils to respond to light could indicate a neurological issue and will likely prompt your eye doctor to refer your child to a specialist.

An eye doctor may ask an older child to watch their flashlight (or finger) as the doctor moves it up and down, left and right. The doctor will closely watch the child’s eyes to see how easily they’re able to track a moving object. Additionally, they evaluate how well the eyes work together to focus on an object.

For babies and young children, pediatric optometrists will use lights and toys to play with the child. During this time, the eye doctor will observe the child’s tracking ability and eye alignment.

Eye doctors also evaluate peripheral vision during this time, most commonly measured using the confrontation visual field test with older children. During this test, the eye doctor will start to extend their arm around the side of the child’s head and the child must notify the doctor when they detect the doctor’s hand in their peripheral vision.

When to visit a pediatric optometrist

Start by scheduling a comprehensive eye exam for your child with an optometrist. If they (or your pediatrician) think your child should be evaluated by a pediatric optometrist for more specialized care, they will refer you to one.

Depending on your insurance, you may need a referral from a general optometrist, pediatrician or family physician before your insurance provider will cover your appointment.

READ NEXT: What questions should I ask my child’s eye doctor?

What is an optician, and when should you see one?

Optometrist vs. ophthalmologist: How to choose an eye doctor

What is an optometrist?

Does an eye exam cost more from a pediatric eye doctor?