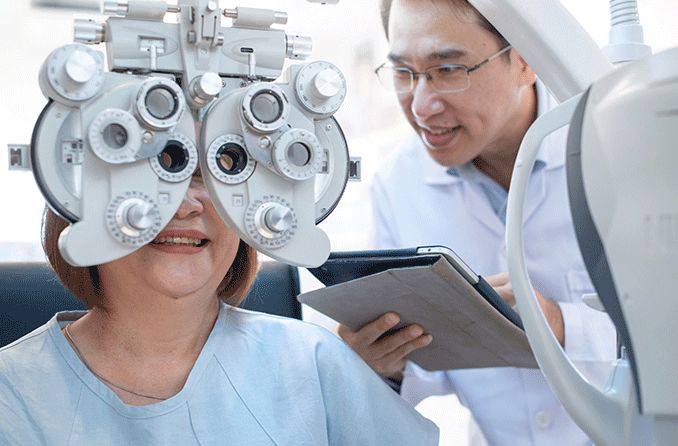 Optometry is a medical field that involves caring for eyesight and eye health.

Optometry tends to cover more-common eye problems with more-straightforward diagnoses and treatments. Serious or complex conditions, in addition to eye-related surgeries, are usually handled within ophthalmology.

An optometrist is like a primary care physician for the eyes. Their goal is to help patients see clearly and care for minor problems that come up along the way. Like a primary doctor, they will refer a patient to a specialist if a problem is outside their range of care.

In America, there are two leading organizations in the field of optometry: the American Optometric Association (AOA) and the American Academy of Optometry (AAO).

About 44,000 optometrists are currently practicing in the United States, according to the AOA.

In addition to others, a doctor of optometry can help detect, manage or treat the following common eye problems:

Optometrists aren’t limited to diagnosing the conditions they can treat. They are well-trained in spotting the warning signs of more serious disorders too, even if those problems require the help of another doctor.

In some cases, an optometrist can help a patient manage a more complex, long-term condition that was first diagnosed by an ophthalmologist. Glaucoma, macular degeneration and amblyopia (lazy eye) are examples of conditions that can be managed by a doctor of optometry to a certain extent.

SEE RELATED: When to see an eye doctor ASAP

Optometry may focus on ophthalmic conditions, but it can also be used to detect other, systemic diseases as well. During the course of an eye exam, an optometrist may be able to see signs of:

If an optometrist finds something that should be examined by an ophthalmologist or non-optical doctor, they will refer the patient to the right medical professional.

Optometry includes several tests and services that are important to maintaining visual and eye health. Vision correction is a widespread need; about two-thirds of Americans over age 18 wear some form of corrective eyewear, according to the National Institutes of Health (NIH).

A doctor of optometry usually provides these services in-office:

While most optometrists don’t perform surgeries, they may be able to perform certain minor procedures in the office. Draining a stye is one common example.

Some optometry practices offer pre- and post-operative care for certain eye-related surgeries, like cataract removal or laser eye surgery. This is known as co-management, because the optometrist is co-managing the patient with the ophthalmologist who performed the procedure.

SEE RELATED: What is an optician?

The comprehensive eye exam — sometimes just called an “eye exam” — is a very important part of optometry. An optometrist usually performs many of these tests every day.

Many people associate optometry with treating blurry vision, but monitoring eye health can be equally important. Both eye health and vision quality are checked during a comprehensive eye exam.

Several painless tests and screenings make up the average exam. They can include:

These tests work hand in hand to give an eye doctor a complete picture of how well a patient can see and how healthy their eyes are. Afterward, they will help the patient determine which, if any, treatments are necessary.

SEE RELATED: What to expect during a comprehensive eye exam

Students who study optometry spend about eight years in school before they earn their title as a doctor of optometry.

While doctors of optometry are very capable of diagnosing and treating many eye conditions, they are not medical doctors. For this reason, they require less training.

A medical eye doctor is called an ophthalmologist. If an optometrist suspects a more complex eye problem that requires in-depth treatment or surgery, they will refer the patient to one of these doctors.

To practice optometry, most people will need to do the following:

These schedules can vary depending on where someone receives their training. Some optometry schools only require three years of undergraduate studies, while others offer a short residency after graduation.

Most four-year optometry programs consist of two years in a classroom setting, followed by two years of clinical rotations and additional training.

Once someone graduates from an optometry school and passes the required board exams, they earn the title of doctor and can legally practice optometry in the United States.

Some doctors go on to specialize in specific areas of care. A pediatric optometrist, for example, specializes in the treatment and management of children’s eye conditions.

Doctors of optometry can practice in many different settings:

Optometrists are required to hold an active license to practice optometry in any of the 50 U.S. states. Licenses are issued and renewed by each state’s optometry board.

When to see an optometrist

Although doctors of optometry may not be able to treat a more serious condition, they are highly skilled professionals that know how to recognize the signs of a severe problem.

If you experience blurry vision, eye pain, or another eye-related concern, schedule a comprehensive eye exam with an eye doctor.

What is an optician, and when should you see one?

Does an eye exam cost more from a pediatric eye doctor?

What is a pediatric optometrist?

Optometrist vs. ophthalmologist: How to choose an eye doctor

What is an optometrist?