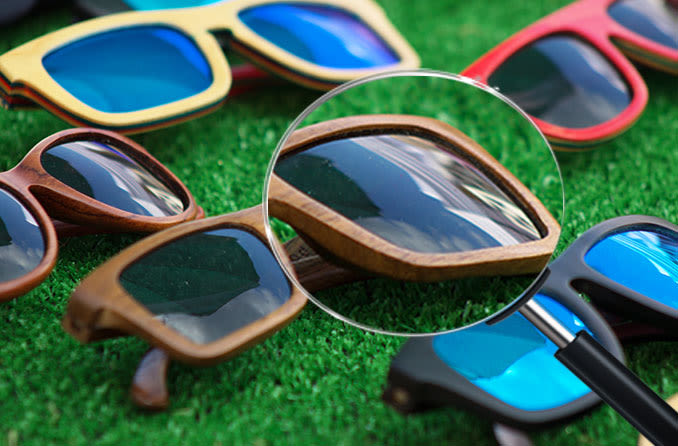 Nobody wants to waste their time or money on fake Ray-Ban Wayfarer sunglasses. The trouble is, fakes are everywhere. If you want the real thing, you must know how to flag the forgeries.

When you buy authentic Ray-Ban Wayfarers, you’re getting frames and lenses manufactured in Italy to exacting standards of design, precision, quality and finish. Sure, they’re more expensive than their imitators, but that’s true for most famous name-brand products.

Think of it this way: Any motorcycle will get you down the road, but Harley-Davidson owners pay extra for a ride they can’t get from anybody else. The same is true for Ray-Ban Wayfarers. If owning the real thing matters to you, fakes or imitators will not cut it.

Before we walk through the most obvious signs of fakery in Ray-Ban Wayfarers, let’s clear one thing up:  The Wayfarer style has been around since the 1950s, when Bausch & Lomb (Ray-Ban’s founder) invented it.

Many legitimate eyeglass manufacturers and retailers sell Wayfarer-style frames. Thus, you can adopt the cool, understated elegance of the Wayfarer design without buying fakes thrown together by shady counterfeiters.

If you cannot settle for anything less than authentic Ray-Ban Wayfarers, you need to know the most common signs of counterfeiting. This is true whether you’re buying new sunglasses or shopping for vintage/collectibles.

The look and feel: Real Wayfarer frames are durable and smooth to the touch. They feel substantial and look well-designed. The fit and finish have no flaws, and the temple arms open easily. Fakes can feel cheap and flimsy.

The temple arms: The raised Ray-Ban logo should be attached to both temple arms. The left temple arm should include the model number plus the size, while the right arm should say, “WAYFARER®, Hand Made in Italy.” Fakes may omit some of this information. On close inspection, the type should appear well-defined with clean edges. Fakes often have lower printing quality.

The hinges: Ray-Ban Wayfarers have distinctive metal hinges with seven prongs — four on one side, three on the other — and two metal studs on each half of the hinge. Fakes typically have plastic hinges or low-quality metal hinges.

The packaging: Genuine Wayfarers come in a box with the distinctive Ray-Ban logo. Look for high-quality printing in the lettering and colors. Bear in mind that determined fakers may put counterfeit Wayfarers in an authentic box. The attached label should include bar codes listing the model number, sizing and manufacturer (Luxottica). These numbers should match the information inside the temple arms. Discrepancies may be evidence of fakery.

The accessories: Look for a distinctive case with Ray-Ban and Luxottica in gold lettering. The case should include a felt liner. Other accessories include a cleaning cloth and an “Icons” booklet featuring other Ray-Ban glasses. Read the lettering closely: Fakes often have misspelled words or typographic errors.

Sunglasses do more than make you look cool and cut down the sun’s glare. They also protect your eyes from damaging ultraviolet rays. Polarized, anti-reflective lenses can make it safer to drive, play sports and operate machinery. Polycarbonate lenses resist impact and shattering, reducing the likelihood of eye injury in an accident.

When a major global brand like Luxottica, which has owned Ray-Ban since 1999, promises that its glasses have these eye-protection features, they must back it up. Otherwise, they would face potential fines and major lawsuits.

The people making fake Ray-Ban Wayfarers operate beyond the reach of litigation or law enforcement. If you buy fakes, you have no assurance that the lenses have the most important eye-protection features. Eye injuries can cloud your vision for decades — or eliminate it altogether.

Some folks believe fakes are fine because they cost less than authentic Wayfarers. That’s understandable — just make sure you’re clear about the threats to your eyesight. Saving a few bucks on shades could prove extremely expensive in the long run.

The best way to get genuine Ray-Ban Wayfarers

If you’re buying vintage Ray-Ban Wayfarers in places like thrift stores, swap meets or e-commerce sites, make sure to do your homework. We’ve covered the most common signs of fakery, but if you search online for a while, you may spot a few more tips.

When you see prices for Ray-Ban Wayfarers that seem too good to be true, you’re probably looking at fakes. But don’t forget: Determined fraudsters may try to sell you fakes at full price, hoping you won’t notice the difference.

A final thought: If you crave Wayfarers but can’t afford the real thing, look for lower-cost versions from reputable sellers like the ones mentioned above.

This who's who in cool sunglasses is your must-have shopping guide.

Why designer sunglasses are worth the investment

How do I know if Ray-Bans have 100% UV protection?