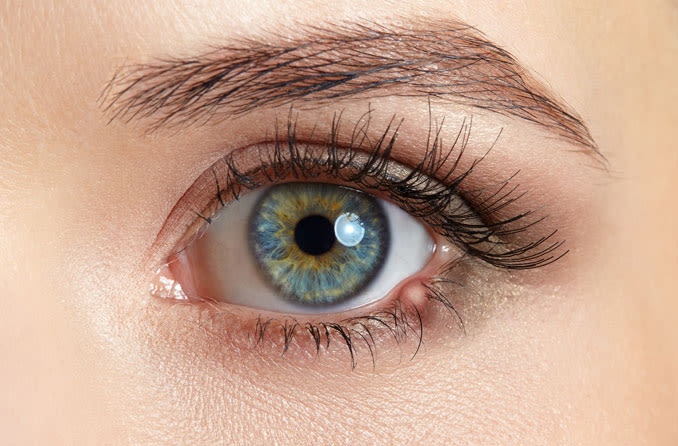 What is a stye?

A stye is an infected oil gland in the eyelid. They are usually caused by bacteria, and they often develop along the eyelid margin, where eyelashes grow. They can also occur inside the eyelid, but this is less common. Styes appear as red, swollen bumps that are painful or tender.

It is fairly common for styes to visibly fill with pus, so that they look like eyelid pimples or boils. In fact, styes, pimples and boils are very similar conditions. They are all caused by clogged, inflamed or infected oil glands. A pimple may or may not be infected, but styes and boils are, by definition, infections. According to the American Academy of Dermatology Association, a stye is a type of boil on the eyelid.

A stye looks like a red, swollen bump near the edge of the eyelid.

The technical term that eye doctors use for a stye is hordeolum (hor-DEE-uh-lum). A hordeolum is always an infected oil gland in the eyelid, but it may form in different types of oil glands. The type of oil gland that gets infected determines where on the eyelid the hordeolum will develop.

A stye that forms along the eyelash line is called an external hordeolum. This type of hordeolum is caused by an infected oil gland in an eyelash follicle. External hordeola are the most common type.

A stye that forms on the inside of the eyelid is called an internal hordeolum. This type of hordeolum is caused by an infection of an oil gland called a meibomian gland. Internal hordeola are much less common than external hordeola.

What is a chalazion?

Often, a hordeolum will become a chalazion. This happens if it doesn’t drain properly after the infection clears up, leaving behind a cyst. In rare cases, a chalazion may become infected, but it’s still not considered a stye — it’s an infected chalazion.

While hordeola and chalazia are the result of blocked and inflamed oil glands, you may have bumps on your eyelid for other reasons. Other conditions that can cause eyelid bumps include milia, skin tags, papillomas or, in rare cases, cancer.

The signs and symptoms of styes and chalazia are similar, but there are a few important differences.

Early symptoms may include the eyelid feeling especially sensitive and the eye feeling irritated or sore. The eyelid may also be red or swollen. Over time, the stye will surface and create a bump.

Both external and internal hordeola are usually sore or painful and can cause swelling of the whole eyelid. Other symptoms you may notice include:

A chalazion also forms inside the eyelid. From the outside, a chalazion looks and feels like a lump under the skin. They typically form a bit farther away from the lashes than hordeola and are not painful.

Often, there are no early symptoms of a chalazion until it grows large enough to notice. Chalazia can grow to the size of a pea in some cases. If large enough, they can push on the surface of the eye and distort vision.

Most styes are caused by a staph infection. When the oil glands in the eyelids get clogged by dead skin, dirt or makeup, bacteria like staph can get trapped inside and cause an infection. Demodex mites can also cause them by carrying bacteria into the oil glands or, in large numbers, damaging and blocking them.

Like any bacterial infection, a hordeolum is technically contagious. But it is not possible to catch a hordeolum just by being near someone who has one. Staphylococcal bacteria are commonly present on our skin, and they can also be picked up by sharing personal items and touching shared surfaces. Staph can be easily transferred to the eyes if you touch your eyes without washing your hands.

Just as you should not pop a pimple, the same is true for a hordeolum. You should never pop a stye but, instead, allow it to open on its own. Popping it can spread the infection from gland to gland and make it worse.

While anyone can develop a clogged oil gland in the eyelid, there are some potential risk factors. Poor hygiene, including not washing your hands frequently and not removing makeup, increases the risk.

Unhealthy diet, dry skin and a history of styes are also associated with these conditions. Because a hordeolum is an infection, anything that compromises your immune system, such as stress or lack of sleep, might make you more prone to them. Plus, lack of sleep often leads to rubbing your eyes more frequently, which can be a risk factor.

Having certain other conditions can also increase the risk. These include:

Some eye and skin conditions are risk factors as well, such as:

Your eye doctor can usually diagnose a hordeolum or chalazion on sight. Most of the time, neither condition requires medical treatment. Both tend to clear up on their own, and styes are so short-lived that the infection may already be healing or gone by the time your appointment rolls around.

However, it never hurts to contact your eye doctor at the first signs. Depending on your diagnosis, they may prescribe an ointment or other prescription medication to help it heal faster. Plus, they will be able to diagnose and treat any underlying causes, such as meibomian gland disease.

Getting treatment early and following your eye doctor’s care instructions can also help ensure that a stye doesn’t become a chalazion. Long-lasting styes and abnormally large chalazia do sometimes require medical treatment. This can range from oral antibiotics to surgical draining. Early treatment can help you avoid a more invasive procedure later on.

Either way, you can speed up the healing process with a few basic home remedies. First and foremost is hygiene — make sure to keep the eyelids cleansed, and never touch your eyes without washing your hands.

Warm compresses are also an important home treatment for styes and chalazia. Applying a warm, damp cloth (or tea bag) for at least five minutes a few times per day helps to unclog the oil glands and draw out infection. Or, you can find compresses at drugstores or your doctor’s office that will stay warm a little longer than cloths or tea bags.

It can also be helpful to very gently massage the inflamed area of the eyelid.

LEARN MORE: How to get rid of a stye

How to prevent a stye

Just like with home treatment, prevention begins with good hygiene. Avoid touching your eyes as much as possible, and never ever touch your eyes without first washing your hands.

It’s also important to always wash your face before sleeping, even if you don’t wear makeup. Cosmetics should never be shared, and older cosmetics should be thrown away every few months.

Following contact lens wear and care instructions is also key for prevention. Always cleanse and store contacts properly, and avoid sleeping in them or wearing them past their expiration date.

Most cases are harmless and heal up on their own without any further problems. However, complications can occur, especially if you squeeze or pop the affected area. Complications can also occur if a severely infected stye is left untreated. And, in some cases, a chalazion may lead to complications if it becomes large enough.

Squeezing or popping a hordeolum can cause the small, localized infection to spread and become periorbital cellulitis. Neglecting to get medical treatment for a severely infected stye can also allow the infection to spread to other areas of the eye.

Meibomian cyst is simply another name for a chalazion. In some cases, an internal hordeolum can turn into a meibomian cyst.

This may happen if the pus and other debris inside the clogged gland doesn’t completely drain once the infection is gone. It remains in the gland and becomes a hard or rubbery cyst. However, chalazia and other eyelid cysts can occur without stemming from a hordeolum.

These types of complications are primarily associated with chalazia, which can grow to about the size of a pea. Though chalazia usually don’t hurt, the lump under the eyelid can be quite visible from the outside. If a chalazion becomes large enough, it may cause the eyelid to droop (called ptosis) and block vision, or it may press inward onto the cornea and cause blurred vision.

In some cases, hordeola and chalazia that do not drain and heal properly can lead to scarring of the eyelid margin (called an “eyelid notch”) or, less commonly, an eyelid fistula. Improper draining and healing may also cause some eyelash loss at the site of the infection.

While styes and chalazia usually heal on their own, it’s always a good idea to see an eye doctor for additional advice. An eye doctor can provide a definite diagnosis for the eyelid bump to ensure proper treatment, as well as guide you in how to take care of it at home.

Even if you’ve already seen your eye doctor, you should schedule another visit if your symptoms continue to get worse or if the stye comes back. See your eye doctor right away if you have any changes in your vision, light sensitivity, or bleeding, blistering or crusting on the eyelids.

How to treat boils and styes. American Academy of Dermatology Association. Accessed October 2022.

What are chalazia and styes? American Academy of Ophthalmology. EyeSmart. September 2022.

Is it OK to pop a stye? American Academy of Ophthalmology. EyeSmart. March 2022.

How long does a stye last?

How do you get a stye?