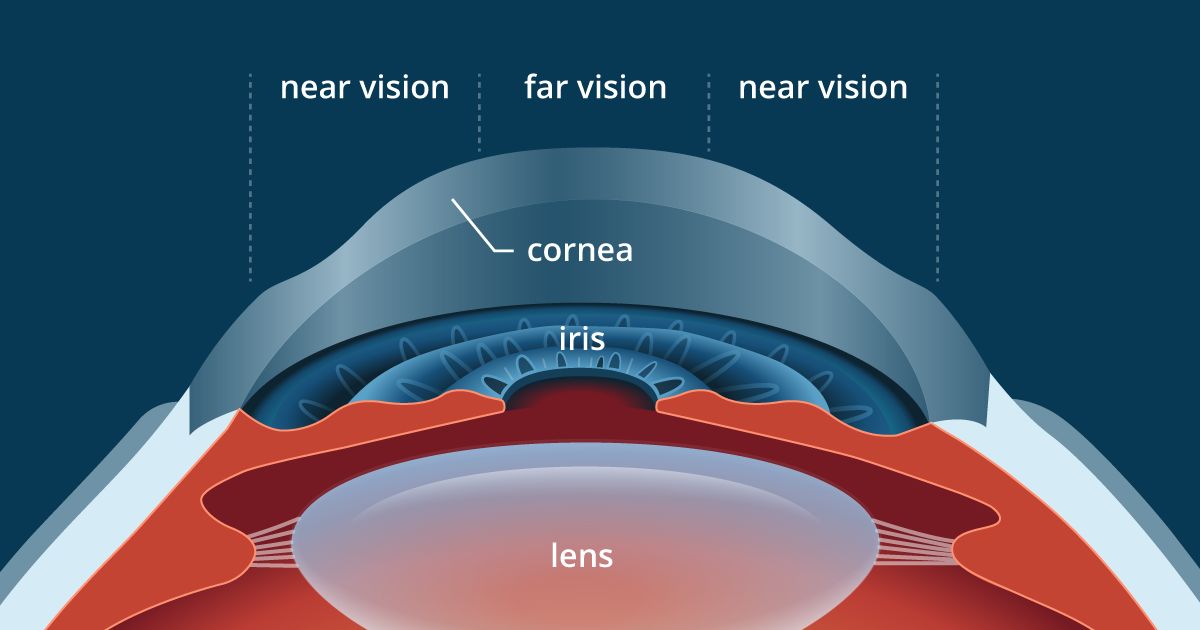 Like progressive lenses and other multifocal eyeglasses and contact lenses, multifocal LASIK corrects presbyopia, which causes near vision to blur as the eye's natural lens begins to lose its focusing flexibility later in life (generally, soon after age 40).

Manufacturers of excimer lasers and femtosecond lasers are developing multifocal corneal treatments so people with presbyopia will be able to see clearly at all distances without reading glasses, bifocals or other multifocal eyeglasses.

Just as multifocal contact lenses and progressive eyeglass lenses have different designs, various approaches are used in multifocal LASIK to determine exactly how the cornea should be shaped to achieve the best correction for presbyopia.

PresbyLASIK with distance vision in the center

"I chose this approach because of the possibility of easy reversibility to pure monofocal distance correction, should it be needed," said Dr. Epstein. "I felt this was safer than the opposite approach, where the peripheral cornea is corrected for distance and the center for near."

PresbyLASIK with near vision in the center

Jorge L. Alio, MD, PhD, professor of ophthalmology at Instituto Oftalmologico de Alicante in Alicante, Spain, prefers a multifocal ablation with the center of the cornea shaped for near vision, surrounded by a peripheral zone for distance vision.

Dr. Alio says this approach enables the surgeon to provide a stronger correction for reading and other near vision tasks. He also believes that the near-center approach causes fewer aberrations than distance-center ablations.

Click above for a video on how to determine which eye is your dominant eye.

Dr. Epstein said strong distance vision is essential with LASIK of any kind. So he favors the modified monovision approach of using presbyLASIK in one eye and wavefront-guided (custom) LASIK in the dominant eye.

Studies of presbyLASIK outcomes have shown good results, with most patients seeing 20/20 or 20/25 in the distance and being able to read newspaper print up close without glasses.

It's possible you may need to wear eyeglasses after cataract surgery or you may need additional corneal refractive surgery to regain acceptable vision for driving and/or reading without glasses.

The only way to know for sure if you are a good candidate for PresbyLASIK or some other type of presbyopia surgery is to see an eye doctor for a comprehensive eye exam. Click here to find an eye doctor near you.