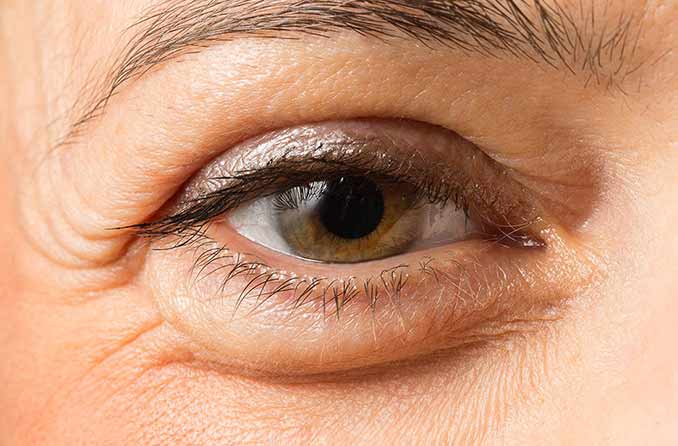 Puffy eyes and dark circles under the eyes occur for many reasons, including

Though the terms sometimes are used interchangeably, puffy eyes are different from swollen eyelids, which are caused by allergies, infection, inflammation, or trauma. [Read more about swollen eyelids and swollen eyes.]

While certain home remedies such as soothing cucumber slices — or even anti-hemorrhoid creams such as Preparation H — may temporarily relieve puffy eyes, a more long-lasting solution depends on the underlying cause.

Unfortunately, many people have puffy eyes simply because this trait runs in their family.

With aging, eye puffiness can be caused in part when fatty tissue that ordinarily protects the eye inside the bony eye socket of the skull begins to push forward and fill in spaces below the eye.

This happens because aging processes cause thinning of the membrane or "septum" that ordinarily holds back fat in both the upper and lower eyelids. As the membrane thins, the fat herniates and pushes forward, causing puffy eyes and dark circles and bags under the eyes.

Puffy eyes in the morning

When we're sleeping, we don't blink. And this is part of the reason why eye puffiness develops. 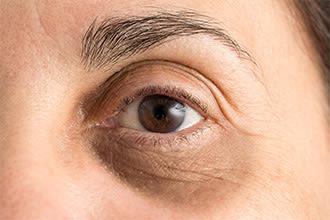 Blinking for eyelids is like walking for legs. When idle, some people develop swelling in their lower extremities that goes away as soon as they start walking and muscles in the legs begin "milking" the trapped fluids (edema), which are absorbed back into circulation.

A similar action takes place in the eyelids.

The closed, non-blinking eyelids during sleep potentially can swell in certain people prone to this problem. So in the mornings, you could wake up with puffy eyes. When you wake up and start blinking, some of the puffiness gradually goes away.

Do puffy eyes mean I have a medical condition?

Puffy eyes typically are simply due to aging, genetics, and possibly lack of sleep. But sometimes, swollen eyelids are mistaken for puffy eyes.

Unlike puffy eyes, swollen eyelids may be a sign of conditions such as:

If you’re uncertain whether you have puffy eyes or swollen eyelids that might indicate an underlying medical condition, schedule a comprehensive eye exam. Your eye doctor will be able to distinguish between the two conditions and whether additional medical testing or care is indicated.

How to get rid of puffy eyes

Many temporary remedies may help reduce the appearance of puffy eyes, such as:

If you have the same puffy appearance around your eyes as your mother or father, it's probably an inherited trait. In this case, you might want to consider cosmetic eyelid surgery to get rid of the puffiness.

Puffy eyes due to aging also can be eliminated with cosmetic eyelid surgery (blepharoplasty).

You might want to discuss with your eye doctor or cosmetic surgeon some of the other procedures available to lessen the appearance of puffy eyes and dark circles under the eyes. These include chemical peels and laser skin resurfacing.

One of the most common home remedies for puffy eyes, as mentioned above, is use of hemorrhoid creams and ointments on the skin around your eyes. A common active ingredient in these preparations is phenylephrine, which is a medication that constricts blood vessels.

This can have a potential dual effect on puffy eyelids and dark circles under your eyes:

Be aware that there are risks associated with using hemorrhoid creams for puffy eyes and dark circles. If you accidentally get these products in your eyes, you can experience a severe inflammatory response known as chemical conjunctivitis.

Before trying hemorrhoid cream or other home remedies for puffy eyes, ask your eye doctor for advice about other treatment options that are safe and more effective.

Puffy eyes are not an emergency, but (as already mentioned) they can be mistaken for swollen eyelids, which may have a serious underlying medical cause.

Therefore, it’s a good idea to schedule an exam with your eye doctor to determine whether you have puffy eyes or swollen eyelids and the most effective treatment for it.

How to whiten your eyes

Dark circles under the eyes: Causes and how to get rid of them