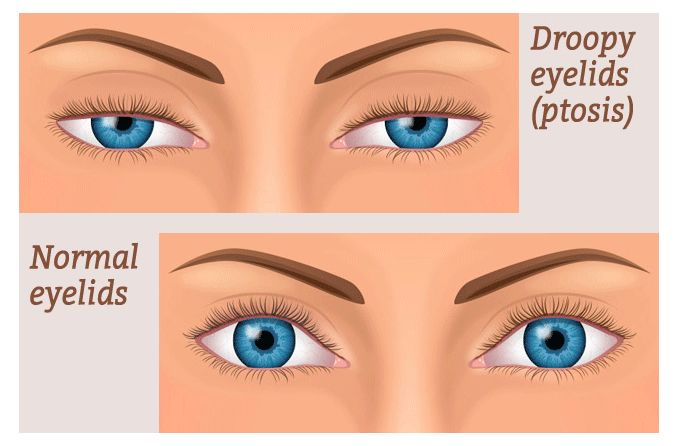 Ptosis (pronounced “TOE-sis”) is drooping of the upper eyelid of one or both eyes. The droopy eyelid(s) may be barely noticeable, or the upper lid may cover the entire pupil and interfere with a person’s vision.

Droopy eyelids more often affect older adults as a result of the aging process, and according to research published in Ophthalmology, congenital ptosis occurs in one of every 842 births in the United States.

Depending on the severity of the eyelid droop, people with ptosis may have difficulty seeing with the affected eye. Sometimes, people tilt their heads back to try to see under the droopy eyelid(s) or raise their eyebrows repeatedly to try to lift their upper eyelids higher.

Ptosis due to aging usually occurs very gradually. If you think you may be developing droopy eyelids, compare a recent close-up photo of yourself with one taken 10 or 20 years ago. This comparison will show you how much the position of your eyelids has changed over time.

Ptosis can look similar to dermatochalasis, a condition caused by a deficiency of elastin, a protein in body tissues that helps skin quickly rebound to its original position when poked or pinched.

The cause of ptosis can be chalked up to a problem with the muscles that lift the eyelids, called levators. This may be due to a nerve problem, trauma or other underlying cause.

In some cases, ptosis also can be caused by a growth or stye in the eyelid.

Children may exhibit ptosis symptoms because the levator muscles responsible for opening the eye did not develop completely or properly. Children with ptosis often tilt their heads back in order to see past their hooded eyelids. Over time, this compensation can lead to issues with the head and neck.

In older individuals, age and excessive eye rubbing can lead to stretched or weakened eye muscles, resulting in ptosis. Sagging eyelids are also a potential aftereffect of corrective eye procedures such as cataract surgery.

More serious causes of ptosis are underlying conditions, including neurological issues and eye movement disorders. In rare and unfortunate cases, ptosis can be a sign of stroke, brain tumor, or cancer of the nerves or muscles.

How to treat ptosis

Treatment for ptosis depends on the severity of the condition and the preferences of the patient. Many cases of ptosis are minor and do not negatively affect an individual’s sight or health.

However, those whose vision is impaired by the condition will likely require ptosis surgery (blepharoplasty), a procedure that usually involves tightening the levator muscles and sometimes removing extra skin, fat and tissue in the eyelid.

In rare circumstances where the levator muscles are severely weak, the surgeon may also perform a special procedure that enables the forehead muscles to help the levators lift the upper eyelids.

Surgery is recommended for significant congenital ptosis in children to enable normal vision development and prevent amblyopia in the affected eye. Some with minor ptosis may also elect to undergo this procedure if they are unhappy with their eyes’ appearance.

After surgery to repair ptosis, the upper eyelids may not appear symmetrical even though they’re higher than they were before. Rarely, some eyelid movement may be lost.

It’s important to choose your surgeon carefully, since poorly executed surgery can result in an undesirable appearance or dry eyes from lifted eyelids not closing completely.

Before agreeing to ptosis surgery, ask how many procedures your surgeon has done. Also ask to see before and after photos of previous patients, and ask if you can talk to any of them about their experience.

Can ptosis be cured?

Yes and no. Ptosis surgery can restore your droopy upper eyelids to a more normal position and the effects of the surgery are usually long-lasting.

However, after a number of years, some eyelid drooping may return.

When to seek help

While droopy eyelids are usually harmless and no cause for alarm, there are certain instances in which an eye doctor should be seen promptly. According to professionals at Harvard Health, these circumstances include:

It's important for parents to observe their baby’s eyes to see if the eyelids look uneven, if their eyes appear to be two different sizes, or if they frequently tilt their head up in order to see. These are all indications of ptosis and should be addressed by an eye care professional.

If you notice eyelid drooping in your child — or any other eye- or vision-related change — an appointment with an eye doctor is indicated.

Older individuals whose vision is obstructed by age-related eyelid drooping should also schedule an appointment with their eye doctor. An eye care professional can discuss treatment options and establish if surgery is a good option.