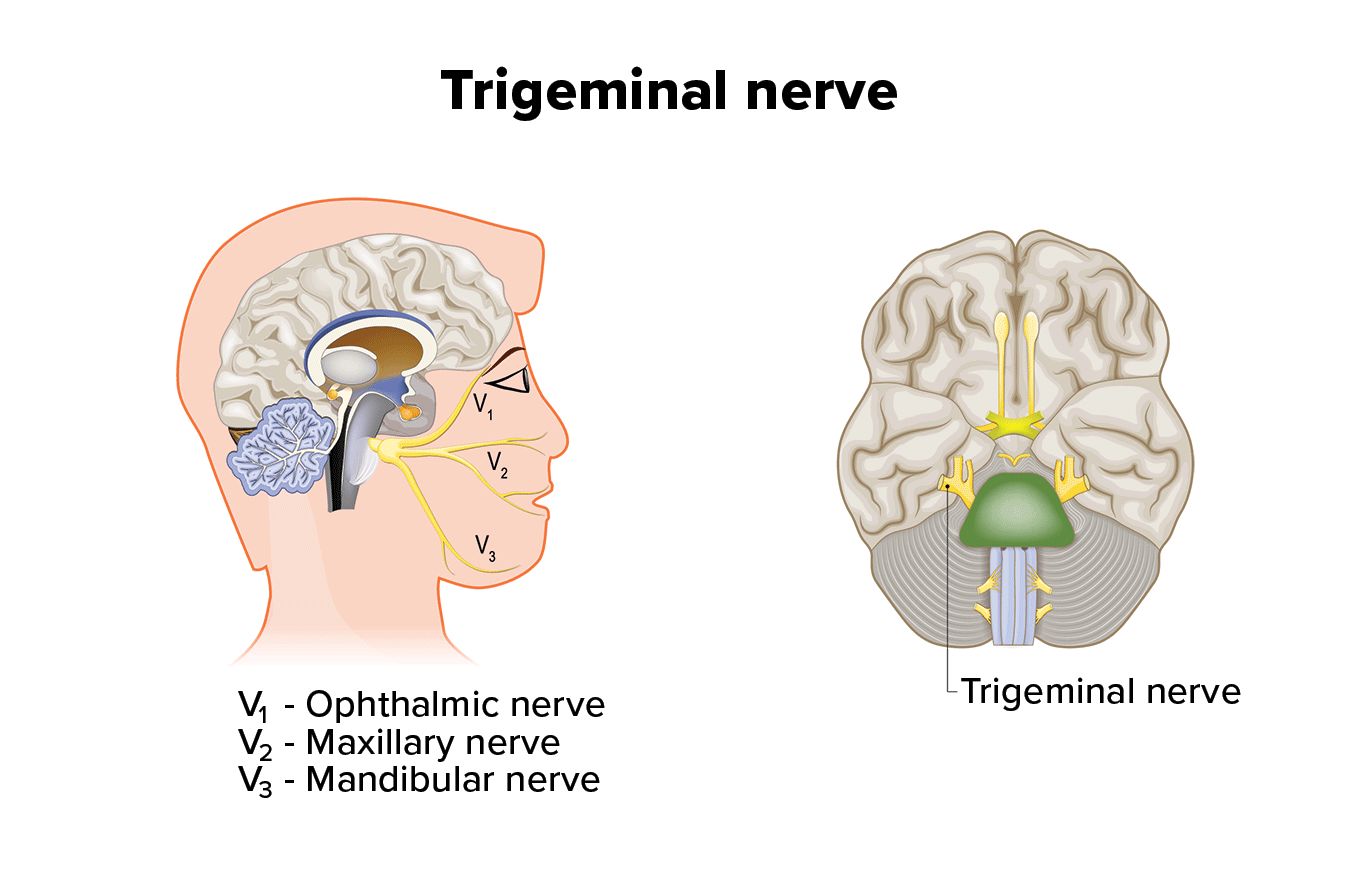 What is the trigeminal nerve?

Of the 12 cranial nerves, the trigeminal nerve is the largest. It has three branches that split off into the upper, middle and lower parts of the head and face.

Damage or irritation to the trigeminal nerve can result in severe pain or numbness.

There are two trigeminal nerves — one on each side of the body. The nerves start in the brain and extend throughout the face and head.

The trigeminal nerve starts as four different nuclei: Three sensory and one motor. The sensory nuclei combine to form what’s known as the “sensory root.” By itself, the motor nucleus creates the “motor root.”

The three trigeminal nerve branches include:

The motor root also innervates the tensor tympani muscle located in the middle ear. Because of this, the mandibular branch is considered both a sensory and motor nerve.

The function of the trigeminal nerve includes sending sensory and motor signals to the face. Sensory information provided by the nerve includes temperature, pain and touch.

The motor portion in the mandibular branch connects to the primary muscles used in chewing.

The motor portion also connects to muscles in the inner ear.

The trigeminal nerve also supplies motor nerves to the front two-thirds of the tongue, but does not supply the sense of taste.

Problems that can affect the trigeminal nerve

Problems with the trigeminal nerve often present as pain, numbness and weakness in the affected area. The area may be as small as a portion of your gum, or as large as half of your face, depending on the location and extent of the damage.

Injury to the trigeminal nerve often heals and returns to normal over time. When severe damage affects the nerve, surgery to repair or replace the nerve may be needed.

Trigeminal neuralgia (TN) is a condition in which damage to cranial nerve 5 causes severe pain in an area of the face. The pain is sudden and sporadic, and is often compared to an electric shock.

There are two types of trigeminal neuralgia that are differentiated by their symptoms.

Type 1 (TN1) is characterized by intermittent but intense facial pain that may last anywhere from a few seconds to a couple of minutes. Episodes can occur periodically or constantly during the day and night. They are often triggered by talking, chewing or touching the affected area.

Type 2 (TN2) affects patients differently in that it creates a constant, duller pain than what’s experienced in TN1. While stabbing pain is possible, people with TN2 usually describe their pain as burning or aching.

Damage to cranial nerve 5 is what causes TN. Nerve damage could be caused by one or more of the following:

How do you treat trigeminal neuralgia?

Treatment for TN depends on the cause. Usually, doctors will start by prescribing medication to relieve or eliminate the symptoms. This is because surgery for TN carries a number of risks. If pharmaceuticals do not effectively treat the condition, surgery will be done.

Wallenberg syndrome is a condition that occurs when a portion of the brainstem, called the medulla, gets damaged. Damage to the medulla usually occurs due to a stroke.

Lesions in the medulla can result in sensory loss in areas of the trigeminal nerve as well as trigeminal nerve pain. Treatment for this condition is symptomatic, which means the problem itself cannot be treated; only the symptoms you experience from it.

Reports say that gabapentin, an anti-epileptic drug, is often successful in treating patients who experience pain related to the condition.

It’s important to see a doctor if you notice sudden intense nerve pain in your face, or anywhere else on your body. This also goes for a sudden, unexplained headache with sharp, intense pain.

Seek medical attention if you experience any unexplained numbness or weakness, especially if it’s only on one side of the body. While this may indicate a nerve problem, it may also be a sign of a stroke.

Remember what to look for if you believe you or someone else is having a stroke. A helpful acronym to recognize symptoms is BE FAST:

B – balance problems, such as dizziness, stumbling, etc.

E – eye problems, such as blurry vision or double vision

A – arm weakness, or the inability to raise both arms equally at the same time

S – speech difficulties, such as slurring or rearranging words in sentences