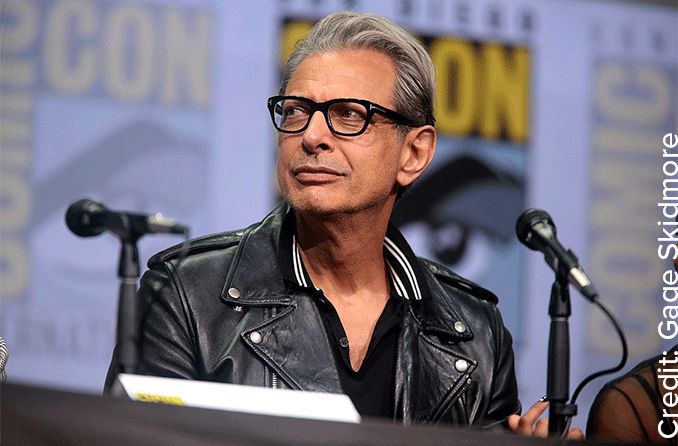 Glasses and Jeff Goldblum go hand in hand. He dons them almost everywhere, in movies, on the red carpet, in magazines and in interviews. In fact, it’s difficult to imagine Goldblum not wearing glasses.

As a multi-award-winning movie, TV and stage star, Goldblum’s got more than 100 acting credits under his belt. His impressive talent for playing memorable characters across a wide array of genres has made him a household name, sporting his trademark glasses in almost every role.

Take scientist Seth Brundle who is transformed into an insect in the sci-fi cult-classic The Fly (1986) or computer nerd David Levinson who saves the world in the blockbuster action film Independence Day (1996).

Undeniably, Goldblum’s most popular character is mathematician Dr. Ian Malcolm in the action-adventure flick Jurassic Park (1993) in which he’s constantly running away from man-eating dinosaurs.

One of the most famous faces in Hollywood, recognized — of course — for his acting chops, but perhaps almost as much so for his eyewear.

Goldblum leans toward statement-making eyewear that’s both practical and fashionable. Some of his most eyeconic glasses and sunglasses styles, outlined by color palette and shape, include:

Notoriously neutral black is the perfect choice for accessorizing as it mixes and matches easily with almost any outfit, from casual to formal, and as everyone knows, black never goes out of style.

On and off the camera, Goldblum is perhaps most often seen in black sunglasses and glasses in various frame shapes, including:

Light-colored and nearly invisible clear glasses take a back seat on the face and let other features, like the eyes and cheekbones, shine through. For a put-together guy like Goldblum, this color (or lack thereof) serves him well, no matter the occasion.

Some as-seen-in pale and clear eyewear styles seen gracing the face of Goldblum include:

The distinctive mottled pattern of faux tortoiseshell offers a welcome change from the ordinary.

In nature-inspired glasses, Goldblum steps it up to put his best face forward, especially in these frame shapes:

Keeping it basic, metallic glasses and sunglasses in hues of silver, gold and rose-gold afford a subtle yet striking look.

Goldblum, ever the sartorial superstar, is well-suited in a variety of metal frame shapes, including:

An accomplished actor — and one of the highest-paid Hollywood stars with a net worth in the millions — Goldblum focuses on living his best life in eye-catching eyewear.

In 2014, he married Emilie Livingston — presumably wearing his signature specs — and he, his wife and two sons set up house in Los Angeles. Never resting on his laurels, he continues to seek out new and exciting projects, including traveling the planet in his docuseries The World According to Jeff Goldblum and releasing an album by his jazz band in 2019.

From globe-trotting adventures and soulful music to eccentric stage and screen characters, Goldblum inspires his multitude of fans. And as a true lover of eyewear, he also inspires with his passion for sleek and stylish eyewear.