Everything you need to know about aviator glasses 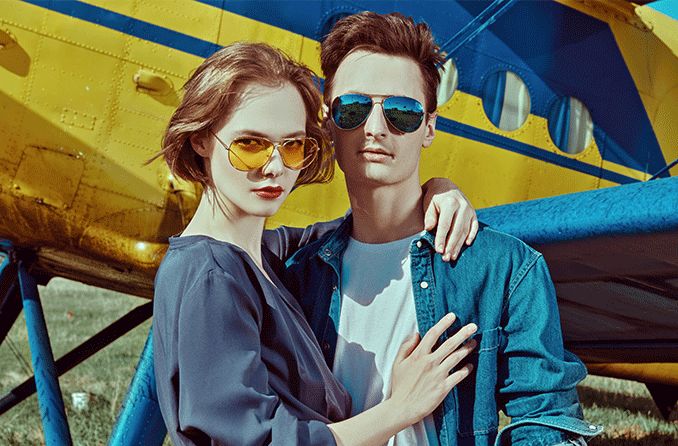 Aviator glasses are a true classic. With their distinctive design — the thin metal frame, double bridge and teardrop-shaped lenses — they’re arguably the most recognizable eyewear style in the world. Also known as pilot glasses, they have been around for nearly a century, ascending from American test pilots to Hollywood stars and becoming a timeless style accessory.

In this ultimate guide, we’ll take you through everything you need to know about aviator glasses: the history behind them, who’s worn them, who should wear them, who makes them, available styles and more.

The beginnings of aviator glasses, as the name suggests, are tied to pioneering advancements of aviation. In the early 1900s, in the wake of World War I, daring test pilots began to fly ever higher and faster into the sky.

As speed and altitude records were being broken, new problems arose: Many pilots were reporting that the glare from the sun was causing them to experience headaches and nausea. In an effort to defend themselves against the blinding sunlight and temperatures as low as minus 80 degrees Fahrenheit, they sought to protect their eyes with fur-lined goggles.

But when, in 1920, Capt. Rudolph “Shorty” Schroeder pushed his biplane up above 33,000 feet, his goggles fogged up, leaving him with no other choice than to remove them. Within minutes, his eyes were frozen over.

Amazingly, Schroeder managed to safely land his plane. When U.S. Army Air Corps Lieutenant John Macready pulled him out of the cockpit, he was shocked to see Schroeder’s badly swollen and bloodshot eyes.

Haunted by this image, Macready decided that something needed to be done to protect pilots’ eyes from the harshness of the elements high above the clouds. He partnered with medical equipment manufacturer Bausch & Lomb to develop special aviation goggles. Those goggles eventually morphed into glasses, and so the aviators were born.

From pilots to the public

They featured a plastic frame in the now-iconic aviator shape with large, teardrop-shaped lenses that ran along the cheek line and effectively covered two to three times the size of the eye socket. The green lenses were designed to block out light without obscuring pilots’ vision.

Because of this ability to ban the sun’s rays, they were called Ray-Ban and re-launched a year later with a metal frame as Ray-Ban Aviator sunglasses.

Although developed for pilots, they weren’t initially labeled aviators when they went on sale to the public in 1937. Instead, they became popular for use in outdoor activities including fishing, hunting and golf, which led to the introduction of new models, including aviator shooting glasses.

In 1938, the Ray-Ban Shooter model was released in both the green lens and a pale yellow Kalichrome lens designed to sharpen detail and minimize haze. The yellow lens filtered out blue light, which made it ideal for misty conditions.

Meanwhile, the Ray-Ban Outdoorsman launched the following year in 1939. The Outdoorsman targeted shooting enthusiasts and featured the signature middle circle “cigarette holder” in the bridge to free the shooter’s hands.

At the height of World War II, aviator sunglasses became a distinctive symbol of military style after renowned General Douglas MacArthur was photographed wearing them during the landing on a beach in the Philippines. The photograph was printed in newspapers across the U.S. and became a defining image of World War II.

From function to fashion

With the rise of military influence on everyday fashion from the late 1940s onward, the appeal of aviator sunglasses gained momentum. This continued through the 1950s, largely thanks to stars like Marlon Brando, who wore them in the 1958 flick “The Wild Ones” as an unmistakable fashion statement.

Transitioning from function to fashion, aviators quickly turned from military eyewear to the epitome of cool.

Ray-Ban started to advertise its aviator sunglasses as the perfect balance of style and practicality. To keep up with consumer demand, they continued to update the classic military model with new releases such as the 1957 Ray-Ban Caravan, a squarer version of the classic frame. Caravan was later worn by Robert De Niro in the 1976 film “Taxi Driver.”

In 1958, a dedicated women’s line was introduced, including frames in different colors with decorative flourishes such as rhinestones. It was then that the aviators’ ascent from practical eyewear to an aspirational style accessory truly began.

Paul and Linda McCartney wore matching pairs in a family portrait with their kids. Queen frontman Freddie Mercury was photographed sporting a white vest and nonchalantly looking over his shoulder, his aviators’ dark lenses reflecting the sunlight.

Aviators were everywhere and became as iconic as the people wearing them.

The 1970s also saw aviators (both sunglasses and clear opticals) become popular with women after a wave of female icons adopted this traditionally male style as a bold fashion statement.

But it was arguably the 1980s that truly solidified the aviator’s enduring place as a symbol of classic American culture. Take, for example, Michael Jackson’s appearance at the 1984 Grammys wearing a pair of black Ray-Ban Aviator sunglasses, or A-list couple Sean Penn and Madonna dodging the paparazzi in theirs.

The frames became a cult fashion accessory with the 1986 release of the movie “Top Gun,” which saw hotshots Tom Cruise and Val Kilmer flaunting them in a nod to their fighter pilot roots. “Top Gun” boosted Ray-Ban Aviator sales by 40%.

Through the 1990s and 2000s, aviators remained on the faces of popular cultural icons such as New York socialites Paris Hilton and Nicole Richie, rapper Kanye West and film stars like Brad Pitt, Julia Roberts, Daniel Craig and Jennifer Aniston.

In 2010, it was Ray-Ban that put aviators back in the spotlight. Ray-Ban commissioned celebrated rock photographer Kevin Cummins to make portraits of music icons — Iggy and the Stooges, The Virgins, The Big Pink, We Are Scientists and others — wearing various styles from the Ray-Ban Aviator collection.

To this day, aviators are a symbol of American cultural significance. Even President Joe Biden has become inextricably linked with his Ray-Ban Aviator sunglasses, which he says he has worn for decades.

Who looks best in aviator glasses?

With their universal style, aviators look great with practically any face shape. As a general rule, eyewear looks best when it offers some contrast to the wearer’s face. In other words, the shape of your glasses should be the opposite of the shape of your face.

That’s why the rounded, teardrop shape of the classic aviator style best matches angular faces. That said, with so many styles available, wearers with round faces can definitely also find a suitable pair. The best way to know for sure is, of course, to try them on.

While aviator frames are typically associated with sunglasses, the past few years have seen a resurgence of clear aviator glasses and aviator prescription glasses. With the advent of the geek and hipster styles, the rise of retro aviator spectacles has been unstoppable. The oversized wire-rimmed frames have increasingly become a bona fide fashion statement.

Celebrities including Kendall Jenner, Kim Kardashian West, Bella Hadid and Frederikke Sofie ignited the trend in the fall of 2017. Where these tastemakers go, the masses follow.

And of course, that’s because these fashion trendsetters know what they’re doing. The instantly flattering power of a clear, gold-rimmed frame subtly highlights cheekbones. The oversized lenses easily minimize any signs of puffiness around the eyes.

Aviators are a gender-neutral style. Most models are suitable for both men and women.

Several design houses have added clear aviator glasses to their repertoire and offer a number of different interpretations. Below is a round-up of some available styles.

While the original aviator frame is attributed to Ray-Ban, which was part of Bausch & Lomb, almost all eyewear brands have incorporated aviator designs into their collections. There are many different interpretations of the iconic aviator style. Available models vary in shape, color and materials, from simple to simply outrageous.

The originator of the style, Ray-Ban is one of the world’s top-selling eyewear brands and is now owned by EssilorLuxottica, which bought them in 1999. Ray-Ban is equally well known for its Wayfarer style, but the Aviator is where it all began.

When ordering, Ray-Ban customers can customize their aviator glasses. They can choose the color of the frames, details and lenses, add prescription lenses and include a personalized engraving.

Named after Alberto Santos-Dumont, the Brazilian aviation pioneer, Cartier’s Santos aviator glasses are crafted in France. They are adorned by the fashion house’s signature screws at the temples and share DNA with the legendary Santos watch. Cartier offers 25 different Santos de Cartier models.

Having worked at Gucci and Yves Saint Laurent, Tom Ford knows a thing or two about fashion. His Blue Block Pilot Opticals glasses are nothing short of beautiful. They’re made in Italy from silver-tone metal and accented with subtle branding at the temples.

Available in three versions, Chanel Pilot eyeglasses are the epitome of elegant style. And with the iconic French fashion brand making its online debut last summer, you can now order their eyewear on the internet, complete with virtual try-ons.

Edgy yet feminine, the Michael Kors Procida glasses give the classic aviator shape a designer makeover, with bright metal frames, a straight-edge top bar, and the Michael Kors logo on the side of the arms for a bold touch. The slimline metal arms, plastic nose pads and temple tips ensure a comfortable fit.

You don’t need to spend hundreds of dollars to get a stylish pair of aviator glasses. After all, the term cheap glasses does not always mean low quality.

Most mid-range fashion brands offer the classic style at an affordable price. From online retailers like Asos or Amazon to affordable fashion stores such as Target, J. Crew or Forever 21, there are plenty of cheap aviator glasses available. Even Walmart has an extensive selection of aviators for sale.

If you’re buying cheap aviator sunglasses just make sure they provide 100% UV protection to adequately shield your eyes from the sun’s harmful rays.

How to get your own aviator glasses

If you have decided that aviator sunglasses are for you, you can buy these and many other styles direct from Ray-Ban or from many online retailers, like FramesDirect.com, or from local optical stores.

Many aviator frames are also available as prescription glasses. Make sure to visit your eye doctor to get a current prescription before ordering your favorite style.

Aviator sunglasses: How do you wear them?

What are mirrored sunglasses?

Types of sunglasses: A user’s guide

Ray-Ban Wayfarer sunglasses: Why they define cool, and how to choose a pair

What are Clubmaster sunglasses?