Do more animals have heterochromia than humans? 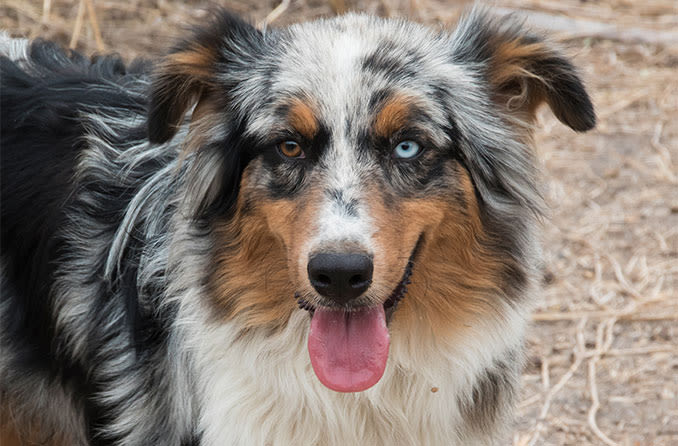 A dog or cat with two different colored eyes is a quirky trait that many pet owners appreciate in their furry companions. Some people even go as far as seeking out specific breeds who boast the unique feature.

This characteristic is called heterochromia, and while it also occurs in humans, it is more commonly seen in animals.

It’s possible for injury or illness to cause heterochromia in animals, but cases are almost always genetic. Different colored eyes are most commonly found in certain breeds of domesticated animals like cats and dogs.

Like humans, cats have genes that determine the color of their eyes and fur. When it comes to the color, length and texture of their coats — essentially what determines the breed — there are many different genes at play to determine how a cat will look.

For instance, the epistatic white gene is a dominant gene in cats that will overpower any color gene and make a cat appear completely white. In contrast, the white spotting gene produces a coat with two or more colors.

There are instances in which these genes prevent melanin (color) from reaching one of the eyes. Thus, a cat with two different colored eyes.

The color of a dog’s fur can determine the likelihood of the dog having heterochromia. Pups with a lot of white in their fur, especially when it’s near their heads, have a higher chance of exhibiting two different colored eyes.

Dogs typically have golden or dark brown eyes, which signifies an excess of piment. Since fur color and eye color are delivered by the same gene, if white fur (a lack of pigmentation) is present near the eyes, it’s likely that the eyes will lack pigmentation as well.

This lack of pigmentation results in blue eyes. While many breeds have both eyes affected by this, it’s also common for one eye to remain dark, resulting in heterochromia.

Two different colored eyes in humans can be the result of genetics, injury or medication.

If a baby is born with heterochromia, it is considered congenital and caused by specific gene mutations. Cases that develop after early childhood are called acquired heterochromia and are typically caused by trauma to the eye, certain medication or an underlying condition.

While there are many genes at work to determine how a person looks, OCA2 and HERC2 are the main two responsible for eye color. Depending on if or how the genes mutate — which is pretty unpredictable — heterochromia could result and appear as complete, sectoral or central.

Complete heterochromia is characterized by having two completely different eye colors (for example, one blue eye and one green eye). Sectoral heterochromia is when a splash of color is present in the iris that differs from the rest of the eye color.

Central heterochromia is often mistaken for hazel eyes, though the two are different. Eyes with heterochromia have a distinct ring of color around the pupil that differs from the rest of the eye. Hazel eyes are simply a blended mixture of color throughout the entire iris.

Why is heterochromia more common in animals than humans?

To put it tastefully, animals are commonly known to breed within their own gene pool. So, if two cats from the same litter share the gene for heterochromia and they then mate and produce offspring, the offspring is more likely to carry on the trait.

Inbreeding is not acceptable among humans, and because it’s rare, the trait is typically masked by more dominant genes. However, if two individuals with heterochromia were to produce offspring, the chances for an offspring with heterochromia are much higher.

READ MORE: How rare is heterochromia?