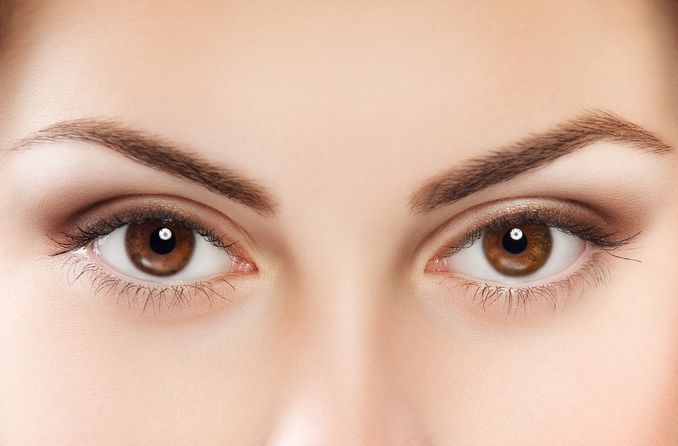 In the United States, an estimated 41% of the population has brown eyes — including dark brown eyes, light brown eyes and honey brown eyes. If you include hazel eyes (sometimes called hazel brown eyes), the prevalence is even higher.

But a high prevalence of brown eye color doesn't mean all brown eyes look the same. There is plenty of variation in the appearance brown eyes (even within a given shade) from person to person.

READ MORE about the most common eye colors.

Even though there are different eye colors, including less common blue eyes and green eyes, there is only one type of eye color pigment. The amount of this pigment (called melanin) in the iris of your eye determines the color of your eyes.

Eyes with very little melanin in the iris are blue. Eyes with a bit more melanin are green, hazel or light brown. And those with a high concentration of melanin are medium or dark brown.

Eye color is an inherited trait. But predicting eye color from your family tree is more difficult than you might expect. In fact, there is evidence that up to 16 genes can influence eye color.

So it's very possible for children in the same family to have different eye colors — including colors different than those of their parents. Due to complex variations and interactions of genes, it's hard to say with certainty what color eyes a child might end up with.

Also, the eyes of many Caucasian babies contain very little melanin at birth and will appear blue the first few months of life. But within 12 to 18 months, more melanin can accumulate in the iris, causing eye color to change from blue to green, hazel or brown.

What are the benefits of brown eyes?

If you have brown eyes, you'll be happy to know they have been associated with some health benefits.

Also, people with brown eyes have a lower risk of type 1 diabetes and melanoma of the eye, compared with individuals with light blue eyes.

And research at the National Hospital for Neurology and Neurosurgery in London suggests people with brown eyes have less risk of hearing problems from environmental noise pollution than coworkers with blue eyes. The study authors felt melanin pigment may help protect nerves in the brain from noise-induced damage.

But it's not all good news for people with brown eyes.

Also, researchers in Australia found that people with dark brown eyes were more likely to develop cataracts than people with lighter-colored eyes. So, be sure to wear sunglasses that protect your eyes from UV radiation outdoors if you have brown eyes. (In most cases, polarized sunglasses offer the greatest comfort in bright sunlight.)

The students who were photographed were told to assume neutral, non-smiling expressions and not to wear any makeup or jewelry. All photos were cropped so that the eyes were always horizontally at the same height with a standard length of neck visible. Only photos of individuals with blue eyes or brown eyes were used in the study. Photos of students with hazel or green eyes were excluded.

But it's a little more complicated than that.

The researchers found a relationship existed between eye color and face shape, and that the shape of a person's face also plays a key role in the perception of trustworthiness.

Brown-eyed faces tended to have:

In contrast, blue-eyed faces were characterized by:

"Brown-eyed individuals tend to be perceived as more trustworthy than blue-eyed ones," explained the study authors. "But it is not brown eyes that cause this perception. It is the facial morphology linked to brown eyes."

What if you want a rarer eye color?

And these lenses are available even if you don't need correction for nearsightedness, farsightedness or astigmatism.

Not interested in colored contacts but want to know other ways to make your brown eyes "pop"?

If you wear eyeglasses, ask your optician to show you how different frame colors can complement and enhance your brown eyes.

And choose lenses with anti-reflective coating to help showcase your eye color. AR coating eliminates annoying reflections in your eyeglasses, allowing others to see the beauty and expressiveness of your brown eyes.

You might also want to consult with a professional aesthetician to discover the best eyeshadow and makeup for brown eyes. The right choices for you will depend on a number of factors — including your hair color and skin tone as well as the depth of the pigment in your brown eyes.

To keep your beautiful brown eyes healthy and seeing clearly, have routine eye exams at least every two years.

Why are brown eyes most common? American Academy of Ophthalmology. April 2017.

Can't hold a drink or cope with pain? Blame the colour of your eyes. Daily Mail. June 2014.

What Is the Rarest Eye Color?