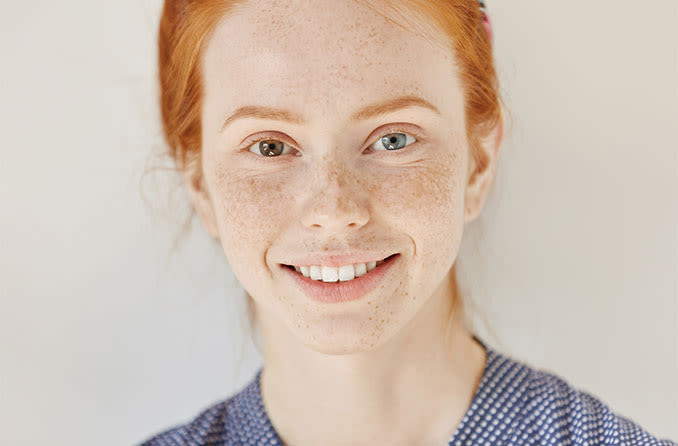 Heterochromia is when someone has more than one eye color. In many cases, this means each eye is a different color. For example, one eye is brown and the other eye is green. It can also mean there are at least two different colors in parts of one eye or both eyes.

If you've ever asked, “What is it called when you have different-colored eyes?,” the answer is heterochromia.

Heterochromia is a rare condition that affects the iris, the colored part of the eye. A pigment within the iris called melanin gives eyes their distinct color.

A genetic mutation is believed to cause almost all congenital forms of heterochromia. The mutation is benign, meaning that it doesn’t relate to an underlying disease or illness and won’t cause any harm.

This random genetic “surprise” affects the melanin levels in different parts of the iris(es). Of the common eye colors, brown eyes have the most melanin and blue eyes have the least.

Animals can have heterochromia, too. At some point, you’ve probably noticed a Siberian husky, Australian shepherd or border collie with two different-colored eyes. Along with other domestic animals, these dogs experience the same genetic phenomenon as humans.

Heterochromia is usually harmless when present from birth or early development (congenital heterochromia). But it can also point to an underlying condition.

Less commonly, heterochromia can occur later in life due to disease, injury or the use of certain medications. This is called acquired heterochromia.

When heterochromia is acquired, it may be the result of:

LEARN MORE ABOUT the causes of heterochromia.

Types and symptoms of heterochromia

A condition called anisocoria can easily be confused with heterochromia, which was often the case with David Bowie. Anisocoria gives the appearance of two different eye colors. In reality, the variation only relates to unequal pupil size — which can cause one eye to look darker than the other — not the actual eye color.

Different forms of heterochromia can affect skin and hair, so attaching iridum or iridis says that only the eyes are affected.

Since most lifelong cases of heterochromia aren’t harmful, they won’t need to be diagnosed by a doctor.

When a baby is born with heterochromia, their doctor may recommend having an ophthalmologist (medical eye doctor) look at their eyes. This is a normal process and not a cause for concern. It’s only used to rule out any rare conditions.

When heterochromia occurs or changes later in life, an eye doctor will need to perform a comprehensive eye exam.

Heterochromia is usually a harmless genetic trait. In these cases, it doesn’t need to be treated.

If a medical professional has determined that your heterochromia is due to an underlying condition or illness, treatment may be needed. Speak to your doctor about any questions you may have regarding developing a treatment plan.

Q: Is having heterochromia, or different-colored eyes, a bad thing?

A: Not usually, but it depends on the cause. Congenital heterochromia is usually harmless and rarely reflects an underlying illness. However, acquired heterochromia may be caused by certain glaucoma eye drops, eye injury or disease, and it can reveal a problem. If you notice a rapid change in your eye color, see an eye doctor.

Q: Is heterochromia more common in males or females?

A: Heterochromia is more common in females than in males based on a study performed several decades ago in Austria.

Q: What’s the difference between central heterochromia and hazel eyes?

STILL HAVE QUESTIONS? Read more of our Heterochromia FAQs