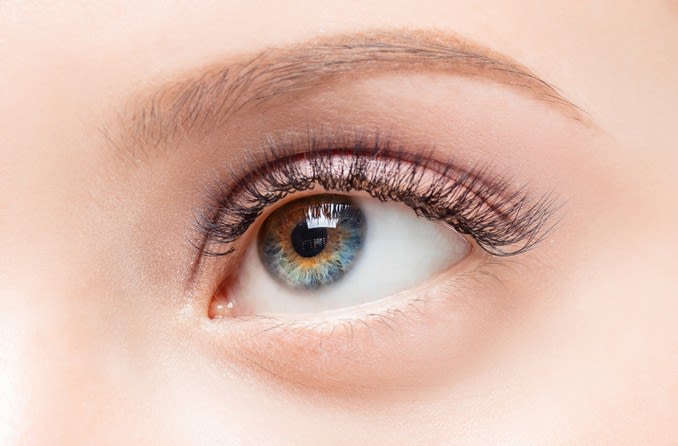 Central heterochromia is when the inner ring of the iris — the eye color closest to your pupil — is a different color than the outer ring, along the edge of your iris. This trait usually involves both eyes, with two separate colors appearing in each eye instead of one. Central heterochromia is almost always harmless when you’re born with it.

The visual appearance of central heterochromia comes down to a pigment called melanin — the same pigment that determines the color of your skin.

When melanin is distributed differently closer to the pupils, light reflects off of it in a different way and gives the appearance of two different colors in each iris.

A common form of central heterochromia shows up as predominantly blue eyes with a smaller ring of brown in the center streaking outward. It even gave one of the world’s most famous photographs a visual wow factor.

Sharbat Gula, the subject of Steve McCurry’s 1984 National Geographic photo "Afghan Girl," likely had this unique trait. Look carefully and you’ll notice a light sea-green color in the center of her irises that radiates toward a dark blue-green hue along the outer edges.

But beauty is in the eye of the beholder, so we’ll let you decide which is the most attention-grabbing.

SEE RELATED: How eye color develops, and why it changes

The family gene pool is almost never responsible for any form of heterochromia. There is a slight chance it can get passed down from parent to child, but it’s unlikely.

Instead, central heterochromia is usually a random (but harmless) genetic mutation that happens sometime during development — and one that doesn’t happen all that often. When multiple eye colors are present at or shortly after birth, it is known as congenital heterochromia.

Like the two other forms of this trait, central heterochromia can also be caused by an underlying medical condition, trauma or medication when it shows up later in life. This is classified as acquired heterochromia. Possible causes include:

While cases of acquired heterochromia are rare, make sure to schedule a comprehensive eye exam with an eye doctor if you notice any sudden changes in your eye color.

How rare is central heterochromia?

Complete heterochromia is definitely rare — fewer than 200,000 Americans have the condition, according to the National Institutes of Health. That’s only about six out of every 10,000 people.

It’s currently unknown how rare central heterochromia is, but we do know that it isn’t quite as rare as complete heterochromia.

Much of this comes down to the fact that central heterochromia is hard to document, and, unless it’s acquired later in life (causing a change in eye color), it doesn't necessarily need to be documented. There are fewer questions about it because, unlike complete and sectoral heterochromia, it doesn’t seem out of the ordinary.

Having central heterochromia can actually be confused with having hazel eyes, though there are a few differences. The colors in hazel eyes can appear to change in different lighting, and they tend to blend together more as they radiate away from the pupil. With central heterochromia, each ring of color is distinct within the iris.

READ MORE: What is the rarest eye color?