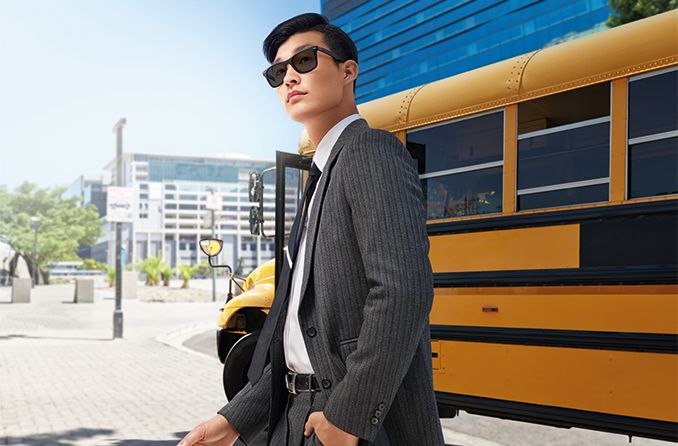 It has been nearly two thousand years since Emperor Nero held a concave emerald to his eyes to better see his gladiators fight in the bright Roman sun. Today the technology for refracting and filtering light is so sophisticated we can truly adapt our glasses to our lifestyle.

One big question for many who wear prescription glasses is: Which are better, photochromic lenses that darken automatically when exposed to sunlight, or switching between regular glasses indoors and sunglasses outdoors?

The answer depends on your lifestyle. How much time do you spend indoors or outdoors, how many hours are you in front of a computer, how often do you drive, and do you regularly participate in sports like skiing or boating where protection from sun glare is especially important?

Both photochromic lenses and sunglasses protect us from the sun’s harmful ultraviolet (UV) rays, which can damage the eyes. UV light has been linked to cataracts, macular degeneration and pterygium (also called “surfer’s eye”), a pinkish growth or bump on the eyeball.

Let’s look at the two options to protect our eyes and the particular benefits of photochromic lenses and sunglasses.

What are the benefits of photochromic lenses?

What are photochromic lenses?

Photochromic lenses — also called “transition” lenses — are marvels of technology that adapt to light. These lenses darken when exposed to UV light from the sun and lighten to become clear when indoors in softer light or at night.

Convenience and visual acuity are two distinct benefits of photochromic lenses. Instead of carrying around two pairs of glasses, you need only wear one. The lenses transition imperceptibly from clear to tinted and return to clear in a matter of minutes.

One pair for indoors and outdoors

“Photochromic lenses are great because you don’t have to think about putting glasses on and taking them off,” says optometrist Amy Henderson, an assistant professor at the University of Alabama in Birmingham.

The depth of tint depends on the amount of sunlight, which means that even on a cloudy day outside, the lens will darken somewhat. Some photochromic lenses are designed to respond to all visible light, which allows them to darken inside a car when driving on a sunny day.

Photochromic lenses are good for eye health, because, Henderson says, “UV protection is already embedded in the glass.” Their 100% UVA- and UVB-protective coating shields eyes from harmful ultraviolet sunlight.

SEE RELATED: What are photochromic sunglasses?

A shield against blue light

Too much blue light, especially at night, can disrupt sleep cycles by suppressing melatonin, a natural hormone in our bodies that helps regulate sleep and waking.

Options in tints and coatings

Photochromic lenses can be tailored to your individual needs. If you just need readers for near vision, you can get progressive photochromic glasses and reap all their benefits.

Numerous tints are available. “The glasses come in blue, green, gray, brown and even a beautiful rose-gold tint,” Henderson says. “Rose-gold is one of the prettiest lenses I’ve ever seen.”

Anti-reflective coatings or mirror coatings can be added, and the glasses can be polarized to reduce glare. They can be ordered in an extra dark version for those who are often outdoors or who want their lenses to tint while driving.

Extra-dark lenses darken to 85% opacity in direct sunlight, 30% inside a car on a sunny day, and always retain a slight tint indoors. Some people love that slight tint, but others may not.

Photochromic lenses are somewhat temperature dependent and will darken more in colder temperatures.

In 2019, the first contact lenses with photochromic lenses debuted as Johnson & Johnson Vision rolled out Acuvue Oasys with Transitions contacts in the U.S.

Hammond co-authored a study on photochromic lenses and visual performance.

"Photochromic lenses get about half as dark as most sunglasses,” Hammond notes. “But when you measure the visual response to brightness, more darkening does not necessarily help increase comfort.”

He says that sunglasses are usually very dark for aesthetic reasons.

Photochromic lenses last about three years, at which point their light sensitivity may lessen somewhat, though they will still function.

What are the benefits of sunglasses?

Sunglasses are ideal if you spend a lot of time outdoors, especially in activities like boating, fishing and skiing, where light is reflected off water or snow and glare can be intense. They are also very useful for those with light sensitivity, since they darken more than photochromic lenses do.

SEE RELATED: What are the best sunglasses for fishing?

Most sunglasses are crafted of light, durable polycarbonate, and naturally filter UVA and UVB light. Look for glasses that filter 100% of both forms of UV light; they may also be labeled as UV 400.

Sunglasses are usually dark enough to filter at least 70% of visible light and can filter as much as 85%.

Polarized lenses are ideal for sunglasses, says Henderson, because polarization increases visual acuity. “The crispness of vision you gain is remarkable,” she says, “and they block out glare.”

Options in tints and frame styles

Darker tints are great for outdoor athletes, as well as individuals who need to reduce the amount of glare and light reflecting off water or snow. They also help protect the eyes from excess UV light: fresh snow can reflect as much as 94 percent of UV light, giving you a second exposure.

Another benefit of sunglasses is that frames can be designed to curve or wrap around the face, eliminating UV light scatter that can enter through the sides of smaller frames and lenses. Wraparound glasses are recommended by the Environmental Working Group for those who want maximum protection for their eyes.

Sunglasses or photochromic lenses? You decide

Ophthalmologist Devin Harrison, of Richland, Washington, keeps several pairs of sunglasses handy — including a spare pair just for his car. He likes a darker lens when driving, especially on sunny days.

Whatever your lifestyle, the science of lenses has advanced so far that you can easily customize your glasses to offer the utmost in visual acuity, comfort and protection for your eyes both indoors and outdoors.

“The technology for photochromic lenses and for sunglasses has improved a lot over the years,” says Harrison, “and I imagine they are just going to get better.”

How quickly do photochromic lenses transition?

How photochromic lenses can help you as a cyclist

5 things to know about photochromic lenses