What is age-related macular degeneration?

The health of the macula determines our ability to read, recognize faces, drive, watch television, use a computer, and perform any other visual task that requires us to see fine detail. 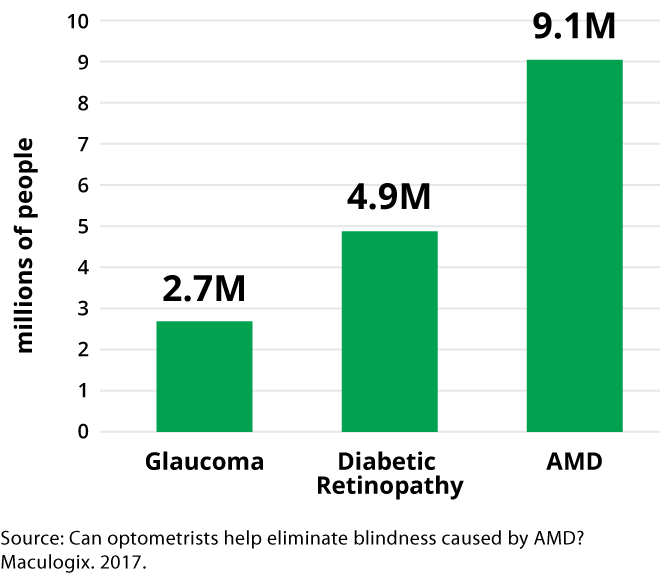 Macular degeneration is the leading cause of vision loss among older Americans, and due to the aging of the U.S. population, the number of people affected by AMD is expected to increase significantly in the years ahead.

According to a recent study by researchers at the University of Wisconsin School of Medicine and Public Health and the U.S. Centers for Disease Control and Prevention (CDC), approximately 6.5 percent of Americans age 40 and older have some degree of macular degeneration. Other research suggests there were 9.1 million cases of early AMD in the U.S. in 2010 and this number is expected to increase to 17.8 million by the year 2050.

AMD is most common among the older white population, affecting more than 14 percent of white Americans age 80 and older. Among Americans age 50 and older, advanced macular degeneration affects 2.1 percent of this group overall, with whites being affected more frequently than blacks, non-white Hispanics and other ethnic groups (2.5 percent vs. 0.9 percent).

Macular degeneration is diagnosed as either dry (non-neovascular) or wet (neovascular).

Neovascular
refers to growth of new blood vessels in an area, such as the macula, where they are not supposed to be. 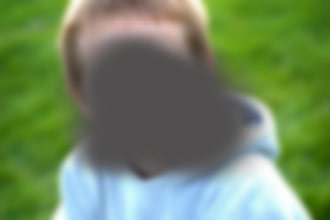 The dry form is more common than the wet form, with about 85 to 90 percent of AMD patients diagnosed with dry AMD. The wet form of the disease usually leads to more serious vision loss.

Dry macular degeneration (non-neovascular). Dry AMD is an early stage of the disease and may result from the aging and thinning of macular tissues, depositing of pigment in the macula or a combination of the two processes.

Dry macular degeneration is diagnosed when yellowish spots known as

drusen
begin to accumulate in and around the macula. It is believed these spots are deposits or debris from deteriorating tissue.

Gradual central vision loss may occur with dry macular degeneration but usually is not nearly as severe as wet AMD symptoms. However, dry AMD through a period of years slowly can progress to late-stage geographic atrophy (GA) — gradual degradation of retinal cells that also can cause severe vision loss.

FDA
-approved treatments are available for dry macular degeneration, although a few now are in clinical trials.

antioxidant
vitamins and multivitamins that also contain lutein and zeaxanthin can reduce the risk of dry AMD progressing to sight-threatening wet AMD.

But neither the AREDS nor the AREDS2 study demonstrated any preventive benefit of nutritional supplements against the development of dry AMD in healthy eyes.

Wet macular degeneration (neovascular). In about 10 percent of cases, dry AMD progresses to the more advanced and damaging form of the eye disease. With wet macular degeneration, new blood vessels grow beneath the retina and leak blood and fluid. This leakage causes permanent damage to light-sensitive retinal cells, which die off and create blind spots in central vision.

• Occult. New blood vessel growth beneath the retina is not as pronounced, and leakage is less evident in the occult CNV form of wet macular degeneration, which typically produces less severe vision loss.

Age-related macular degeneration usually produces a slow, painless loss of vision. In rare cases, however, vision loss can be sudden. Early signs of vision loss from AMD include shadowy areas in your central vision or unusually fuzzy or distorted vision. 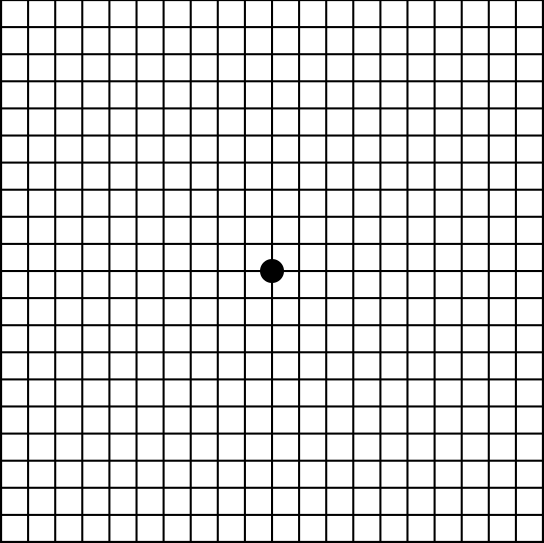 Eye care practitioners
often detect early signs of macular degeneration before symptoms occur. Usually this is accomplished through a retinal exam. When macular degeneration is suspected, a brief test using an Amsler grid that measures your central vision may be performed.

If your eye doctor detects some defect in your central vision, such as distortion or blurriness, he or she may order a

Though macular degeneration is associated with aging, research suggests there also is a genetic component to the disease. Duke University and other researchers have noted a strong association between development of AMD and presence of a variant of a gene known as complement factor H (CFH). This gene deficiency is associated with almost half of all potentially blinding cases of macular degeneration.

Columbia University Medical Center and other investigators found that variants of another gene, complement factor B, may be involved in development of AMD.

Who gets age-related macular degeneration?

Besides affecting older populations, AMD occurs in whites and females in particular. The disease also can result as a side effect of some drugs, and it seems to run in families.

Some researchers believe that over-exposure to sunlight also may be a contributing factor in development of macular degeneration, but this theory has not been proven conclusively. High levels of dietary fat also may be a risk factor for developing AMD. 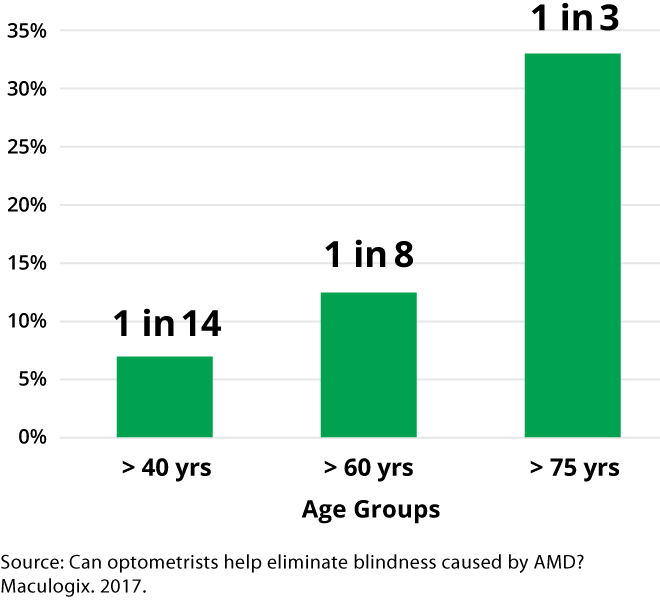 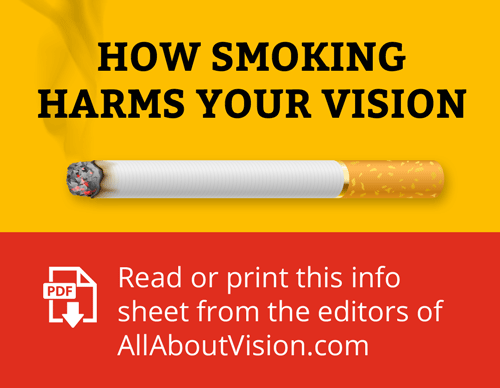 The American Academy of Ophthalmology notes that findings regarding AMD and risk factors have been contradictory, depending on the study. The only risk factors consistently found in studies to be associated with the eye disease are aging and smoking.

There is as yet no outright cure for age-related macular degeneration, but some treatments may delay its progression or even improve vision.

Treatments for macular degeneration depend on whether the disease is in its early-stage, dry form or in the more advanced, wet form that can lead to serious vision loss. No FDA-approved treatments exist yet for dry macular degeneration, although nutritional intervention may help prevent its progression to the wet form.

For wet AMD, treatments aimed at stopping abnormal blood vessel growth include FDA-approved drugs called Lucentis, Eylea, Macugen and Visudyne used with Photodynamic Therapy or PDT. Lucentis has been shown to improve vision in a significant number of people with macular degeneration. [For more details, read our article about macular degeneration treatments.]

Many organizations and independent researchers are conducting studies to determine if dietary modifications can reduce a person's risk of macular degeneration and vision loss associated with the condition. And some of these studies are revealing positive associations between good nutrition and reduced risk of AMD.

For example, some studies have suggested a diet that includes plenty of salmon and other coldwater fish, which contain high amounts of omega-3 fatty acids, may help prevent AMD or reduce the risk of its progression.

Visit and bookmark our Eye Nutrition News page for the latest developments in nutritional research that may prevent or limit vision problems from AMD, cataracts and other eye conditions.

Although much progress has been made recently in macular degeneration treatment research, complete recovery of vision lost to AMD is unlikely.

Your eye doctor may ask you to check your vision regularly with the Amsler grid described above.

*The epidemiology of age-related macular degeneration. Archives of Ophthalmology, April 2004.

Coronavirus and your eyes: Should you switch from contacts to glasses?

Stuck at home? Do's and don'ts to look your best