Drusen in the eye 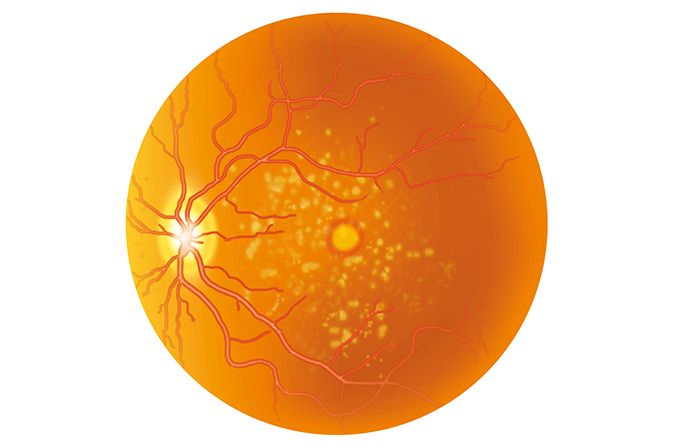 Drusen are yellow deposits of lipids and protein that develop under the retina of the eye. Some drusen occur as a normal aging change and are harmless. But sometimes, they can be a sign of age-related macular degeneration (AMD).

When drusen occur in the macula (the most sensitive, central region of the retina), they are called macular drusen.

The singular form of drusen is druse, which is derived from the German word for potato stone or geode (a rock containing a cavity lined with crystals or other mineral matter).

There are two main types of drusen in the retina of the eye: hard drusen and soft drusen.

Although both types of retinal drusen bodies should be monitored, hard drusen usually don’t cause vision problems. Soft drusen, on the other hand, are more likely to be associated with AMD and vision loss.

Many people who have retinal drusen do not experience symptoms. Oftentimes, people don’t even know that they have drusen until they are detected by an ophthalmologist or optometrist during a comprehensive eye exam.

Signs of drusen may not be present outside of an eye exam, but if your eye doctor finds soft drusen under the retina, they will likely run additional tests and ask you about any possible symptoms that could indicate AMD.

These symptoms may include the following:

Do drusen cause macular degeneration?

Age-related macular degeneration (AMD) is not directly caused by drusen. However, the presence of drusen — particularly soft drusen — can be an early indication of AMD.

“Age-related” is a part of the term because macular drusen associated with the condition typically affect adults 60 years and older.

Drusen can be associated with AMD, but they are not always a risk factor of the condition. Some of the risk factors for AMD are:

Do drusen cause vision loss?

Hard drusen do not often lead to more eye problems, but they can increase the risk of soft drusen — the type of drusen which can be a risk factor for additional vision conditions.

There is no treatment for hard or soft drusen. However, some steps may be taken to prevent additional drusen from forming and to slow the progression of AMD, which can be associated with soft drusen.

Can drusen be treated with laser treatment?

Can vitamins be taken to treat drusen?

According to the Age-Related Eye Disease Study 2 (AREDS2), certain nutritional supplements will not erase drusen, but they may help reduce the risk of advanced AMD.

The multivitamin formula used in the AREDS2 study included:

Though these supplements may help with preventing AMD, they cannot cure the condition.

Can drusen go away on their own?

A 2018 review in Investigative Ophthalmology & Visual Science found that, over a period of 5 to 7 years, about 20% to 34% of soft drusen disappeared on their own. Scientists think that this may be because once soft drusen become larger, the retinal cells surrounding them sometimes die or migrate. In some cases, a retinal detachment may lead  to the disappearance of soft drusen.

If you believe you are at risk for developing AMD, talk with your eye doctor about preventive measures — especially if drusen are found during a comprehensive eye exam.

According to the Centers for Disease Control and Prevention, AMD is the leading cause of permanent vision impairment for adults 65 and over, when it comes to reading close-up or fine print. This makes early intervention of the disease critical.

Regular eye exams are the best way to prevent any eye condition from developing (or worsening). Because the symptoms of drusen are not always obvious, eye exams are even more important, as they allow your eye doctor to detect and monitor them appropriately.