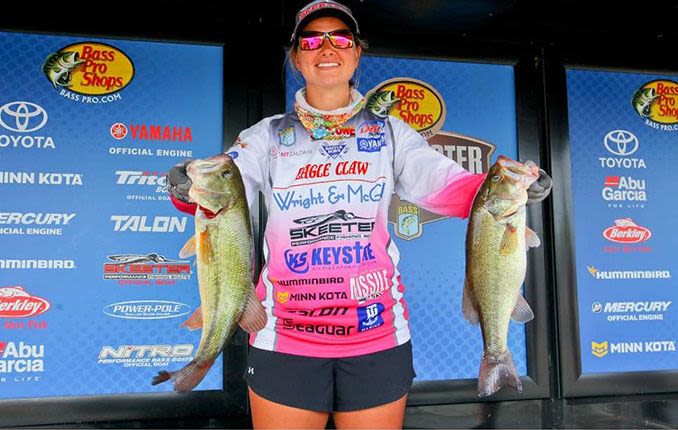 As any angler knows, when you’re trying to spot a fish with the sun in your eyes and glaring off the water, a good pair of sunglasses can make or break you. Nobody knows this better than someone who fishes for a living, under the pressure of competition.

“I can’t function without sunglasses, especially on the water,” says Trait Zaldain, who’s been fishing competitively for the last decade, along with her husband Chris Zaldain. Both are pros on the Bassmaster tournament circuit, the ultimate competition for anglers.

Chris, a Bassmaster Elite Series pro, has fished 93 tournaments, placing first twice and second three times, winning more than $700,000 so far. He finished second in the Angler of the Year competition at the start of October.

His wife, Trait, an Opens pro, has competed in 48 tournaments and is working hard to become one of the first women to compete at the elite level.

Bass fishing has evolved into a multibillion-dollar industry, and black bass has become the most sought-after game fish in the U.S. All manner of gear has been developed – from sunglasses to rods, reels, even boats – to meet the needs of anglers trying to land those big, feisty freshwater fish.

Big-game fishing in the ocean has much in common with freshwater fishing but comes with its own challenges, leading to another variation on sports sunglasses.

Trait keeps 10 pairs of sunglasses in a box in her vehicle when she’s on the tournament circuit, and two or three pairs on the boat with her at all times. Chris keeps backups on hand as well.

Chris wears Tech One XL sport sunglasses over contact lenses. His are made by Electric, a company based in his home state of California, with matte black frames and bronze polarized plastic lenses.

Chris’s fishing sunglasses are understated compared to his wife’s – Eagle Claw sunglasses with lenses that glow fuschia-pink from a mirror surface, a style she helped design for Walmart.

You can find Chris and Trait grinning behind their shades, holding up impressive trophy fish, on Instagram for tens of thousands of followers. What they’re both looking through are amber lenses designed to give them a competitive edge.

SEE RELATED: What are the best fishing sunglasses? 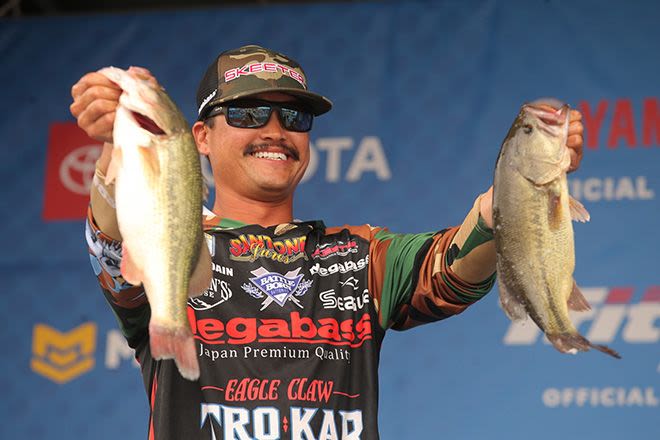 When it comes to eye protection for fishing, the challenge begins on that first early morning boat ride.

“When you’re driving down a lake at 75 miles an hour, if you don’t have something over your eyes, you’re going to tear up and won’t be able to see where you’re going,” Trait says. “Especially early in the morning, when that sun’s coming up, you’ll be blinded completely.”

First requirement of sunglasses for fishing is a snug, wrap-around style that will keep light out, even in your peripheral vision.

This is why you see anglers with a buff pulled up around their sunglasses and a cap pulled down on top of it. They’re trying to keep out as much light as possible so they can see what’s going on in the water.

You also need to protect your eyes from wind and rain, especially on a moving boat.

“Water only becomes a factor when it’s raining and I’m running down the lake or occasionally when the boat sends up spray in rough water,” Trait says. “When I’m standing on deck, I don’t have boat spray to deal with.”

It’s fairly easy for men, who make up the bulk of the world’s anglers, to find snug-fitting sport sunglasses. Most frames designed for fishing are built for men, which is why Trait wanted to offer an affordable option for female anglers who want the same snug fit.

Like men’s fishing sunglasses, hers wrap around to block wind and water but were designed for a smaller head. They also turn up slightly at the temples.

“They have more of a feminine appearance,” she says, “designed to flatter a woman’s facial structure, highlight the cheekbones.”

Oakley offers a custom fit for women’s sports sunglasses with their Reverie frames. Whether you’re male or female, you can find your eyeglasses size inside the right arm of your favorite frames. (Eye size and bridge size are often side by side, often separated by a box icon. Temple size is off to the right.)

Costa’s fishing sunglasses come in a variety of frame styles with attractively angled temples. Frames come in multiple colors with an option of polarized lenses or plastic lenses including green, gray and “copper silver” mirror.

“Let’s say I set the hook, miss the fish, and the bait comes up and hits me in the lens,” Trait says. “If that lens shatters, glass gets in your eyeball. And it happens frequently that bait goes flying. Maybe a couple times a year, you hear about someone breaking a lens that way.”

One problem with plastic lenses is they scratch more easily than glass, and scratches can get in the way of your vision. Drop your sunglasses and you can end up with multiple scratches.

“As long as your lens isn’t heavily scratched, I think most people just keep pushing forward and fishing,” she says. But the possibility of that happening is part of why she, and most competitive anglers, keep spares handy.

SEE RELATED: Guide to choosing the best sunglasses for your active lifestyle

Best lenses for fishing are polarized bronze or yellow, Trait says, depending on the time of day. Both emphasize the clarity in water. “They allow you to see fish on the bed or to see structure, the bottom composition, when you’re in the shallow,” she says.

Amber or bronze work best in medium to bright light; yellow lenses brighten things up in low light. “Costa makes all sorts of shades for anglers but generally amber and yellow are the only two you need,” Trait says.

New blue and green mirror lenses from Costa are all the rage right now among anglers, especially their Fantail and Tuna Alley wrap styles. Anglers who fish the open seas have slightly different challenges to deal with – the glare from a deeper and darker expanse of water, for one thing, and potential damage from saltwater.

Whatever sunglasses you choose for your own fishing expeditions, make sure you end up with a pair that maximizes your best advantage. “You want your eyes protected,” Trait says. “They’re a key component to fishing.”

READY TO SHOP FOR SUNGLASSES? Find an optical store near you.

Men’s sunglasses: Which are best for your face shape?

Which is better glass vs. plastic sunglass lenses?

Which is better: polarized or gradient sunglasses?