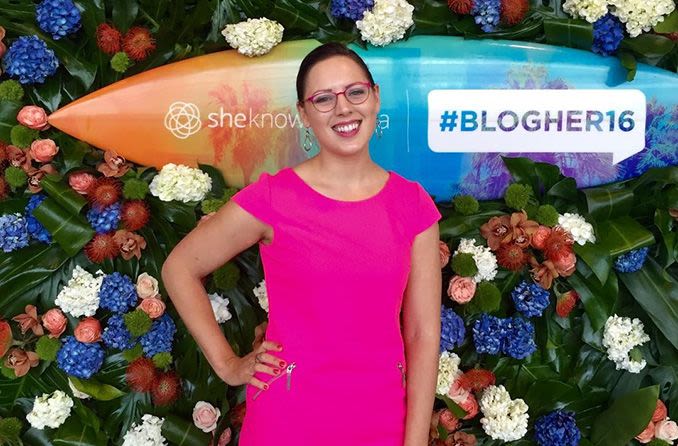 Stephanie Thoma is not afraid to stand out in a crowd, as is evident in her choice of distinctive pink (and other color) eyeglass frames. Which makes sense, given her occupation.

Thoma is a San Francisco-based networking strategy coach who specializes in working with introverts, helping them communicate with confidence in crowds of any size.

While many people might shudder at the thought of having to introduce themselves to strangers, Thoma has attended and hosted more than 500 events, where comfortable chit-chatting is essential.

Feeling comfortable in her own skin – and her eyeglasses – is a crucial element.

“When I was in the market for a new pair of glasses, I came across a pink pair that spoke to me,” Thoma says. “I rationalized that they wouldn't go with anything, and continued my search for a more reasonable black or silver pair, but they remained on my mind.

“Eventually, I took the plunge, ordered, and wore them with pride,” she says. “I realized that my bold choice became a conversation starter, and I was known to some people at events as the ‘woman in pink glasses.’"

Dressed in pink from birth

Thoma, who has a twin brother, has been comfortable in pink almost from birth.

“My parents dressed me in pink and him in blue from the start,” she says. “After that I was always wearing it, and it became my color. I identified with it. Pink is feminine, warm and fun.

“When I was in college, I did try to dress in neutrals, but it didn’t last,” she says. “So, I opened up to pink again and embraced its femininity.”

Thoma’s glasses story begins at age 15. She was in math class, sitting toward the back of the room, when she noticed that the numbers on the chalkboard were fuzzy. She wondered why no one else said anything.

Thinking it might be a glare from the lights, Thoma stayed after class to alert the teacher. “I said, ‘I can't read what's on the board. Would you be open to writing larger?’ and my teacher looked at me with wide eyes and asked if I had my vision checked recently.”

That question prompted a visit to the ophthalmologist, where Thoma discovered her eyesight needed assistance.

“My mom was with me and she picked out my first frames,” Thoma says. The selection was limited, so the pair she walked out with were hardly the stand-out specs she wears today.

“Oh no, they were minimalist silver frames, with wires so thin you could hardly notice them,” Thoma says.“ The idea was that they would go with everything. I had those glasses until my prescription changed a few years later, but I only wore them when I had to.” 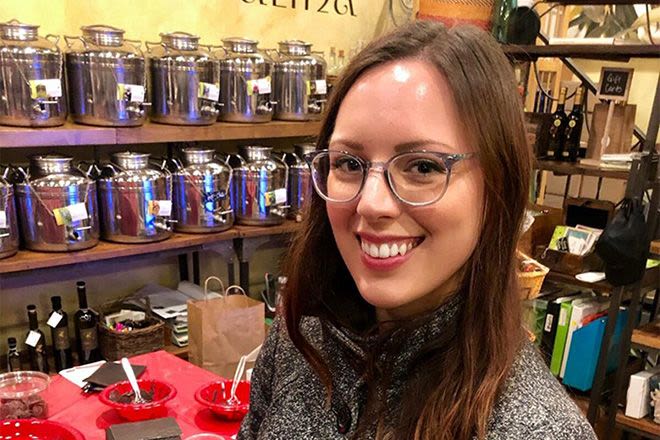 Eyeglasses as part of her wardrobe

As an adult, Thoma became a firm advocate for being authentic, not just in life but in fashion.

“I don’t choose a loud item of clothing or eyeglasses as a statement piece, but for genuine self-expression,” Thoma says. “I’ve been told I shape-shift. I can pull off a variety of looks and I really love trying on different styles.

“Color is a staple. I integrate gem tones, like royal blue, emerald and deep purple,” she says. “I’ll do a monochromatic look, all in the same shade, or wear all black with brights that go with my lipstick and glasses. I don't try too hard to match things."

As for the famous pink frames, they recently gave way to other non-traditional hues.

“The ones I have now are a beautiful translucent blue,” Thoma says. “I also have a frosted white pair, which are transitional so I can wear them in the sun. But I have black frames too, for when I feel more serious.

“What I wear on any given day depends on what I feel like at the time,” she adds.

Eyeglasses as a conversation starter

Unusual eyewear is a way to bond with others. “People with unique frames will come over and talk to me,” Thoma says. “There’s instant camaraderie. It’s a way to build relationships, since wearing brightly colored glasses can be a natural conversation starter, and a way to be remembered.”

Because meeting and talking to new people can be awkward, you may not know how to break the ice. Inquiring about a person’s frames is an entry point. It’s neither controversial nor boring.

“They’re usually cat eye,” she says. “I grew up loving the movie ‘Grease,’" and I am really attracted to the retro look. It’s just a cool shape, and again, feminine.” 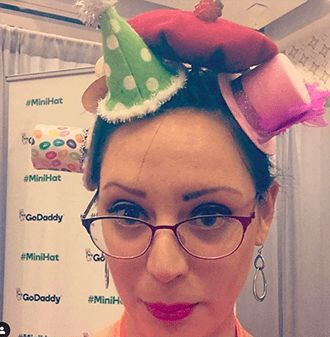 Expressing yourself through eyeglasses

“All glasses are an opportunity to express yourself, so I think you should be open to looking at various options without judgment,” Thoma says. “Don't be afraid to stand out with unique frames!

“Focus on how you feel when you wear them,” she adds. “Are you a bolder version of yourself with them on? It’s a good question to ask when you’re shopping.”

Thoma finds her gems (in looks and savings) in the clearance bin at online retailers.

“I do most of my shopping for glasses online, and go right to the sale section,” she says. “The quirkier styles are usually there, so it’s a win-win for me.”