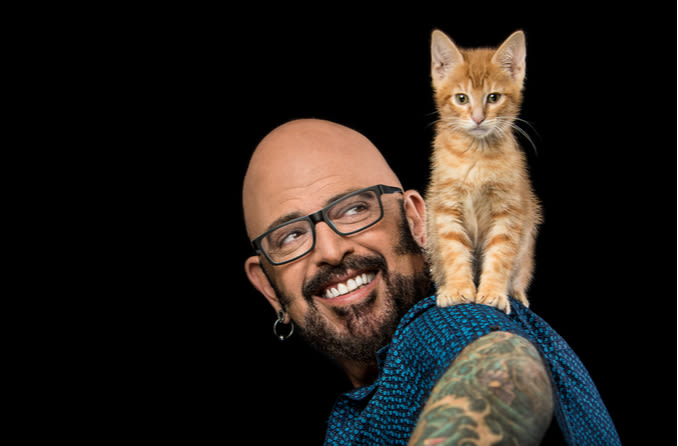 Middle schoolers tend to live in a perpetual state of cringe, but certain triggers magnify their embarrassment. For Jackson Galaxy, host of the hit TV show “My Cat From Hell,” it was needing glasses.

After experiencing headaches, his mother took him to the eye doctor and discovered the cause of his pain: He was nearsighted.

“In the eighth grade, everything that you do, or at least you think, is being so hyper-analyzed from a social perspective,” Galaxy says. “I was so traumatized after my appointment that my mom took me to the record store and bought me a record afterward because it was the only thing she could do to keep me from being absolutely mortified.”

Yet when he slipped on his first pair of specs, he could see clearly for the first time. It was a revelation: “For a second, it made me forget how mortified I was to need glasses.”

And so his life with frames and lenses began.

From a young age, Galaxy developed a “go big or go home” attitude. He recently found a photo of himself at age 7, wearing more necklaces than Mr. T. 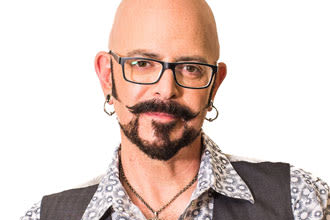 At 15, he pierced his ears and wore the biggest, gaudiest earrings he could find. He started experimenting with his eyewear, trying different shapes and styles, especially after he started working as a musician.

Galaxy soon realized he could get away with eyeglass styles a lot of guys couldn’t.

“In fact, a lot of the frames I would pick up were women’s glasses, but they just seemed to work on me,” he says. “I was the king of tints. I had purple, pink, blue. My wife says I’m a peacock, and who am I to argue?”

“I used to wear big, clunky, heavy glasses and I would even pick up frames off the street for $4 and throw lenses in them,” he says. “But, as I’ve gotten older, comfort has become more of a priority. I wish there were more fashion-forward frames that were also lightweight at the same time.”

Galaxy currently owns about eight pairs of glasses, including prescription sunglasses, and often chooses which he’ll wear based on his outfit.

“I’ve learned a lot about the potential of glasses from two people — Elton John and Paul Shaffer — both of whom never settled on one pair,” he says.

Mistakes, he’s made a few

Of course, not every style is a hit, including those his loved ones dubbed “the Kardashian sunglasses.” And not in a favorable way. 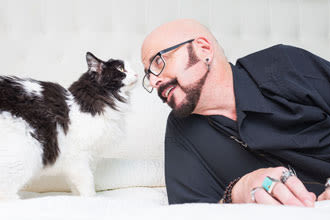 “They were just big, oversized Jackie Onassis sunglasses and I loved them,” Galaxy says. “The second I put them on, I said to myself, ‘This is me!’ But I quickly found out that I was the only one who thought that. In fact, my wife tried to hide them from me so I wouldn’t wear them anymore.”

Galaxy has toyed with more conventional looks, but they didn’t take. Nothing he does is “normal,” from his beard to his attire, so he stopped resisting.

“Everything I do, to a certain degree, is a statement,” Galaxy says. “I approach glasses in the same way I approach clothing or facial hair or anything else. If you can get away with it, you might as well go with it.”

“I’ve definitely had health problems over the years, such as being overweight and having addiction issues,” Galaxy says. “While they had lasting problems on my joints, it was never on my eyes.

“However, my prescription hasn’t worsened in the past 10 years or so, and that’s when I made a serious commitment to my health,” he adds. “I don’t have proof that getting healthy contributed to my eyesight staying as is, but there’s definitely a possibility!”

Most people eventually need reading glasses to cope with age-related presbyopia, but not Galaxy, who is now 53. He can’t read with his glasses on.

“I find myself taking them off and then forgetting I don’t have them on until I get in the car to drive!” he explains.

“My Cat From Hell” viewers not only comment on Galaxy’s glasses and ask where he finds them, they’ve noticed what he does with the frames.

When meeting unfamiliar felines, Galaxy doesn’t present his hands first because the animals may feel threatened. As part of his introduction technique, he conducts one of his trademark moves: He removes his specs and presents the earpiece of his glasses to the cat’s nose.

“I do this because my scent is heavily on those glasses, and that can build trust with the cat,” Galaxy says. “So my glasses have been a big part of the show.”

Reducing background noise is essential in production, so air conditioning needs to be turned off in homes and other filming locations during the summer. The resulting heat is problematic to say the least — especially for eyeglass wearers.

“One of the worst feelings in the world, as I’m sure all people with glasses can relate to, is as you sweat your glasses keep sliding off your face!” Galaxy says. “It’s such a frustrating feeling having to continuously push them up, so I would take them off halfway through a taping.

"There’s always someone yelling at me, especially in post-production, about how I have glasses on in one scene and then they’re off in another, causing continuity issues,” he adds “My editors get so frustrated and beg me not to take my glasses off!”

Then there are tears. As an avowed animal lover, Galaxy gets emotional when he has to deal with a cat in distress. When he cries, his glasses fog up, and his long lashes only exacerbate the problem.

No matter how high the frames sit on his nose, his lashes rub up against the lenses, creating a car wash effect — which is definitely not good on camera.

Back to the wild

When shooting ”My Cat From Hell,” Galaxy had to set aside his more extravagant, colorful glasses because they didn’t film well. 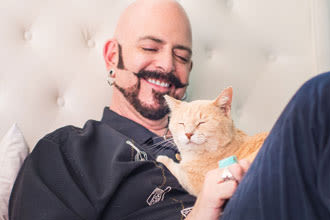 “I’m now starting to find my way back to my original taste,” says Galaxy, whose latest endeavor is Jackson Galaxy’s Cat Camp, the premier cat advocacy event in the country.

“I haven’t been able to wear too many colors and tints on the show but I am getting back into it. It’s my favorite look,“ Galaxy says. “I’m currently working on a pink gradient, so look for me to debut that soon!”

LOOKING FOR YOUR OWN ADVENTUROUS GLASSES? Find an optical store near you.