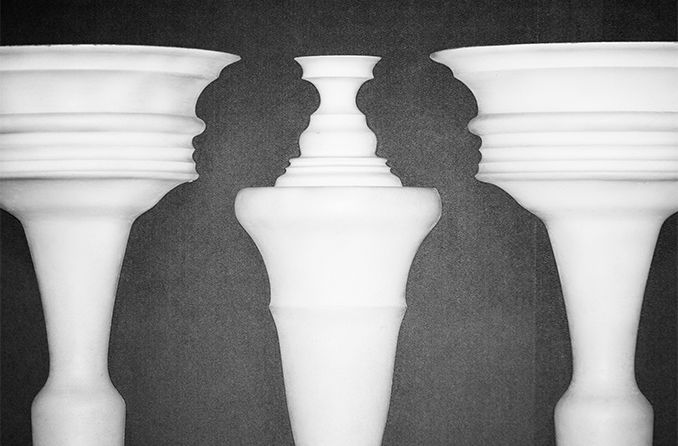 Whatever the reason, optical illusions seem to be telling us something is there when it really isn’t. What’s going on?

Well, our vision system is not like a camera or a computer that produces images the same way every time. It’s a collection of living tissue that’s always changing in response to our environment.

Ideally, our eyeballs capture visual information and send it via the optic nerves to the brain. There, the brain figures out what it all means as quickly as possible. Eyesight is the result.

But sometimes the brain gets more visual information than it can handle, so it makes a guess. An incorrect guess can create an optical illusion.

Optical illusions might mean all sorts of things — from engaging mind games to symptoms of an underlying disease. Whatever the cause, optical illusions are a fascinating facet of human perception.

Let’s take a look at why these visual goofs capture our imagination, and when they might be a cause for concern.

SEE RELATED: Optical illusions: What are they? (video)

Everyday optical illusions you may not even notice

Your brain does a lot of guesswork that you might not realize is an optical illusion, such as:

Some of the coolest optical illusions are anything but natural. They happen because people set out to trip up our visual system. We’ll talk about this in a minute, but first we’ll look at the basic causes of optical illusions.

Why does the vision system produce optical illusions?

Scientists are not entirely certain why we experience optical illusions, but these are some of their theories:

Optical illusion in drawings: Illustrations faking us out

Simple patterns of lines, dots and shades can trick the visual system and confuse our brain’s interpretation of what we think we’re seeing.

For instance, in 1995, a researcher at Massachusetts Institute of Technology created the now-famous Checkershadow Illusion to show how the brain gets visual cues wrong sometimes.

There are subtle differences in how the brain perceives shades, shapes, edges and lighting contrast. This doesn’t mean the brain is malfunctioning. Instead, the brain simply tries to make the most useful conclusion from conflicting information.

Another popular example is the scintillating grid. The structure of this illustration causes the eyes to see black dots in various intersections of the horizontal and vertical lines. It’s not that the dots aren’t there. It’s just that they appear black when they are really white. One theory is that this grid activates two kinds of nerves in the retina — and the flashing-dots effect happens because of differences in how these nerves fire.

Pictures can depict two things, depending on how you look at them. In Young Woman or Old Woman, you will see one or the other, depending on your brain's first impression. An effect here called a “gestalt switch” happens when you go from seeing one image to seeing the other. Once you see the second image, it’s difficult to go back to seeing the original one.

And in this image of strawberries, you'll see an example of the brain plugging in missing information. In this picture of a batch of strawberries, a Japanese researcher removed all the red pixels from the image. But the strawberries still look red. How can this be? In a conventional color photo, on-screen pixels are either red, blue or green. But if the red pixels are gone, as in this image, the brain can combine our expectation of red strawberries with information from the blue and green pixels. The result: We still see red.

Optical illusion in art: Creators getting our brains to misfire

The surrealist artist Salvador Dali, for instance, loved playing pranks on his viewers. One famous picture revealed a bust of the philosopher Voltaire in the middle of an image of a slave market. Another one transforms into a portrait of Abraham Lincoln at a distance of 20 meters.

One of the most perplexing of these optical illusion artists was M.C. Escher, who famously crafted visual paradoxes that were impossible to resolve. His stairways up might turn into stairways down, creating a mind-mending experience.

When illusions are symptoms of illness

In a healthy visual system, optical illusions are intriguing examples of the mind’s many complexities. But sometimes, the brain sees things that aren’t there. These aren’t exactly optical illusions. They’re more likely to be hallucinations.

Schizophrenia, medications and drug abuse all may produce hallucinations. Diseases of the optic nerve and retina may also cause distorted vision.

If you’re hallucinating or experiencing unexpected optical distortions or unexplained illusions, you should contact a doctor as soon as possible.

SEE RELATED: Eye anatomy: A closer look at the parts of the eye

How to fix the red eye effect in photos