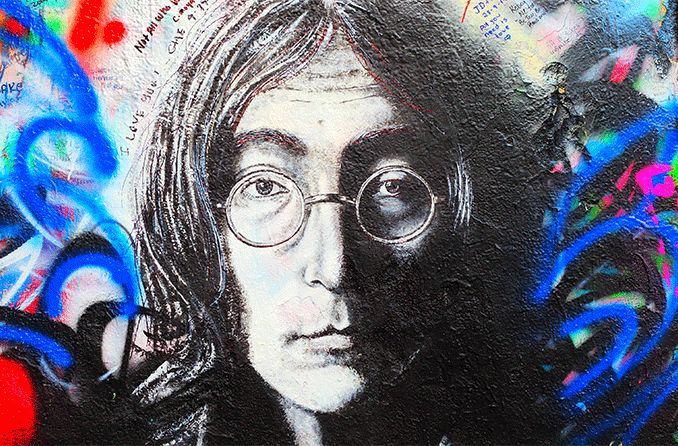 If you’re thinking of new glasses or sunglasses, why not draw your style inspiration from the late rock star, John Lennon?

During the 1960s and 1970s, Lennon was one of the most famous people in the world, both as a member of the Beatles and as a solo artist. He was also one of the most influential. In the later years of the Beatles, he began wearing glasses with circular frames and instantly popularized the style. In fact, they’re so associated with his image they’re now commonly referred to as “Lennon glasses.”

While a pair of glasses that actually adorned Lennon’s face have been auctioned for almost $200,000, you can find the same style of specs at far more reasonable prices.

Because of their versatility, round glasses are a fashionable unisex option that suits most face shapes, and are available in a range of colors, materials and lens options.

So if you’re thinking of sporting a retro, stylish look that harkens back to the 1960s and 1970s, look no further than circular frames.

For a while, John Lennon was even seen without specs, preferring instead to use contact lenses to correct his nearsightedness. That all changed in 1966, when Lennon wore circular glasses in the movie, “How I Won the War.”

Since he was such a prominent anti-war “hippie,” Lennon’s style of clothing and round glasses soon became synonymous with hippie fashion, embraced by young people the world over.

Lennon stuck with circular specs for the rest of his life. And, although he rotated through different frames and lens tints, this accessory was cemented as an important part of his image, well past his death in 1980.

In fact, these glasses are such a recognizable part of Lennon’s enduring image that a few super fans have gotten tattoos of the frames to demonstrate their unending love for the artist and his singular style.

SEE RELATED: The history and allure of vintage sunglasses

What kind of glasses did John Lennon wear?

Traditional Lennon glasses are wire-rimmed, with round or slightly off-round frames and temples that wrap around the ears to keep them in place. They are sometimes called tea shades, Windsor glasses or round granny glasses.

While the style has been around since the 13th century, John Lennon popularized round glasses in the 1960s and 1970s. They’ve been worn by other well-known figures, including Gandhi, Groucho Marx and the modern-day fictional character, “Harry Potter,” but the former Beatle was the most influential, inspiring many young people to adopt this style of specs.

When Lennon wore amber-tinted lenses in the video for his song “Imagine” — one of the most-loved songs of all time — it only added to the allure.

These days, you can find Lennon glasses in a variety of lens and frame colors (and materials), so you can emulate his look while putting your own unique spin on them.

Lennon Lennon glasses are quite versatile. You can find them in a range of colors and materials, with prescription or non-prescription lenses and more — you can even opt for round sunglasses with UV protection for whenever you’re outdoors.

If you’re thinking of purchasing a pair, first look for round sunglasses that will provide protection from the sun’s damaging ultraviolet (UV) rays at any time of the year, even during a cloudy winter.

Exposure to UV light over time can cause issues later in life, including cataracts and macular degeneration, so make sure your rounded shades include quality lenses with 100% UV protection.

Luckily, you don’t have to sacrifice style to keep your eyes healthy, because many sunglasses with round frames will give you the protection you need. You may also consider specific lens types, including:

SEE RELATED: Checklist: What makes a good pair of sunglasses?

Where can I find John Lennon style glasses?

Lennon didn’t discriminate when it came to the brands he wore, as long as he could find glasses in the round frame shape he favored.

Many brands today sell Lennon-inspired glasses, with some claiming to match the exact style that he wore. With a little research, you should be able to find Lennon glasses (and sunglasses) collections from a variety of retailers and at various price points.

For style inspiration, why not start with one of the following?

John Lennon was one of the most famous musicians to ever live, and his premature death only served to further cement his status as a musical legend.

He was among the many artists who used style to reflect their persona — and for Lennon, that included his choice of round glasses — and even today, fans seek to mimic his distinctive appearance.

Whether you consider yourself a huge fan, or simply love John Lennon’s fashion choices, with a little research, you’re sure to find a pair of round glasses to suit your personality and budget, while paying homage to this classic style.