Is there a disease that causes purple eyes? 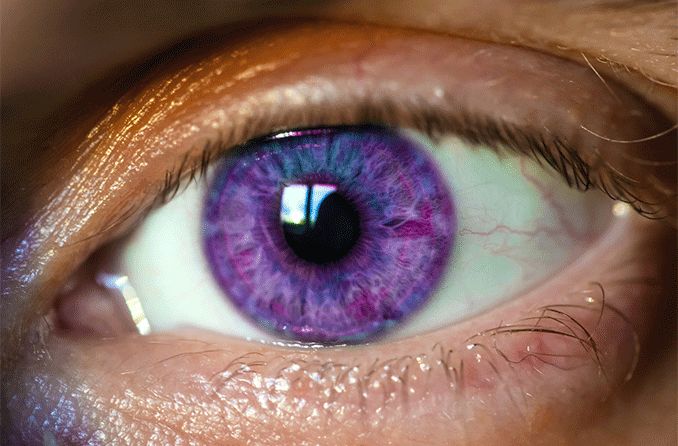 In the early 2000s, a purple eye disease called Alexandria’s genesis was introduced to the world. It was said to cause violet eyes and perfect vision in those who had it. And while it may be fun to imagine, such a disease does not exist. So how did it come to be, and what can cause violet eyes?

What is Alexandria’s genesis?

Alexandria’s genesis or “Alexandria genesis syndrome” is a popular legend of a superhuman disease that emerged on the internet in the early 2000s, after a fanfiction writer created it for a story they were writing.

The “syndrome” is said to be a genetic mutation that causes the eyes to turn from blue to purple after six months of age. During puberty, the shade of purple deepens even more. Some other symptoms of the alleged disease include the following:

Many believe that some celebrities have purple eyes — particularly Elizabeth Taylor — but the true shade of her eyes was fairly subjective. The color often seemed to depend on the lighting around her, as well as the color of Taylor’s scarves, clothing and accessories, and how they played on the color of her eyes.

Although it’s a fascinating idea, “purple eye syndrome” does not exist in the real world. It was invented by a fanfiction writer named Cameron Aubernon, who has confirmed that it’s made up. However, some of the origin story was inspired by historical facts, according to the author.

SEE RELATED: What is the rarest eye color?

The origin of Alexandria’s genesis

How did Alexandria’s genesis come to be? In 1998, a creative writer (Cameron Aubernon) presented the disease in a fictional story based on MTV’s popular animated series “Daria.”

Aubernon said that two characters in the story had a genetic mutation called Alexandria’s genesis — a purple eye disease that caused their eyes to change from blue to purple by their first birthday. It also gave them perfect fair skin and beautiful dark brown hair.

According to the original myth, in the year 1329, an English couple noticed that their daughter’s eyes were changing from the blue tint she was born with to a shade of violet. Her name was Alexandria Augustine.

The parents asked their priest to look at their daughter because they believed a witch had cursed her. He assured them that Alexandria was in good health and that she had a special disease that was only known to affect a certain race of people in ancient Egypt.

The myth goes on to explain that this group of people from Egypt were actually “spirits” who appeared after a light flashed in the sky on a night when the moon was not visible. These “spirit people” were said to have superhuman qualities and physical features when they were around, but at some point, they disappeared and were never seen again.

In 2011, Aubernon discovered that Alexandria’s genesis was still being discussed on the internet and spoke out to let the public know that the condition was fictional (along with the story it came from). But despite Aubernon acknowledging that it’s fake, there are still people that claim to have the disease or know someone who does.

SEE RELATED: Is it true all babies are born with blue eyes?

Conditions that can alter eye colors

While there is no scientific proof of a disease where you get purple eyes, some eye conditions do exist that cause the eyes to vary in color. The following conditions can affect the color or appearance of the eyes:

Heterochromia is a term used to describe a rare condition in which a person has more than one eye color. In some cases, each eye is a different color, but there are also times where two different colors can occur in the same eye.

Like the myth of Alexandria’s genesis, heterochromia is believed in most cases to be caused by a genetic mutation.

Fuchs heterochromic iridocyclitis occurs when there is inflammation in the front of the eye. One of the parts that can be affected is the iris — the colored part of the eye that contains the pupil.

A particular symptom of Fuchs heterochromic iridocyclitis is pigmentation loss in the iris, which can alter the color of the eyes. The cause of the condition is unknown, but it can lead to serious eye problems — such as glaucoma and vision loss — if it is not treated.

SEE RELATED: What is iridocyclitis?

Horner's syndrome is a rare disorder that affects the eye and tissues on one side of the face. In most cases, the disorder develops after a stroke (due to a tumor or injury of the spinal cord) leaves nerve damage in the face.

The condition can affect the pigmentation of the iris, which can result in a change in the color of the eyes. It can also cause one pupil to be larger than the other (anisocoria), which can make the eyes look as though they are different colors.

Albinism is a condition that occurs when the body doesn’t produce enough melanin, a chemical compound that supplies color pigments to the eyes, skin and hair. When albinism is only found in the eyes, it’s called ocular albinism.

Many people who have albinism may appear to have violet or red eyes. Aside from eye color, the condition can cause several vision problems, including crossed eyes or “lazy eye” (strabismus), involuntary eye shifting (nystagmus), light sensitivity and below-normal visual acuity.

Violet eyes are rare, but...

You can get colored contact lenses if you want to live out your purple-eye fantasy. Even though there is no real purple eye disease, many brands of contacts offer lenses with beautiful shades of violet, both for vision correction and purely cosmetic reasons. Ask your eye care professional for guidance when choosing the best contact lenses for your eyes.

To keep your vision healthy, be sure to schedule a yearly comprehensive eye exam. And if you notice any unusual changes in your vision or eye health, including your eyes changing color, contact your eye doctor immediately.

READ NEXT: Old Wives’ Tales About Your Eyes: Is There Any Truth to Them?

Why are my eyes changing color? American Academy of Ophthalmology. January 2021.