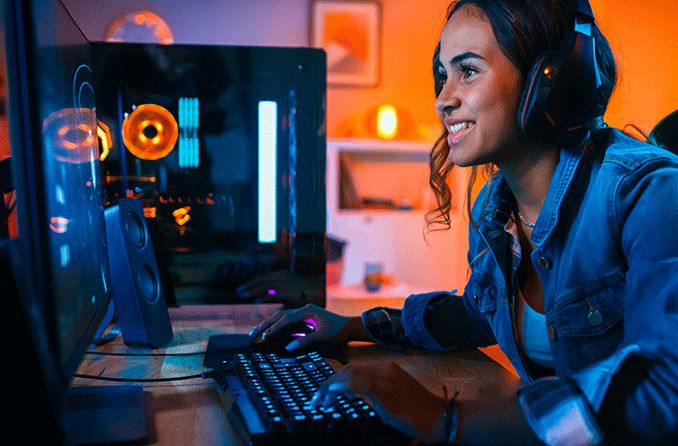 How do video games affect health and vision?

Video games are a great source of entertainment, socializing and even education for both children and adults. But they can also cause health problems on the inside and out. This can include anything from poor sleep to low self-esteem. Too much time in front of the screen can also harm vision.

Despite these unfavorable factors, video games can actually improve some aspects of health. For example, vision disorders such as amblyopia can be treated with special video games. Games that require team building and other multiplayer features can also improve social skills.

Gaming: Is it good or bad for your mental health? There are several studies that point in both directions. In either case, consider limiting your screen time so that you can live a balanced life.

Many experts believe that video games can have a negative effect on mental health. This includes symptoms like:

These unfavorable side effects can interrupt daily life. Poorly influenced decisions and emotional states can make life harder. Playing video games can also be habit-forming. So, like other activities, limiting your time with video games is recommended.

Additional measures may need to be taken if video games cause too many problems for one’s frame of mind. Never hesitate to talk to your doctor about your psychological symptoms and what could be contributing to them.

On the other hand, some research points out that video games can improve mental health in several aspects. A 2021 study completed by JMIR Serious Games showed that mental and social skills are positively affected by some video games.

Different game genres can heighten a gamer’s mental skill sets. In turn, this can improve moods, increase social skills and even help with emotional coping methods. For example, goal-oriented games increase motivation in life outside the screen. Multiplayer games improve social skills by having players work together virtually.

High scores and achieving higher levels in a game give players a sense of accomplishment. This can reflect positively on other life goals. And of course, the enjoyment and entertainment gamers feel as they play are positive feelings.

Some of the games and their corresponding benefits that were noted include the following:

Researchers found that some cognitive skill games can even improve dyslexia symptoms in some individuals.

Since video games can have both positive and negative effects on mental health, check in with yourself before and after playing. It’s important to recognize your moods and emotional states so that you can understand which games make them better or worse.

Video games may also affect your eye health. One of the most commonly reported disorders associated with video games and excessive screen time is a condition known as computer vision syndrome (CVS).

When the eyes focus on a brightly lit screen for too long, it can cause strain. This can then lead to symptoms such as dry eyes, blurred vision and headaches. But focusing on the screen for a long period of time isn’t the only risk factor. Screen glares, poor posture and improper lighting can all contribute to the discomfort.

If you have an uncorrected vision problem such as myopia (nearsightedness), it can make symptoms even worse. This is because the eyes have to stress even more in order to focus.

Fortunately, there is a way to combat these problems:

Studies show that the possibility is real for video games to benefit some conditions, such as amblyopia (lazy eye).

Amblyopia occurs when one eye does not reach visual acuity, even with the help of contacts or eyeglasses. In many cases, ophthalmologists correct lazy eye by patching the dominant eye in order to strengthen the weaker eye. (Other treatments may be needed for severe cases).

A 2016 study conducted by the Retina Foundation of the Southwest found that certain video games can aid in correcting amblyopia in children. Over a two week period, 28 children with amblyopia were placed in two different groups and received different treatments for their condition.

One group of children wore an eyepatch for two hours a day, for every day over this period (28 hours total). The other group engaged in a binocular iPad game while wearing special anaglyph (3D) eyeglasses for one hour a day during 10 days of the study (a total of 10 hours). Both the eyepatches and the anaglyph glasses that were used made the weaker eyes work harder in each individual.

The group of children who played the iPad game achieved a greater improvement in visual acuity than the group who used patching. What’s more — the group that played games achieved greater results in a shorter period of time.

Several studies highlight the damage video games can have on social skills and self-esteem. But it can go deeper than that for many gamers.

Some of the most obvious challenges of a video game include conquering villains, moving through difficult levels and beating the highest score. Each of these can cause both good and bad emotional reactions for players.

A sense of accomplishment and achievement usually occurs when someone wins a game or conquers a difficult level. But if they fail, it can cause a much worse emotional reaction.

Depending on how invested you are in a game, either outcome could affect your life away from the screen.

Games can give unrealistic body expectations

Video game characters can also impact a person’s body image. In one study, male participants were assigned characters for a game at random. Some played in the role of a highly muscular character while others played one with a more average build.

Those who played as the muscular characters had much more negative attitudes toward their own bodies when the game was over. The study concluded that unrealistically muscular video game characters can lower the self-esteem of gamers who feel they cannot achieve the same level of physique.

On the other hand, there is a possibility that self-esteem can be raised by playing video games — for a similar reason. Certain video games, such as World of Warcraft, allow the user to create a character or avatar of their own, rather than choosing from a group of pre-designed characters.

Researchers agree that the self-creation aspect gives gamers a higher sense of freedom to be whomever they want to be. And this can be quite positive for many.

It’s easier said than done for many people — but if possible, try not to take games and virtual life so seriously. Reminding yourself that it’s all in good fun can prevent harm to your self-esteem and mental health.

What about obesity? Although obesity has been thought to be linked to playing video games, studies have found that there is not a direct connection between the two.

How do video games affect sleep? Playing games too close to bedtime can increase brain activity and make you too excited or wound up to rest effectively. The bright lights on the screen of your computer or television can also make falling asleep difficult. But why does this matter?

First, you need to understand why sleep is so important. Both the quantity and quality of sleep have a large impact on daily life. Poor sleep can contribute to focusing problems, negative moods and a lack of productivity. A good night’s rest, on the other hand, allows you to be more alert and content in both physical and mental capacities.

Each phase of sleep is needed in order to feel refreshed and prepared for the next day. But there are many popular activities that can interrupt a good night’s rest, including video games and other types of screen time.

Research shows that playing video games before bed interferes most with the REM cycle of sleep. But it contributes to a decrease in overall sleep quality. Additionally, gaming for an hour a day or longer increases the chances of poor sleep by 30%, according to a 2014 study.

To improve sleep, consider limiting your gaming time to an hour or less a day. And try not to game too close to your bedtime.

Can video games ever help with sleep? It’s possible but not guaranteed. Studies have shown that video games can help relieve anxiety, which may help some clear their heads before bed. But be sure to take the negative effects on sleep into consideration.

Although video games are often played in a seated position, many parts of the body are used — and it can be painful. Factors such as poor posture, sitting in the same position for long periods of time and excessive use of the hands and wrists can all negatively affect physical health.

Many gamers sit in the same position, with the same posture, for significant periods of time while they play video games. This can cause a negative effect on the structure of the body. Back, joint, wrist, neck and arm or elbow pain are often reported by gamers.

Joints are designed to move, so when they are restricted, it can be painful and cause lasting effects.

Video games require heavy use of your hands and wrists, as the vast majority are played with a handheld controller or a computer keyboard. It’s been a popular belief that excessive typing, keyboard or mouse use can cause carpal tunnel syndrome. However, studies have not been able to prove this connection.

To reduce pain in the joints, muscles and other parts of the body, be sure to take plenty of breaks during your designated gaming time.

Have you ever noticed the health warnings that appear on a screen before your game begins? Often, these warnings include a warning for photosensitivity and epileptic seizures.

Flashing lights and rapid light patterns in video games can pose a risk for those who have epilepsy. This is due to a condition called photosensitive epilepsy, and about 3% of epileptic patients experience it.

If you are a gamer and have photosensitive epilepsy, there are certain steps you can take to prevent having a seizure. This includes:

Not every video game or individual trigger is guaranteed to cause a seizure, and some people may be more sensitive than others. Nevertheless, it’s important to be cautious and understand the risks.

Report any seizures you experience while playing a video game to your doctor. They may recommend that you stop playing video games for a certain period of time after the seizure occurs.

Many health problems can occur when you play video games for an extended or excessive amount of time. Like many activities, indulging video games and other digital activities should be done in moderation. At the very least, they should be done with protection such as computer glasses, proper lighting and a healthy mindset.

Despite the complications (dry eyes, poor sleep, joint pain and more), video games can improve some aspects of your life. This may include improving your social and cognitive skills with strategy and multiplayer games. Children with vision disorders such as amblyopia can also benefit from iPad games that work to train the eyes and improve visual acuity.

For an optimal balance between your health and your video game consumption, check in with yourself and take a step back when needed. And don’t forget to get your vision checked every year to ensure any focusing issues are corrected. Finally, self-monitor your physical and mental health both on and off the screen.

READ NEXT: Can VR headsets harm your eyes?

The association between video gaming and psychological functioning. Frontiers in Psychology. July 2019.

Why do we need sleep? Sleep Foundation. March 2022.

Pain and musculoskeletal pain syndromes related to computer and video game use in adolescents. European Journal of Pediatrics. June 2006.

Health Warning (US). PlayStation. Accessed May 2022.

Do gaming glasses really work? Yes, they do… but not for everyone.

What are the effects of too much screen time?

Advantages of a 24-hour digital detox for kids

How much screen time is okay for my child?