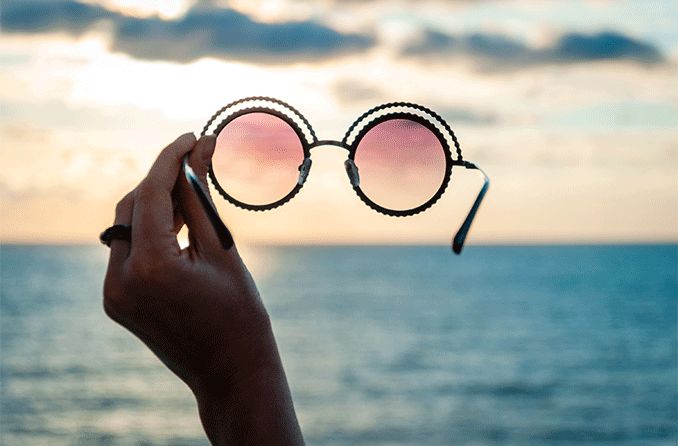 “To wear rose-colored glasses” is to see the world in a favorable light. It’s a well-known idiom that paints a pretty picture: We swap our regular lenses for a pair with a pink tint, and suddenly the world looks to be a friendlier place.

But where does this turn of phrase come from, and what can it tell us about vision science? Beyond the optimistic notion, eyewear with pink lenses allow you to actually see the world through rose-colored glasses — and enhance your vision at the same time.

By most accounts, the phrase “rose-colored glasses” became a part of figurative speech in the 1840s. The first known publication of the phrase is generally accepted to be from the novel “Tom Brown at Oxford,” written by Thomas Hughes and distributed in serial form in 1859. Even then, everyone agreed that to see through rose-colored glasses was to be optimistic, cheery and hopeful, but few agreed from where the phrase actually originated.

One history of rose-colored glasses harkens back to the days of hand-drawn maps and the cartographers who created them. It’s not difficult to imagine that, before washing machines, it was challenging to find a clean cloth soft enough to effectively and safely clean corrective lenses. And so, the story goes, mapmakers used rose petals to polish their glasses before settling in for their detailed work. Presumably, after many polishes, the color of the rose petals left a pink residue on the lenses to tint the map maker’s vision.

While this story might explain how map makers were looking at the world (or at least a flat representation of it) through rose-colored glasses, it falls short of explaining how this idiom took form in the broader context.

Another theory suggests that the phrase wasn’t referencing ocular lenses at all but was referencing drinking glasses. A recently emptied glass of red wine might still hold enough of the beverage to tint the view of someone looking through it and would understandably explain the association with a rosy, optimistic outlook on life.

A glass of wine from time to time will likely brighten a person’s perspective. Likewise, science has proven that a positive outlook can help us see our world more completely.

A 2009 study out of the University of Toronto and published in the Journal of Neuroscience showed that our moods could change how our visual cortex operates. Using functional Magnetic Resonance Imaging (fMRI) technology, researchers found that subjects with a positive mindset could take in more visual information. More negative moods limited perception.

The experiment began by showing subjects a collection of images that researchers designed to encourage either a bad mood or a good mood. Once they felt appropriately gloomy or cheery (depending on which test group they were assigned), the subjects were shown an image of a face in a given environment, such as the interior of a house.

The subjects were told to focus on the face and asked to determine the gender. The researchers found that the individuals who were primed with upsetting images did well focusing on the face in the image but noticed little else. On the other hand, the individuals whose moods were boosted by positive images took in much more of the environment, including details of the space around the face.

By reviewing the fMRI data, the scientists determined that the positively primed subjects had greater stimulation in the brain’s parahippocampal cortex — responsible for “memory formation and high-level visual processing,” as explained by the National Center for Biotechnology Information.

Evolutionarily, this makes a lot of sense. If a person was feeling threatened or anxious, it might have been due to a specific threat in the environment, in which case it was wise to focus primarily on that threat. All other details became less important. But when you see the world in a positive light, as one would through rose-colored glasses, your awareness widens to take in the details around you.

With this research in mind, it’s clear that, quite literally, when we are happy, we see the world around us more clearly.

The reason the world seems just a little better when we put on our red- and rose-colored glasses is because these glasses increase the wearer’s depth of field and enhance detail. The world comes into a sharper, brighter focus.

Lenses in other colors have different effects on our vision. We have written more extensively on this topic in a previous article about colored lenses, but here’s a quick review:

Armed with this information, it makes sense to have different shades for different situations.

As noted, pink lenses can sharpen contrast and improve your depth of field, and they can even reduce blue light effects. But there are times when rose-colored glasses can work against us.

Some people have voiced concern that red- or darkly tinted rose-colored glasses could be dangerous. Significantly shaded lenses can make warning signals challenging to see. Take, for instance, red traffic lights and stop signs. The red color of these signals are intended to make them more visible to prevent accidents. This effect is lessened when the viewer is wearing glasses with dark pink or red lenses.

The tendency to see things in a favorable light can also mean trouble for entrepreneurs, so much so that characters in the popular show, “Silicon Valley,” even referenced it: “Rose-colored glasses syndrome” describes the tendency of individuals to ignore or minimize problematic realities that later become business-threatening issues.

The two main symptoms of the “syndrome” are generally considered to be:

Rose-colored glasses syndrome is not an official diagnosis, of course, but rather an idiomatic short-hand to describe a person (or a team of people) who is so excited about possibilities that they overlook hazards.

But there is one fairly strange bit of evidence pointing toward the benefits of not seeing red. Well… at least for chickens.

In 1938, there was an article in Popular Mechanics about how a New Jersey prison solved a case of avian in-fighting with rose-colored sunglasses for chickens. Yes — chickens. The prison yard was home to a few young White Leghorn chickens fighting each other to the death, growing ever more agitated as blood appeared on their opponent.

After losing a few chickens to such fights, the remaining birds were outfitted with tiny aluminum frames that held dark pink-tinted lenses on hinges. As the birds looked down, the lenses fell away from their faces, so they were able to seek out food as usual. But when they looked up, the red lenses fell into place. As soon as the birds were no longer able to see blood, the fighting stopped.

Strange anecdotes aside, appropriately tinted rose-colored glasses are an excellent fashion choice for just about everyone. They tend to be most popular in the spring, beginning with the Valentine’s Day season in February.

Spring, summer, winter or fall, rose-colored glasses make a great addition to any collection. So get out there and find yourself a pair. You never know, they may just change your entire outlook on life. If not, you could always give that empty wine glass trick a try!