The Paralympics and Olympic Games: How visually impaired athletes can compete 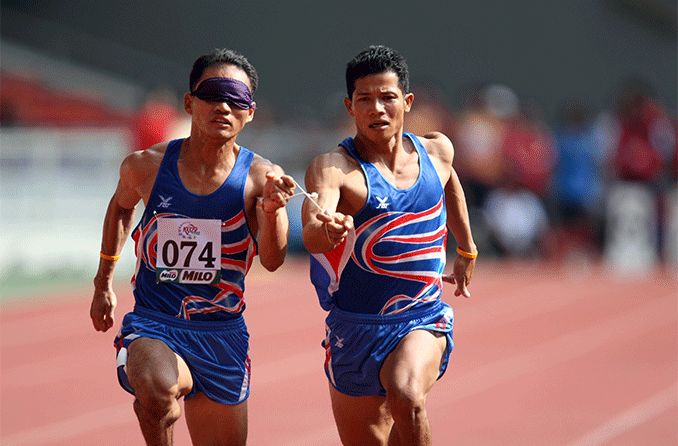 Competing in the Olympic Games is nearly every athlete’s dream. The hours of training and practice finally pay off when an athlete can represent their country on a worldwide stage.

For athletes who are blind or visually impaired, the Olympic dream may feel out of reach. Fortunately, the opportunity to compete is still available to them, not just in the Olympics, but in the Paralympics as well.

What are the Paralympics?

The first ever Paralympic Games were held in Rome, Italy, in 1960. The competition featured 400 athletes from 23 countries. This happened 12 years after neurologist Dr. Ludwig Guttmann organized the first unofficial games.

Dr. Guttmann had a spinal injuries center in Great Britain, where he used sports to rehabilitate injured patients. Over time, the sports used to heal became recreational, then moved into the realm of competition.

During the Opening Ceremony of the 1948 London Olympic Games, Dr. Guttman set up an archery competition. Competitors were made up of patients who required wheelchairs. He called it the Stoke Mandeville Games, which soon became an international competition.

The International Stoke Mandeville Games became what we know today as the Paralympic Games.

The word “Paralympic” combines the Greek preposition “para,” which translates to beside or alongside, and the word “Olympic.” The word communicates that Paralympics and Olympics are parallel competitions that exist side-by-side.

The classification process for Paralympic athletes

Blind Paralympic medalist, Millie Knight, skis down a slope with her guide. Knight only has 5% of her vision, meaning she skis with her ears. The guide skis in front of Knight and yells back instructions on how to navigate the course.

One process that sets the Paralympics apart from the Olympics is classification. Classification involves grouping athletes with similar degrees of limitation together. These groups then compete against each other in the games.

Each sport is classified depending on the activities required to compete in it. This allows the athletes to perform to the best of their ability, with minimal impact from their impairment.

Eligible Impairment is determined for each athlete

To compete, athletes must have a permanent impairment caused by trauma or an underlying health condition.

There are currently 10 Eligible Impairment types, which include:

Athlete Minimum Impairment Criteria is evaluated for their sport of choice

As mentioned above, each sport has its own classification requirements. Minimum Impairment Criteria (MIC) describes how bad an impairment must be to qualify in a particular sport.

The MIC ensures an athlete’s Eligible Impairment sufficiently affects their ability to meet the demands of a sport.

For example, if an athlete is missing a hand, their impairment may not meet the MIC for a running event. This is because a missing hand doesn’t impact one’s ability to run as much as someone who is missing one or both legs.

MICs are not designed to minimize the validity of an athlete’s impairment. It is a sports decision.

After athletes are deemed eligible to take part in an event, experts determine the athletes’ sport class. Some sports, like Para powerlifting, only have one class, while other events, like Para athletics, have more than 50 sport classes.

The point of sport classification is to make sure the competition is equal. However, this doesn’t mean all athletes in a certain class have the same impairment. Athletes with different impairments, but similar limitations, can compete in the same class.

For example, in Para ice hockey, you may see an athlete with paraplegia competing with an athlete who is an amputee.

It’s possible for  an athlete’s class to change after it’s been determined. If an athlete’s impairment worsens or improves, they must be reevaluated and reclassed.

SEE RELATED: How to find a sports vision specialist

How visual impairment is classified in the Paralympics

Classification for visual impairment is coded with the letter B, and rated as B1, B2 and B3.

B1 – Athlete has no light perception in either eye, cannot recognize the shape of a hand at any distance or in any direction.

B2 – Athlete has a visual acuity of 20/600 and/or a visual field of 5 degrees or less in their best eye with the best eye correction.

B3 – Athlete has a visual acuity between 20/600 and 20/200. They may also have a visual field less than 20 degrees, but more than 5 degrees in their best eye with the best vision correction. This is the least severe visual impairment accepted to compete in a Paralympic sport.

These are the standards used for classifying visually impaired athletes. However, it’s possible that they differ slightly depending on the sport.

Is it possible for a blind athlete to compete in the Olympics?

Blind athletes who have qualified for and competed in the Olympics

The first blind athlete to ever compete in the Olympics was Marla Runyan, who competed in distance running in the 2000 and 2004 Olympic Games. She was diagnosed at age 10 with Stargardt disease — a genetic form of macular degeneration that damages central vision.

Marla earned her spot in the games after placing third in the Women’s 1500 meter qualifier race. She placed eighth at the 2000 Olympic games, and is a five-time Paralympic gold medalist in her sport.

Im Dong-yhun is an Olympic gold medalist in Archery from South Korea. He has 20/200 vision in his left eye and 20/100 vision in his right eye, making him nearly legally blind. Im won Olympic gold in the team archery competition at the 2004 and 2008 Olympic Games. His team also took home the bronze medal in 2012.

Assunta Legnante has represented Italy at the Olympic and Paralympic games. She was born with congenital glaucoma in both eyes. The condition has taken all her vision, except minimal light perception in her left eye.

In 2008, Assunta participated at the Olympics games in Beijing. Since then, she’s competed in the 2012, 2016 and 2020 Summer Paralympic games, where she won two gold and two silver medals for shot put and discus.

The Olympics are focused on showcasing and honoring the strength, skill and determination of athletes. While the Paralympics uphold the same standard of excellence, they also give athletes — regardless of impairment — the chance to live their dream.

How to find a sports vision specialist

How a sports vision specialist can help you

Sports vision skills you can practice at home