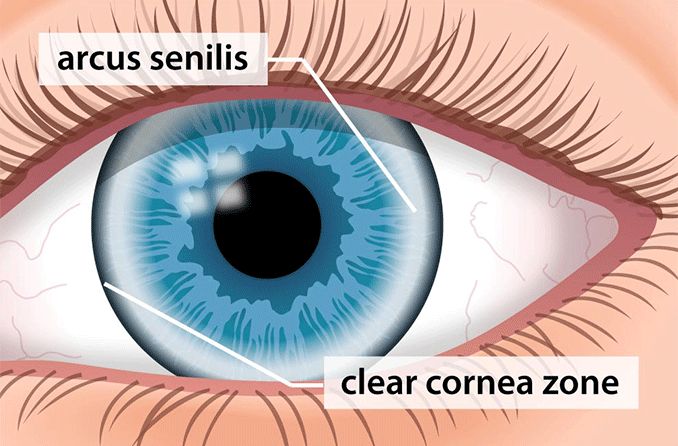 What is arcus senilis?

Arcus senilis is the medical terminology for a thin gray or white ring that often appears around the colored part of people’s eyes after about 60 years of age. Arcus senilis usually isn’t a serious problem: It poses no threat to eyesight, though it could be a sign of other health problems in some people.

If you or somebody you know notices that the colored part of your eyes has started developing a small ring at the edges, you’re bound to wonder what’s going on.

What does arcus senilis mean?

Arcus senilis comes from the Latin terms for “arch” and “elderly” (it’s called arcus juvenilis if it happens to younger people). Arcus senilis is a variety of corneal arcus.

Which parts of the eye are affected by arcus senilis?

At first glance, it looks like arcus senilis is in the iris, which contains eye color and controls the operation of the pupil. However, arcus senilis is confined to the cornea and the limbus.

What are the primary arcus senilis causes?

The gray or white rim that forms arcus senilis is made up of tiny fatty particles called lipids. Typically it starts out on the top and bottom of the cornea and then grows into a full circle.

It’s not completely understood why the cornea develops arcus senilis. Scientists suspect it’s because the limbus, the edge where the cornea connects to the white of the eye, changes as people age. Bits of fat from the rest of the body somehow get into the limbus to create arcus senilis. Normally, lipids travel in the bloodstream; that’s why blood tests measure your lipid levels. But the cornea has no blood vessels, so where could the lipids come from?

Well, the limbus has tiny structures called limbal vessels that allow a connection to the bloodstream. The consensus among scientists is that as people age, limbal vessels develop pores that allow lipids from the blood to leak into the edge of the cornea.

Arcus senilis usually happens in people 60 years of age and older. Indeed, more than seven out of 10 people develop arcus senilis after age 60.

People of South Asian an African ancestry are more likely to develop arcus senilis. It’s also more likely in men than women. Men also tend to have a larger arcus. Bilateral arcus senilis, which happens in both eyes, is the most common version. Unilateral, or one-eye, arcus senilis is far less likely but could be more dangerous, as it’s a symptom of advanced carotid vascular disease.

Fortunately, bilateral arcus senilis forms a thin ring in each eye and then just sort of sits there. Arcus senilis is essentially benign, which means:

Still, there are situations in which arcus senilis is a cause for concern. For instance, it could be a sign of high cholesterol if it shows up in younger people. High cholesterol is considered a risk factor for heart disease and other cardiovascular conditions. That means people under 60 — and especially men under 40 — who develop arcus senilis will most likely be advised to have their general practitioner assess their overall cardiovascular health.

Researchers are divided on whether arcus senilis is an accurate predictor for cardiovascular disease in people of every age. Multiple studies have generated conflicting results when testing this hypothesis.

What are the symptoms of arcus senilis?

Usually, there’s just one one primary symptom: a light gray or white line at the top and bottom of the corneas, eventually encircling them. You might notice it on your own, or an eye doctor could detect it while scanning your eye with a slit lamp device.

How do doctors treat arcus senilis?

Because arcus senilis poses no risk to eyesight, doctors typically monitor it but do not initiate treatments. However, your doctor may recommend that you get a blood test to measure the cholesterol levels in your blood.

Should you contact your doctor if you notice arcus senilis?

If you’re older than 60, a small gray or white ring around your corneas may happen naturally, posing no risk to your vision system. If it happens in only one eye, however, you definitely need to see a doctor about it.

If you haven’t seen an eye doctor in a while and you need to have your vision checked anyway, arcus senilis symptoms can be a good reason to set up an appointment.

If you’re younger than 60 or see this ring show up in your child’s eye(s), however, it should be checked out. At the very least, you’ll probably want to have a lipid-panel blood test to get an update on the risk of cardiovascular disease.

Corneal abrasions: How to treat a scratched eye