How Arthur the Aardvark made glasses cool for kids 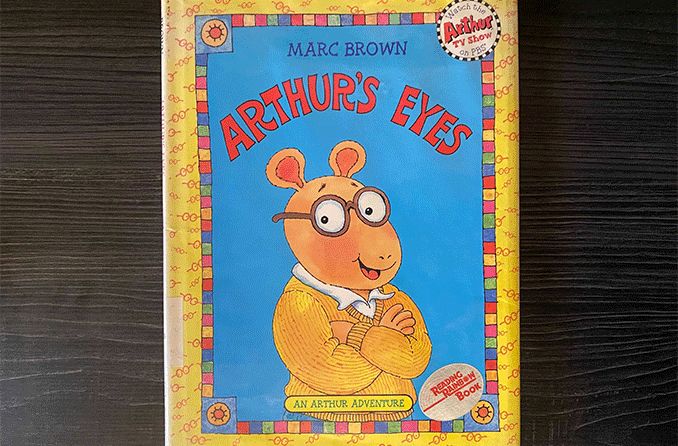 When you think of Arthur the Aardvark, you may think of his signature yellow sweater, his pokey ears and his big round eyeglasses. For many, his image invokes a sense of nostalgia. For others, it's a feeling of gratitude for having a strong role model growing up.

But for children with vision conditions and visual impairments, Arthur was more than just a beloved cartoon character. He was an inspiration, a teacher and a confidant when it came to dealing with childhood issues, including everything from arguments with siblings to insecurities about appearance.

Though the book-turned-TV-series recently came to an end after a 25-season run on PBS, its valuable lessons will continue to have a positive influence on kids everywhere.

One such lesson? It’s OK to need and wear glasses. They help you read the board in class and see the ball in the gym. And you can look great wearing them! (The list goes on.)

Generations of viewers and readers have both Arthur and his creator, author Marc Brown, to thank for this and many more powerful messages.

Here’s why Arthur has been so impactful:

Why did Arthur wear glasses?

What made author Marc Brown decide to give Arthur a pair of glasses in the first place? In an interview with WGBH, the show’s production company, Brown noted how the best ideas for his stories were inspired by real life.

He recalled a time when he picked his son up after school on the first day that he ever wore eyeglasses. His son remarked, “Dad, I thought all my friends were better looking!”

It was a moment that was reassuring for both Brown and his son. So much so that multiple characters were given eyeglasses throughout the run of the series. Both producers and viewers of the show appreciated the authenticity that the characters’ various vision problems presented to the world — so they continued including them.

How glasses helped Arthur (and other kids)

In the episode “Arthur’s Eyes,” Arthur deals with several issues that may indicate a vision problem:

Like many children, Arthur’s school nurse refers him to an eye doctor after his less-than-perfect vision screening. His parents take him to see Dr. Iris, an optometrist who gives him an eye exam and sets him up with his first pair of glasses. Arthur notices immediately how much better he can see, but he is teased for his eyewear when he gets back to school.

To avoid being called names like “four-eyes,” Arthur stops wearing his glasses and even tries to lose them. He can’t see well without them though, and he manages to go into the girls’ bathroom by mistake. It’s a harrowing experience for everyone involved.

That night, Arthur resigns himself to the fact that he’ll have to be “a four-eyed weirdo.” But then he sees Wilbur Bunny — the actor who plays Bionic Bunny — on TV wearing the very same glasses. If Wilbur Bunny wears glasses, they must be cool. (In the book, a teacher who also needs glasses helps restore Arthur’s confidence by telling him how important glasses are.)

Arthur returns to school the next day wearing his glasses, and thanks to his newfound confidence, all the teasing rolls right off his back. Once he can see the board and the ball clearly, he aces his math quiz and plays much better in the next basketball game. It turns out that glasses really do make a difference.

At the end of the story, Francine, the student who picked on him the most, shows up to school wearing a pair of fake glasses. Why? She thinks they make her look beautiful (plus, Wilbur Rabbit wears glasses too). So, not only did Arthur stand up to bullying, he actually influenced others to get glasses of their own!

To summarize: After getting glasses, Arthur showed improvement in:

If your child needs glasses, they may also experience improvement in similar areas.

SEE RELATED: Are learning-related vision issues holding your child back?

Why all kids should learn about glasses

It can be confusing when you’re a kid and your vision isn’t quite “perfect.” And learning you need glasses can be scary. You don’t know:

Having it all explained to a child by their eye doctor, parents or other adults is meant to help but can often feel intimidating.

That’s where Arthur steps in. Acting as a peer to the many children who have struggled with myopia (nearsightedness), hyperopia (farsightedness) and other vision issues, Arthur puts things in kid-friendly terms. He makes it easier to understand and navigate the struggles that come with needing glasses and having poor vision. Arthur and his friends experience realistic difficulties and inspire viewers with the ways they find to overcome them.

With myopia prevalence rates up to 42% among school-aged children in North America, kids need characters like Arthur now more than ever. And according to recent findings, the rates are escalating.  Arthur helps children understand that glasses are a good thing for those who need them.

What Marina teaches kids about living with blindness

It’s not just Arthur who has a vision issue. The show includes several other characters with glasses, and a soccer-playing rabbit named Marina who experiences blindness.

After the episode “Arthur’s Eyes” aired, executive producer Carol Greenwald said the show got mail from children who were blind, thanking them for featuring someone with glasses. Realizing they had an audience with additional vision impairments, the creators introduced Marina Datillo, a blind character.

Marina participates in everything she wants, including activities such as soccer, gymnastics and yoga. After taking lessons for a long time, she makes the team at her first tryout.

The gymnastics coach says that being part of the team requires “strength, flexibility, and above all, heart.” The same can be said for those with limitations in their eyesight.

By sharing Marina’s story, Arthur taught children that people with low vision and other disabilities may experience the world differently, but they shouldn’t be treated differently. It also helped viewers get a better understanding of what it’s like to navigate the world with less-than-perfect vision.

The Arthur showrunners have never been shy about inclusivity or truthfulness in their storytelling. Plotlines have touched on sensitive issues that many kids encounter, including food allergies, learning differences, divorce, asthma and dementia.

SEE RELATED: How to prepare your visually impaired child to start school or day care

One of the more remarkable things about Arthur is that you could watch it for free because it aired on PBS. The show was available to all demographics and made an impression on children in all walks of life.

Not only did Arthur have a multi-year run in the Macy’s Thanksgiving Day Parade, but the series also won seven Daytime Emmy Awards and received several Daytime Emmy Award nominations. It also won a British Academy Children's Award and was nominated for a GLAAD Media Award (just to name a few of the show’s many honors).

The Arthur book series has landed a spot on the New York Times Best Seller list, selling over 65 million books in the U.S. alone. Together, the book and TV series have reached children in over 80 countries over the past 25 years.

Although the TV series stopped airing new episodes in 2022, Arthur has left an impact on children that will likely continue for years to come. You can still stream episodes on the free PBS Kids Video app and check out Arthur books at your local library.

This all goes to show that Arthur is more than just a cartoon aardvark who wears glasses. He’s a worldwide sensation. And he makes it cool and honorable to wear glasses.

Looking for more glasses-wearing characters your child can look up to? Check out these popular children’s book and movie characters who wear glasses next.

Behind the scenes with Arthur creator Marc Brown. WGBH. January 2022.

A review on the epidemiology of myopia in school children worldwide. BMC Ophthalmology. January 2020.

How to get kids to wear glasses