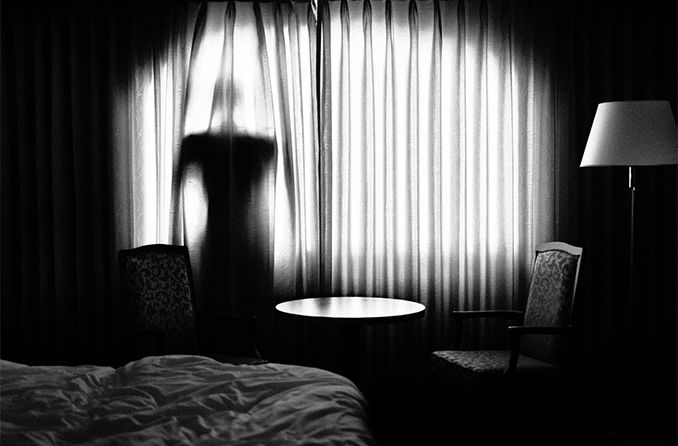 Is vision necessary to “see” visions?

The discussion around whether ghosts exist has long been a debate. Though many have experienced a spooky encounter, it is usually short-lived and once-in-a-lifetime. For blind people with Charles Bonnet syndrome, seeing ghosts or chilling figures may be a regular occurrence.

So much about this condition is still unknown. Yet the symptoms of Charles Bonnet syndrome (including “seeing ghosts”) feel very real to those experiencing them. Which may be proof that seeing isn't always believing.

When the eyes stop sending images to the brain for processing due to partial or full vision loss, the brain sometimes creates its own images. The brain will pull images and other stored information to create and project these hallucinations.

Hallucinations caused by Charles Bonnet syndrome often are so vivid that they resemble a real image or being. However, the person knows that they’re hallucinating and has no other sensory hallucinations, such as sound, smell or touch.

Between 10% and 30% of people with severe visual impairment in both eyes experience Charles Bonnet syndrome. Few people are aware of the condition and may be embarrassed by the hallucinations. Therefore, the actual number is suspected to be much higher.

People with Charles Bonnet syndrome cannot control when a hallucination appears, how long it lasts or what it is. Visions usually consist of different colors, patterns and shapes. Sometimes, however, more disturbing visions occur.

Dr. Dominic ffytche, a specialist in Charles Bonnet syndrome, says people often report seeing bodiless faces. These faces are often disfigured or have twisted features and seem to loom in front of the subject.

Dr. ffytche says people have also described seeing unfamiliar figures from a bygone era. The figures will be wearing Victorian-style clothing with an aristocratic wig or bonnet.

In fact, seeing people from the past is common in people with Charles Bonnet syndrome. However, why the brain projects these particular images is unknown.

Judith Potts is the founder of Esme’s Umbrella. She established the organization to honor her mother, Esme, who had Charles Bonnet syndrome. Judith says her mother would frequently see an “Edwardian street-child.” Esme also saw faceless people sitting on her couch, who would only disappear if she went up and tapped them on the shoulder.

Other hallucinations Esme experienced included seeing gargoyles jump around her kitchen. She also saw worms wiggle around in her food.

A trauma doctor from London named Amit Patel lost his sight suddenly in 2013. Shortly after the incident, a girl resembling Samara from the 2002 horror movie The Ring appeared in front of him.

In an interview with Fight for Sight, Dr. Patel describes the girl as “wearing a white cloak, with long dark hair and blood coming out of her eyes.”

Dr. Patel describes the incident further in an interview with The Independent, saying, “She was so vivid. I could see the detail on her dress. There was blood smeared on her face.” According to Dr. Patel, the hallucination of the girl has continued to appear regularly since 2013.

Experts believe stress can be what turns a fantastical hallucination into a frightening one. A 2009 case report examined a legally blind Australian woman who had Charles Bonnet syndrome:

Black Saturday marks an event in Australian history. Brushfires ravaged 14 regions across the state of  Victoria. The woman lived in one of the affected areas, and she was evacuated from her home. For several days following the event, the woman’s hallucinations included seeing her family members’ faces melt off.

With this in mind, it seems fair to assume that the ongoing COVID 19 pandemic has caused a spike in unsettling hallucinations. A study done between June and July 2020 surveyed 45 people with active Charles Bonnet syndrome. Of those surveyed, 56% experienced more frequent and sinister visual hallucinations during lockdown.

Dr. Patel, mentioned earlier, admitted that he also experienced more hallucinations in the early days and weeks of lockdown.

Scientists think the scarier visions may be caused by loneliness, lack of exercise and environmental factors. This includes pandemic-related stay-at-home orders and frequent exposure to depressing news.

Stress triggers disturbing visions, which create stress for the person seeing them, and a vicious cycle occurs. To worsen matters, many people fear they will not be believed or will be labeled mentally ill if they share what they're seeing. This includes keeping their medical and eye doctors in the dark.

As a result, the stress isn’t dealt with, which only makes said vicious cycle all the worse.

SEE RELATED:  How stress can affect your vision

Research to find a cure

In August 2020, Fight for Sight announced that it would fund two research projects. The funding was granted to Cardiff University and the University of Oxford. The goal of the research is to better understand Charles Bonnet syndrome and hopefully find a cure.

Peripheral vision draws from the previous experience and expectation part of the brain. The study will use fully sighted people and induce hallucinations to see how they compare to those with Charles Bonnet syndrome.

The University of Oxford will use MRIs to compare the brains of fully sighted people with the brains of people with Charles Bonnet syndrome. The theory is that abnormal chemical levels in the visual areas of the brain may be the cause of hallucinations.

Between these two studies, the goal is for the findings to be significant enough to spark bigger, more in-depth studies.

The key to finding a cure for Charles Bonnet syndrome is awareness and acceptance. The hope being that this will encourage people to share their experiences. Educating people can create a community. This could help those who otherwise may suffer silently or alone.

There are few resources available within the U.S. for people with Charles Bonnet syndrome, compared to the UK and Australia. The American Foundation for the Blind offers general support for people with the condition.

Fortunately, the internet has made it easier than ever to spread the word. For example, Facebook groups related to Charles Bonnet syndrome build community. They can also be a resource for those who care for people who have the syndrome.

Resources for the blind within the U.S.

American Foundation for the Blind:

National Federation of the Blind:

International resources for the visually impaired

READ MORE: What is an aura?

Charles Bonnet syndrome: So much more than just a side effect of sight loss. Therapeutic Advances in Ophthalmology. November 2019.

Exacerbation of visual hallucinations in Charles Bonnet syndrome due to the social implications of COVID-19. BMJ Open Ophthalmology. February 2021.

Fight for Sight fund two studies to investigate the cause of visual hallucinatory condition in people with sight loss. Fight for Sight. August 2020.

What is an aura and how does it affect vision?