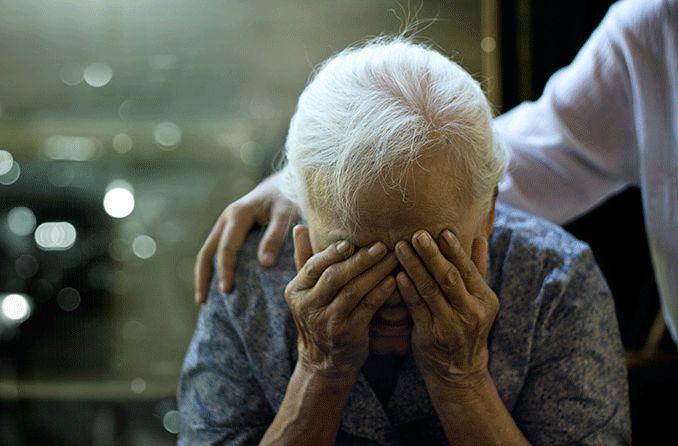 The connection between your eye health and dementia

What risk factors do eye disease and dementia have in common?

Vision impairment in older people can be caused by normal eye aging, eye disease, or a health condition (such as stroke). Dementia can itself also cause changes in vision. In fact, several studies, in addition to this one, have shown that vision impairment and dementia have a clear link.

What is the connection between the eyes and the brain?

The eyes collect light rays which come to a focus on the retina (the light sensory tissue in the back of the eye). The retina converts this light into electrical signals. The optic nerve connects the eye and the brain. It then relays these signals to the brain's visual cortex for processing and comprehension.

The retina and optic nerve are actually formed from brain tissue during development. They are considered to be part of the central nervous system, comprising the brain and spinal cord. Due to this close connection, damage to certain parts of the brain can affect the optic nerve and retina as well.

How can poor eyesight increase the risk of dementia?

Poor vision due to an aging eye or eye disease can decrease the amount of stimulation that the visual pathways of the brain receive.

“People with poor vision may have greater difficulty reading. So they may read less often, further decreasing brain stimulation. This type of decrease in sensory and cognitive input may accelerate cognitive decline,” says Brendan Kelley MD, cognitive and dementia researcher and professor at UTSW Medical Center. When the visual pathways receive less stimulation, there is often decreased brain stimulation.

Also, dementia can affect parts of the brain that contribute to vision and visual processing. This includes the optic nerve and visual cortex, which relay and process visual information. In these cases, poor vision is due to degeneration of brain tissue.

Which eye diseases have been linked to a higher risk of dementia?

The BMC Ophthalmology found that certain eye diseases were associated with an increased risk of dementia.

There was an increased risk of dementia with the following conditions:

These results were compared to those who did not have any eye conditions at the beginning of the study.

This risk increased even more if other systemic (general health) conditions were also present, including:

Certain eye conditions in addition to a systemic condition were more likely to increase the risk according to the study:

These eye and health conditions are more common in older people and generally get worse over time.

It is important to note that the researchers did not state that the eye conditions were the cause of dementia. It was only stated that they were associated with a higher risk of developing it.

The study did not find that glaucoma was associated with an increased risk of dementia. But, they did find a link between glaucoma and vascular dementia, a type of dementia that can occur after an individual experiences a stroke.

Can cataract surgery decrease the risk of dementia?

Yes! A 2021 study published in JAMA Internal Medicine found that cataract surgery resulted in a lower risk of developing dementia among older adults. A 2022 study estimates that clear vision and healthy eyes would have potentially prevented up to 100,000 current dementia cases.

In fact, a number of studies have found that recognizing and treating vision and hearing loss in older adults may decrease their risk of dementia. It can slow progression even in people already having dementia, according to Dr. Kelley.

Eye disease, vision issues and dementia are all more likely to occur as we grow older. An eye exam with a qualified eye doctor can help to determine whether vision problems are due to an eye condition.

Are there eye tests that can detect early-stage dementia, such as Alzheimer's disease?

There are currently no eye or vision tests that can detect early-stage dementia. There have been a number of studies that have investigated a link between vision and Alzheimer’s disease. The various studies include the following findings:

Research is ongoing into the link between the eyes and dementia, including Alzheimer’s disease. It is hoped that this research will advance the ability of non-invasive tests to detect the early stages of dementia.

What are some vision problems that can occur as people age?

As people get older, some signs that they are having vision issues include:

Dementia can affect parts of the brain, such as the optic nerve and visual cortex, that relay and process visual information. This means that someone with dementia may have vision-related issues, although their eyes are healthy.

How can I help a loved one with vision impairment and dementia?

Individuals with vision impairment and dementia have unique challenges. For example, they are more likely to:

Things that you can do to help are:

FURTHER READING: How to help someone who is visually impaired

What are some things I can do for better eye and brain health?

These simple but effective lifestyle changes can improve your eye and brain health:

It is critical to have a team of doctors and health care professionals that can provide care and support for an individual living with dementia. It is also essential to schedule routine eye exams to maintain clear vision and healthy eyes in someone with dementia. Good eyesight will improve their quality of life and may even slow down the progression of dementia.

Addition of vision impairment to a life-course model of potentially modifiable dementia risk factors in the US. JAMA Neurology. April 2022.

Associations of ophthalmic and systemic conditions with incident dementia in the UK Biobank. British Journal of Ophthalmology. September 2021.

How can exercise improve cognitive performance?