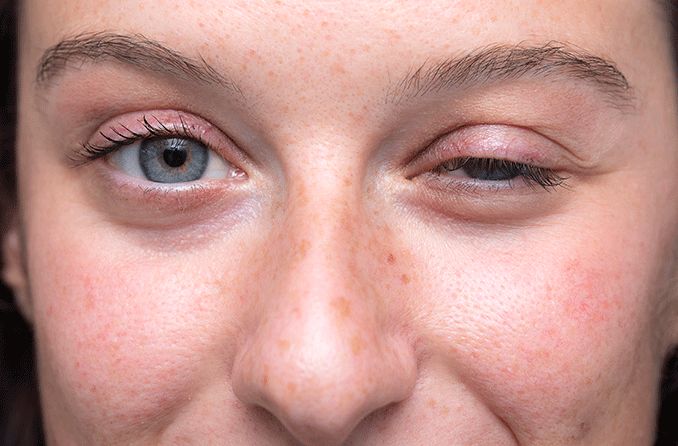 What is ocular myasthenia gravis?

Ocular myasthenia gravis (MG) is an autoimmune disorder. It attacks the muscles around the eye, leading to eye fatigue and weakness. It can be a precursor to the development of systemic myasthenia gravis. The two main symptoms of ocular MG are ptosis (drooping eyelids) and diplopia (double vision).

What is systemic myasthenia gravis?

In individuals with MG, the immune system produces antibodies that block or destroy these receptors. It can impact up to about 80% of the receptors in a particular muscle group. While the body is able to replace receptors, it cannot do so at a fast enough rate to maintain muscle strength. This causes the weakness associated with MG.

Myasthenia gravis is not genetically transmitted, nor is it contagious. It can occur at any age but is most commonly found in women under 40 and men over 60. Many individuals who develop systemic MG initially experience ocular symptoms.

For around 15%, the condition will remain in the eyes; others will develop weakness in other areas of the body. However, if an individual has only experienced ocular symptoms for five years, they are unlikely to develop systemic MG.

Eye muscles have certain features that can make them more susceptible to the effects of MG. They have fewer receptors compared to other muscles in the body, so they will quickly feel the effects when antibodies attack.

The muscles around the eye also contract at a much faster rate and are more easily fatigued than muscles that contract more slowly.

What are the symptoms of ocular myasthenia gravis?

There are two main symptoms of ocular myasthenia gravis:

The eyelid muscle weakness brought on by MG can cause the eyelids to droop. The eyelids can, in turn, obstruct vision by physically blocking all or part of the pupil.

Extraocular muscle weakness can interfere with the brain’s control over the movement of the eyes. When this happens, the eyes may no longer align They may also move at two different rates, leading to double vision.

Ocular myasthenia gravis symptoms will fluctuate throughout the day, sometimes worsening in the evening. Individuals can often find temporary relief by resting their eyes.

How is ocular myasthenia gravis diagnosed?

To diagnose ocular myasthenia gravis, an eye doctor will examine the eyes and ask about symptoms. They will compare performance of the eye muscles when they are rested and when they are tired. If the eye doctor believes that MG may be causing the symptoms, they will refer the patient to a neurologist.

The neurologist may use a needle to send a small electrical charge into the muscle. This is a diagnostic test called an electromyogram. The physician will measure the amount of electrical activity that appears when the muscle is at rest and contracted. This will help them identify how the muscle responds to stimulation.

There is also a blood test to check for systemic myasthenia gravis. The test measures the number of anti-acetylcholine receptor antibodies. However, this test is less accurate in cases of ocular myasthenia gravis. A negative result does not necessarily mean the patient is negative for ocular MG.

What are the treatment options for ocular myasthenia gravis?

Treatment of ocular myasthenia gravis depends on the particular symptom and its impact on quality of life. For cosmetic concerns, the physician may recommend treatments that are non-pharmaceutical.

Treatment options for common symptoms of ocular myasthenia gravis include:

Each of these can physically help prevent the eyelid from obstructing vision.

A physician may recommend wearing an eye patch to narrow vision to one view. The covered eye can grow weaker if it remains unused, so it is important to alternate which eye is covered.

Another option is the addition of prisms to the patient’s glasses, although this treatment is less common.

Pyridostigmine (Mestinon) is a medication that helps the production of acetylcholine. It can be prescribed to temporarily help improve muscle strength.

The corticosteroid prednisone and the immunosuppressants azathioprine, mycophenolate and cyclosporine may be prescribed. They can help control the production of abnormal antibodies.

However, these drugs can cause severe side effects.

In some cases, a thymectomy, or removal of the thymus gland, can be used to treat generalized myasthenia gravis. The thymus gland is located in the upper chest and helps with the development of the body’s immune system during childhood.

The removal of this gland is not dangerous in adults and can help with reducing weakness in those suffering from MG. However, thymectomies are less commonly recommended for individuals suffering from purely ocular MG.

When should I see a doctor?

What are common symptoms of autoimmune disease? Johns Hopkins Medicine. Accessed May 2022.