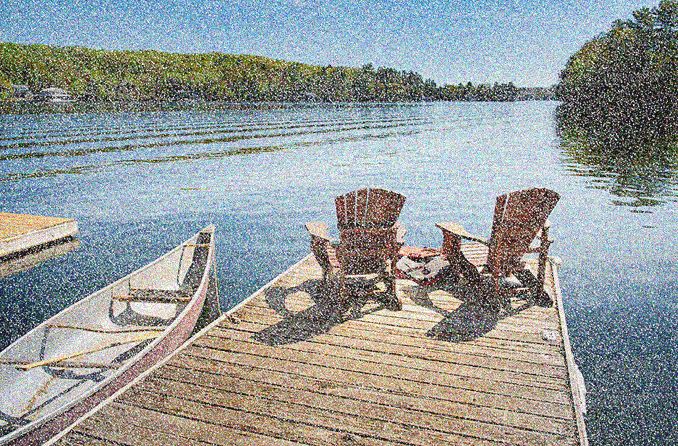 What is visual snow syndrome?

Visual snow syndrome is a rare neurological condition that causes images and scenery to appear “snowy,” as if the world in front of a person is filtered with television static. The condition does not go away, even when a person closes their eyes, and it can also cause light sensitivity and floaters.

Although visual snow syndrome affects the way someone sees, it is not related to the structure of the eyes. It has to do with the way images are processed in the brain.

Those who have visual snow syndrome (VSS) see small, scattered dots that occur throughout the field of vision. The dots do not get bigger or smaller and do not form clumps.

The intensity level of visual snow syndrome can range from mild to extreme, depending on the person and the symptoms they experience.

How rare is visual snow syndrome?

A 2020 study found that about 2% of the United Kingdom’s population has visual snow syndrome. However, the number of people with VSS worldwide is difficult to determine because it’s often misdiagnosed.

Because it is so rare, there’s a great deal of research that needs to be done in order to understand visual snow better and provide proper care for those who have it. Organizations including the Visual Snow Initiative, Eye on Vision Foundation and many more support research behind the disease.

While there is no known cause for visual snow syndrome, it most likely results from a malfunction in the brain. VSS researchers consider it a neurological condition with both sensory (visual) and psychiatric aspects.

Several other brain disorders — such as migraines, tinnitus (ringing in the ears) and depression — are associated with abnormal cortical rhythms and are also more common in people with VSS.

The symptoms of visual snow syndrome are primarily visual, although some people also experience things such as headaches, light sensitivity and ringing in the ears.

Specific signs related to the condition include:

Additionally, those with visual snow syndrome may experience symptoms that are non-visual, including:

Someone who experiences migraines may have more intense effects and symptoms of visual snow syndrome while they are having a migraine.

Additionally, recreational drugs and alcohol were reported to worsen symptoms in many sufferers of visual snow syndrome.

How is visual snow syndrome diagnosed?

There is a process of elimination when it comes to diagnosing visual snow syndrome. Patients are initially examined by an ophthalmologist to rule out existing eye problems. An MRI and/or a CT scan is also performed by a neurologist to eliminate the possibility of other neurological conditions.

After these initial tests, a doctor will review the patient’s medical history and make note of any recurring symptoms. If certain symptoms are present after other conditions are excluded, a doctor can conclude whether or not visual snow syndrome is to blame.

In order for visual snow to be diagnosed, static or snowy vision must remain constant, and at least two of the following symptoms must be present:

Visual snow syndrome can be very difficult to diagnose, which is why the testing process is so thorough.

There is currently no cure for visual snow syndrome, but patients can do things to manage their symptoms. For example, you can:

Certain anticonvulsant and antidepressant medications are available to treat visual snow syndrome. However, they do not completely eliminate symptoms and the side effects are often worse than the cure.

Talk to your doctor about your symptoms in order to manage them properly. For a condition like visual snow syndrome, it’s important to report your experience to both your eye doctor and your neurologist.

READ NEXT: What are phosphenes (seeing stars)?

Brightness constancy and the nature of achromatic colors. Journal of Experimental Psychology. June 1948.

Prevalence of visual snow syndrome in the UK. European Journal of Neurology. May 2020.

How afterimages play tricks on your eyes

Flashing lights in the eyes (photopsia): What causes them?