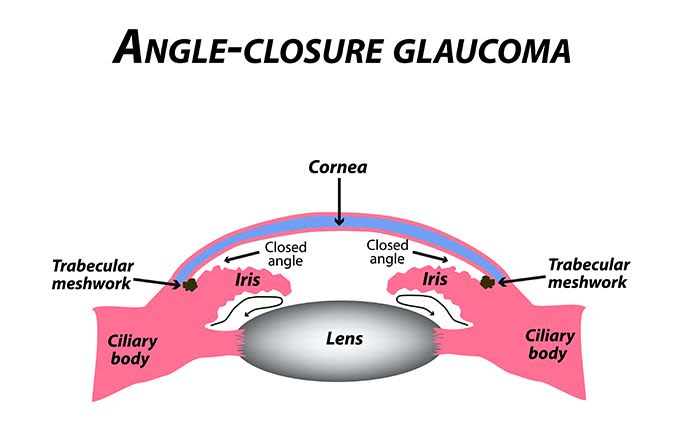 Acute narrow-angle glaucoma occurs suddenly, when the colored portion of your eye (iris) is pushed or pulled forward. This causes blockage of the drainage angle of the eye, where the trabecular meshwork allows outflow of fluids.

When internal eye structures are blocked in this way, your eye's internal pressure (intraocular pressure or IOP) may spike and possibly damage the optic nerve that transmits images from the eye to the brain.

These signs may last for hours or until the IOP is reduced. With each narrow-angle glaucoma attack, part of your peripheral vision may be lost.

Acute angle-closure glaucoma is a medical emergency. If the high eye pressure is not reduced within hours, it can cause permanent vision loss. Anyone who experiences these symptoms should contact an ophthalmologist immediately or go to a hospital emergency room.

Some chronic forms of narrow-angle glaucoma, however, can progress very slowly and cause eye damage without any obvious symptoms or pain in early stages.

Causes of the abnormal positioning of the iris in narrow-angle glaucoma include:

In addition to hyperopia, risk factors for acute angle-closure glaucoma include:

Sudden eye pain, headaches and red eyes can be symptoms of narrow-angle glaucoma.

The goal of treatment is to reduce intraocular pressure as soon as possible.

This can be done with systemic medications taken orally or sometimes given intravenously. Topical eye drops for glaucoma also are often used to treat narrow-angle glaucoma. Frequently, laser and/or nonlaser glaucoma surgery may be required to reduce the IOP.

Remember that acute angle-closure glaucoma may be triggered by anything dilating the pupil, resulting in the iris blocking the drainage angle in the eye's anterior chamber.

Dim lighting, eye drops administered by your eye care practitioner during an eye examination or certain medications such as antihistamine/decongestant drops or cold medications may cause an acute angle-closure glaucoma attack.

In acute forms of glaucoma, optic nerve damage and permanent vision loss can occur within hours if the eye's drainage angle is not opened to allow the excess aqueous to exit the eye, thereby reducing the intraocular pressure.

With contributions and review by Charles Slonim, MD and Marilyn Haddrill.

Are red eyes from coronavirus or allergies?

The importance of healthy vision for road safety