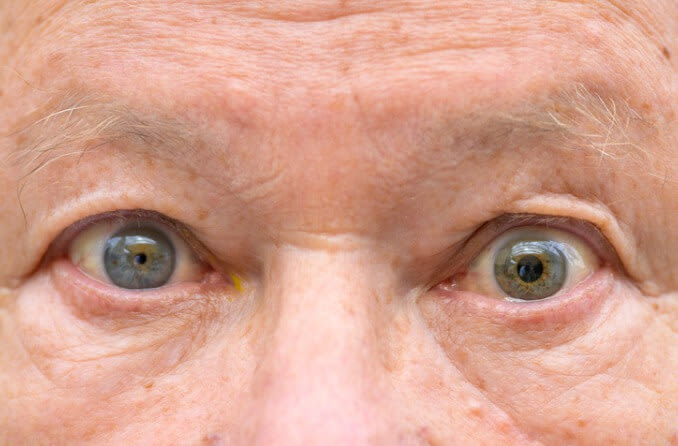 What is Marcus Gunn pupil?

Marcus Gunn pupil is a rare condition in which a person’s pupil does not respond to light correctly in one eye. It is also called Marcus Gunn syndrome or relative afferent pupillary defect (RAPD).

In healthy eyes, pupils constrict (get smaller) in bright conditions and dilate (get bigger) in dark conditions. Both pupils constrict together when light is sensed — even if it’s only sensed in one eye. This action is called the consensual light reflex.

People with Marcus Gunn pupil have one eye that activates the consensual light reflex, but the other eye does not. Because patients with a Marcus Gunn pupil do not have unequal pupils, it is not easily noticed. It requires testing by a trained professional such as an ophthalmologist, optometrist or neurologist.

While RAPD on its own is not dangerous, it is often a sign of a serious disorder of the retina, optic nerve or brain. If undiagnosed, these underlying causes may lead to permanent vision damage or even loss of life.

Relative afferent pupillary defect is usually caused by a problem in the retina (the light-sensitive tissue at the back of the eye) or the optic nerve (the connection that takes the light signal from the eye to the brain). There are also other, less common causes.

Causes related to the retina

Causes related to the optic nerve

Causes related to the brain

There are different levels of severity — or types — of relative afferent pupillary defect. This includes other conditions that are not RAPD, but can cause the symptoms seen in Marcus Gunn syndrome.

The main sign of Marcus Gunn syndrome is having one pupil that does not constrict properly in response to light. It is often associated with some form of vision loss, including loss of central vision. Depending on the cause of your RAPD, other symptoms may be present.

For example, if retinal detachment is the cause, you may experience:

If optic neuritis is the underlying cause, other symptoms may include:

Marcus Gunn pupil caused by glaucoma may also cause:

It’s possible that other symptoms won’t be very noticeable. It’s important to take notice of changes in your vision and discuss them with your doctor.

A widely used method for testing RAPD is called the “swinging light test.” This test uses a narrow-focused light to observe the pupillary light reflex.

The patient will sit in a dimly lit room and focus on a distant object, like the Snellen chart on the wall. While their eyes are focused, the eye doctor will move the light from side to side, shining it directly into each eye.

The doctor will keep the light equally distant from each eye, and hold it for at least three seconds, so the pupil can stabilize. Both pupils will be observed for consensual reflex, though the light is only focused on one eye at a time.

How the pupils respond during this test determines what level of RAPD is present.

Another test that can support the diagnosis of a Marcus Gunn pupil is the “red desaturation test,” in which a patient is asked to look at a red object with one eye at a time. The doctor will ask the patient to rank the object as a brightness of 10 with the unaffected eye, and then will ask what level of brightness (out of 10) the red target appears with the affected eye.

Testing for RAPD when one pupil does not move

The same swinging light test is conducted by an eye doctor. But rather than focusing on the non-responsive pupil, like in a typical test, they observe the functioning pupil and how it responds when light is shone in each eye.

When one pupil is unresponsive, anisocoria is usually present as well. Anisocoria can cause a false RAPD and this needs to be taken into account when a reverse RAPD test is performed.

Marcus Gunn pupil cannot be treated directly, as it’s a symptom of an underlying condition. The method of treatment depends on the underlying cause.

Treatment varies for problems in the optic chiasm, optic tract and pretectum. Your eye doctor will be able to recommend the best treatment options for your individual case.

Treatment for other causes

If you notice any unfamiliar changes in the appearance of your eyes, including the size of one or both pupils, it’s best to consult with an eye doctor.

It’s also important to see a doctor if any sudden vision changes occur. This may include sudden blurry vision, an influx of eye floaters, random flashes of light in your vision or other unusual changes.

The sooner you see an eye doctor for your symptoms, the faster they can diagnose and treat the problem and restore your eyesight to normal.

Marcus Gunn pupil: What is it, cause, treatment and more. Osmosis. Accessed August 2022.

What is a Marcus Gunn pupil? Medical News Today. August 2017.