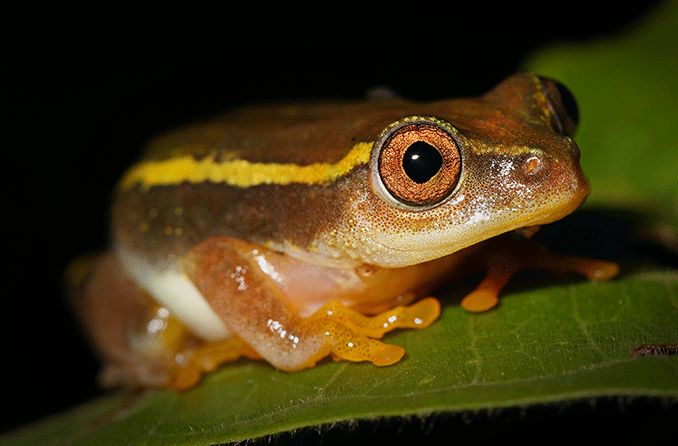 Tadpole pupil is a rare occurrence in which the pupil is dilated unevenly. This results in an irregular pupil shape that resembles a tadpole. The appearance of tadpole pupil usually only lasts a few minutes and resolves on its own.

It’s possible for episodes of tadpole pupil to be isolated, meaning it only happens once, or it may reoccur intermittently over a period of days or weeks. It usually affects one eye only, though it’s possible for both eyes to be affected.

While experiencing tadpole pupil can be unsettling, there is usually no need for alarm. However, frequent episodes may be a precursor for conditions such as Horner’s Syndrome or Adie Tonic Pupil, and should be examined by an eye doctor.

Experts are still researching the exact cause of tadpole pupil. It’s believed that the immediate cause of pupil distortion is a spasm in the iris dilator muscle.

The iris dilator muscle is a ring of cells in the iris that are arranged around the pupil, like the spokes of a wheel. These cells take orders from the sympathetic nervous system — the same system that gives us our “fight or flight” response.

When the cells contract, it allows the pupil to dilate (mydriasis). To dilate evenly, all of the cells in the circle must work together.

In the case of tadpole pupil, doctors believe that only a portion of the cells spasm, which causes a peak in one section of the pupil.

Experts who have observed tadpole pupil report that the pupillary light response still works during a spasm. This means the pupil will still constrict in bright conditions and dilate in dark conditions. However, the part of the pupil that is affected, stays irregular during this response.

What provokes a spasm in the iris dilator muscle is still being investigated. There have been a few cases in which someone experiences tadpole pupil upon waking up from sleep. Physical exercise has also been noted as a trigger for the phenomenon. However, the exact reason these activities could cause tadpole pupil is unknown.

The main symptom of tadpole pupil is the appearance of the pupil itself. Usually only one pupil will appear irregularly shaped, with the “peak” occurring at any point around the pupil.

It’s possible to have no other symptoms. However, some people who have experienced tadpole pupil have also noticed one or more of the accompanying symptoms:

It’s important to note that these symptoms may also be signs of a stroke, which is a serious medical emergency. If the unusual feeling in your face is accompanied by droopiness, your speech is slurred, or if you have trouble lifting one or both arms, get immediate medical attention.

Because tadpole pupil is an irregular, fleeting occurrence, it can be difficult for an eye doctor to examine it while it occurs. In some cases, patients will take pictures of their eyes during an episode, then show them to an eye doctor at their next appointment.

Your eye doctor will likely ask:

From there, a series of tests may be done to rule out underlying causes. Dilute pilocarpine testing uses eye drops that force the pupil to constrict dramatically. The test will either confirm or rule out Adie’s pupil.

Apraclonidine testing may be done to determine Horner’s syndrome. Apraclonidine drops reverse the effect of Horner’s Syndrome and allow the pupil to dilate normally again. Since Horner’s Syndrome can be a sign of serious disorders — such as a lung tumor or a dissection (break) in the arteries leading from the heart to the eye — your doctor may order tests to rule out these conditions as well.

Different tests may be run on the brain to determine whether a neurological problem, such as brain lesions, is causing tadpole pupil.

It is important to remember that tadpole pupil rarely lasts longer than 5 minutes, while most other conditions that affect the size and shape of the pupil will last much longer.

Other conditions that can affect pupil shape and size

Anisocoria is a general term to describe having two different pupil sizes. There are four types of anisocoria:

Damage to this system, usually caused by an underlying condition, affects a person’s pupil dilation. People with Horner’s syndrome may also have ptosis (droopy eyelid) on the affected eye, and a lack of sweating on that particular side of their face.

Adie’s tonic pupil is a condition that causes unequal pupil sizes and a slow pupillary reaction to light. The affected pupil will stay large even in bright light.  It also causes an inability to focus on things close. It occurs as a result of damage to nerve cells behind the eye. These cells control pupil dilation and constriction. Adie’s pupil often results in an irregular pupil.

Argyll Robertson pupil is a disorder in which both pupils are small and very often irregular. The pupils do not become smaller in bright light, but will change in size when looking from far to close.

Argyll Robertson pupils can be a sign of syphilis that has been present for many years. Other neurological problems caused by syphilis are lack of coordination (ataxia) and sudden severe pains in different parts of the body.

Oculomotor nerve palsy affects the third cranial nerve. This nerve controls shrinking of the pupil and movement of several muscles attached to the eyeball and in the eyelid. When the blood supply to the nerve is damaged, it mainly affects the muscles around the eye and not the pupil.

When the damage is caused by something pressing on the outside of the nerve, it usually affects the pupil, which will stay large even in bright light (blown pupil). The pupil typically stays round and does not become irregular.

Oculomotor palsy is often painful and, when it presents with a large pupil, may be a sign of a brain aneurysm. Therefore, a large pupil and pain, especially when accompanied by double vision and a droopy eyelid, require an immediate visit to the emergency room.

Coloboma is a congenital condition in which a child is born with missing tissue in and around the eyes. The missing tissue creates gaps in the eye’s structure.

It’s possible for coloboma to affect different parts of the eye, including the optic nerve, the retina, the eyelid and the iris. When the iris is affected, the lower section of the colored part of the eye will be missing and the tail of the tadpole will always point downward. This gap in the iris can make the pupils look elongated, like a cat’s. Coloboma may affect one or both eyes.

Coloboma can also be a symptom of cat eye syndrome — a rare genetic condition where a chromosomal defect results in various deformities.

Miosis is a condition in which a person has very small pupils that stay constricted, even in low-light environments. It may affect one or both eyes, and could be caused by aging, medication or a head injury.

A blown pupil describes a pupil that is largely dilated and does not respond to light. Blown pupils may be present in one or both eyes, and usually occur due to a problem with the brain. For this reason, people with a blown pupil should seek medical attention immediately.

Aniridia is a rare condition in which the iris is partially or completely missing. It can be congenital, meaning it’s present at birth, or it can be acquired.

Congenital aniridia occurs due to a PAX6 gene mutation. This mutation can be passed down from parents, or happen spontaneously. Acquired aniridia can happen as a result of injury or from eye surgery.

People with polycoria have multiple pupils in one eye. There are two types of polycoria: True and false.

In true polycoria, each pupil responds to light independently, meaning each pupil has its own set of muscles that allow it to function. In false polycoria, there is only one functioning pupil. There may be what appear as other pupils, but they are just small holes in the iris. This can be caused by conditions such as Iridocorneal Endothelial (ICE) Syndrome.

Though it’s not confirmed, it’s believed that true polycoria is caused by issues in eye development during gestation.

Experiencing a concussion or traumatic brain injury can affect pupil size and responsiveness. Seek immediate medical attention if your pupils are two different sizes or unresponsive to light after experiencing a head injury.

Inflammation of the iris, called iritis, can cause irritation and swelling around the pupil. Iritis is categorized into two types: Traumatic and non-traumatic.

Traumatic iritis can happen after an eye injury. This can include burns, blunt force trauma, toxic chemical exposure and penetrating injury.

Non-traumatic iritis occurs due to an infectious disease or underlying medical condition. Conditions may include psoriasis, herpes simplex, inflammatory bowel disease, and more.

Benign episodic unilateral mydriasis occurs when one pupil becomes large for between 10 minutes to many hours or longer. The dilated pupil can be accompanied by pain around the eye, sensitivity to light, blurred vision and inability to focus in the affected eye.

Ophthalmoplegic migraine is a disorder of the nerves that move the eyes. It often causes different size pupils, as well as droopy eyelids, double vision and an eye turn, nausea, sensitivity to light, and pain around the eye that lasts for hours to weeks and can come and go.

It is also associated with headaches which can come days to weeks before the weakening of the eye muscles. It is now thought to be an inflammation of the nerve and not a migraine.

If you notice sudden changes in vision or consistent irregularity in pupil shape, it’s best to consult your eye doctor. While tadpole pupil is not dangerous on its own, it often indicates an underlying condition.

Depending on the suspected cause, your eye doctor may refer you to a neuro-ophthalmologist. This is an eye doctor who specializes in eye and vision problems that stem from the brain and nervous system.

Cases of tadpole pupil that are caused by a brain issue can be identified and treated under the care of a neuro-ophthalmologist.

The tadpole pupil. The Journal of the American Medical Association Neurology. April 2017.

Is tadpole pupil in an adolescent girl caused by denervation hypersensitivity?Neuropediatrics. January 2017.

The tadpole pupil: Case series with review of the literature and new considerations. Frontiers in Neurology. August 2019.

FAST signs of stroke… What are the other signs? Heart and Stroke Foundation of Canada. Accessed June 2022.

Miosis. The Manual of Scientific Style. 2009

The tadpole pupil. The Journal of the American Medical Association Neurology. April 2017.