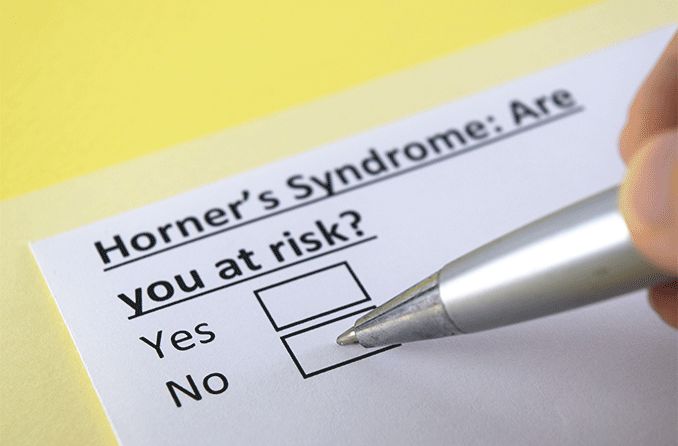 Horner’s syndrome is a rare disorder that affects the eye and nearby tissue on one side of the face. This condition can appear at any point in someone’s life; fewer than 1% of people are born with it. Typically, problems that arise from Horner’s syndrome don’t harm a person’s vision or health.

This disorder affects males and females equally and can happen in any age group, ethnic group or geographic location.

Someone with Horner’s syndrome also may experience sinking of the eye into its cavity (enophthalmos) and a bloodshot eye.

While vision and health normally aren’t harmed by Horner’s syndrome, the nerve damage that triggers this disorder may be a sign of other health problems.

Symptoms that may accompany Horner’s disease, but are not directly caused by it, include:

Horner’s syndrome results from damage to the sympathetic nerves, which regulate dilation of our pupils and raising of our eyelids. Causes may include:

Some cases of Horner syndrome occur for no apparent reason, according to the National Organization for Rare Disorders. In other cases, the disorder may be genetically inherited.

In children, one of the most common causes of Horner’s syndrome is neuroblastoma. Neuroblastoma is a cancer that starts in nerve cells (called neuroblasts) of the sympathetic nervous system.

Horner's syndrome is generally acquired in adulthood. Fewer than 5% of cases of this disorder are classified as congenital Horner’s syndrome. A disease or condition that is present at birth is said to be congenital.

Most cases of congenital Horner’s syndrome result from damage to nerves known as the cervical sympathetics. The cervical sympathetic nerves control several functions in the eye and face such as pupil dilation and facial sweating. These nerves can be damaged as a result of birth difficulties, surgery or accidental injury, as well as benign or cancerous tumors. For some people with congenital Horner’s syndrome, their carotid artery has not developed properly (agenesis).

An eye doctor may be able to confirm Horner’s syndrome with a special eye test. Furthermore, tests may be needed to pinpoint the cause. These tests may include:

The eye doctor will see how the pupils react to the drops. That reaction will determine whether Horner’s syndrome is present. Then, other tests may be required, such as an MRI or CT scan, to figure out what’s causing the disorder.

If a child is diagnosed with Horner’s syndrome, the doctor may order more tests, such as X-rays or urine tests, to find out whether the patient has neuroblastoma or any abnormalities in the abdomen, brain, chest or neck.

Someone who suddenly experiences the following symptoms associated with Horner’s syndrome should seek emergency care:

There is no treatment for Horner’s syndrome. The lingering effect is often a slightly droopy eyelid. That droopiness may be corrected by cosmetic surgery or eye drops.

While there is no treatment for Horner’s syndrome itself, the underlying cause can be treated.

While Horner’s syndrome itself “will not damage the eye or cause loss of vision, it could be a signal of damage to one of the structures along the nerve. It is important to find out where the damage is and what is causing it because sometimes it can be serious,” according to Manchester University’s Royal Eye Hospital.

Addressing the underlying cause may help alleviate symptoms of Horner’s syndrome, including discomfort and reduced nerve function.

Regardless of whether you’re coping with Horner’s syndrome or another eye condition, or even if there are no obvious problems with your eyes, it’s important to visit your optometrist or ophthalmologist to undergo regular eye exams.

READ NEXT: Rare eye diseases: What causes them, and how are they treated?