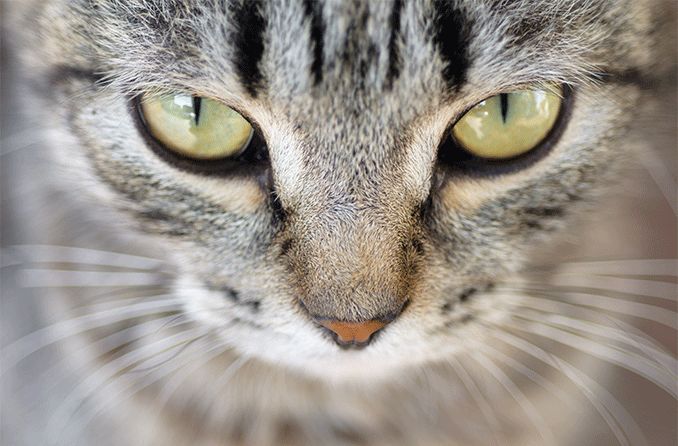 Cats are different from humans in many ways: They have four legs, are covered in fur and use their tongues to clean themselves. But when it comes to how we see the world around us, how dissimilar is a domestic cat’s view from a human’s?

While the structure of the eyes is pretty similar between cats and humans, there are a few key differences that affect how a cat’s eyes look and function.

One of the main differences between a human eye and a cat eye? Domestic cats and smaller wildcat species have a third internal eyelid called the palpebra tertia or nictitating membrane. This is made up of tissue folds that are covered in a unique mucous membrane (conjunctiva) that rests behind the outer eyelid and in front of the cornea.

While the third eyelid is barely visible when a cat is alert and its eyes are completely open, it will naturally begin to close over the eye when a cat sleeps or blinks, increasing its visibility from the outside.

Another key difference between the human eye and a cat’s eye is pupil shape. Cats have an elliptical pupil, which is characterized by horizontal slits rather than the perfect circles that make up human pupils.

The signature “cat eye” pupil is associated with predators that are close to the ground, including your house cat and small wildcats, and thought to be related to their preferred hunting method. (By contrast, big cats such as lions and tigers who have a height advantage over their domestic cousins, have round pupils like humans and dogs.)

Cats are known as ambush predators who use stealth to capture prey because they don’t have speed or height.

They will sit and wait for the perfect moment to pounce on their prey and their vertically oriented pupils assist with this. Vertical pupils help smaller cats gauge distance without moving their heads, which could potentially notify prey of their presence.

SEE RELATED: Eye discharge in cats and 5 reasons your cat’s eyes may be watering

Because a cat’s eyes are anatomically different from a person’s eyes, the visual outcomes are also different. So, how does cat vision measure up to human vision?

Below are a few characteristics of eyesight and how cats and humans compare.

Differences between human vision and cat vision can be traced to the retina. Within the retina are photoreceptors called rods and cones. Rods provide peripheral vision and night vision, while cones help us perceive color and daytime vision.

The human retina has a high concentration of three types of cones which allow us to see hues of red, blue and green — a characteristic that labels humans as “ trichromats.”

Domestic cats and small wildcats are also trichromats, but have a lower concentration of cones. This makes a cat’s perception of color similar to that of a human with color blindness. That is, they may see greens and reds accurately, while shades of blue appear to be more gray or green.

Where cats fall short in terms of the amount of cones in the retina, they make up for in rods. Cats have a much higher concentration of rods than humans do, which gives them a wider visual field and far better nighttime vision than humans.

Though cats have a wider field of view and can detect motion better than we can, their central visual acuity isn’t very impressive.

In fact, if you could give a cat an eye exam, the smallest letters it would see on an eye chart would be the 20/100 line, according to LiveScience.com. That’s five times worse than 20/20!

To put this into perspective, that’s just one line better than what’s considered legal blindness in humans. So, while cats are known to be particularly agile and excellent hunters, their vision is far from sharp.

As mentioned above, cats have poor visual acuity, which means their distance vision is very blurry. Felines are able to see more clearly when objects are near them, but not close to them.

The eyes of a domestic cat are extremely large in proportion to the rest of their skull, which makes it difficult for them to focus on things closer than 12 inches from them. Instead, they use their whiskers to feel around and determine what it is they can’t see.

When it comes to the people they love, cats are able to recognize people based on their face, smell, voice and behavioral patterns. In fact, they rely on these factors so heavily that changing your scent, voice or behavior may cause them anxiety.

Do cats have night vision?

It's a popular belief that cat night vision is a “thing.” While it is true that cats are able to see more clearly at night than humans, they don’t necessarily have night vision.

This is because cats cannot see clearly in complete darkness — they require at least some level of light. However, they only need about 17% of the amount of light that humans require in order to see clearly at nighttime.

A cat’s ability to do this comes from the abundance of rods they have in their retinas. Rods help with peripheral vision and night vision, which is where a cat’s eyesight excels.

Another structure in a cat’s eye that improves nighttime vision is called tapetum. Tapetum is a reflective layer of tissue in the choroid that works as a mirror to reflect incoming light, so it passes through the photoreceptors twice. This gives the photoreceptors a chance to soak up what very little light is coming in.

Because of the tapetum’s reflective nature, it’s common for a cat's eyes to glow in low-light conditions or in photographs. It often appears as a green, iridescent gleam in both eyes.

READ MORE: How animals see the world or How good is a dog’s vision?

5 reasons your cat’s eyes may be watering

What eye drops are used for dogs?