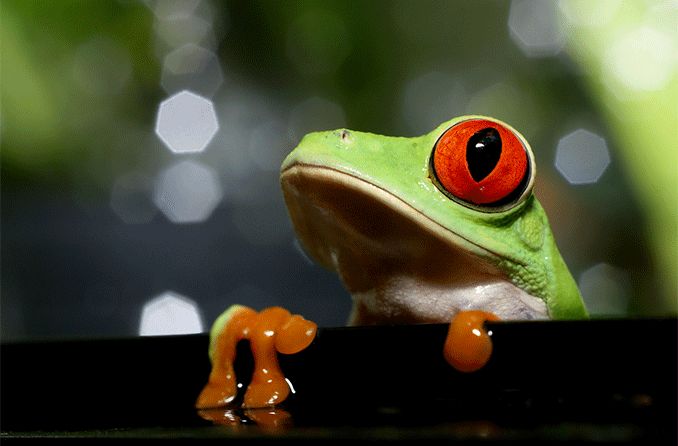 How do animals see the world? The animals we know — dogs and cats, parakeets and penguins — respond to light and use vision to find food... and avoid becoming food.

But what are they seeing that we aren’t? Scientists have a few things figured out. They’ve studied the structure of animal eyes. They’ve documented light-sensitive cells. And they’ve discovered the shades of colors animals see.

The trouble is, animal eyes and brains are so much different than ours. And they can’t exactly tell us how their world looks.

Even so, scientific studies on animal eyesight have turned up some amazing facts, such as:

Read on to discover some of the coolest ways animals view a world we’ll never see.

Animal eyesight is made up of two primary components:

Humans see a slice of the EM spectrum (known as visible light) that goes from red to yellow to blue to purple. Some animals may see other parts of the spectrum including infrared (IR) and ultraviolet (UV), which helps them perceive all sorts of things that are invisible to humans.

Not all animals that see have all of these mechanisms. The box jellyfish has eyes but no brain. Insects, by contrast, don’t see one thing: They see many things because their eyes have multiple lenses called facets. Honey Bee eyes, for example, have thousands of lenses.

Animals have a wide array of specialized sensory capabilities beyond vision. Bats and whales, for instance, navigate via echolocation. Echolocation creates sounds that bounce off nearby objects. This helps the animals avoid crashing into things.

For this article, however, let’s stick to animals’ visual perception. Although, as you’ll see, infrared perception confuses things a bit.

The most common sources of vision that animals see but humans cannot are UV and IR.

UV waves trouble people in all sorts of ways, from sunburn to skin cancer. But we don’t see UV waves because our eyes’ lenses filter them out.

Other creatures, great and small, are less fortunate. For instance, when we look at a power line, we don’t see more than a long cable. And we simply know it is carrying electrons to their destination.

Some animals, however, see bright, flashing lights that scare them away. This is why reindeer avoid power lines in their Arctic playgrounds.

What’s going on? Powerlines that are improperly shielded give off a corona discharge that may, from time to time, look like a burst of light to animals that perceive UV.

It’s not all bad news for animals like reindeer: Their UV perception also helps them find their favorite food (lichen) and detect the urine of predators. It also helps keep them away from dangerous power lines.

UV perception helps a wide range of species, it turns out. Bees rely on UV perception to track lines on flower petals that point directly toward their prized nectar. Female birds use UV to scrutinize male birds’ plumage. Those with the most appealing color combinations win the race to reproduce.

And a few creatures experience light in many ways beyond IR and UV.

Butterflies may have a half-dozen or more kinds of photoreceptors. The mantis shrimp has up to 16 separate photoreceptors, each one doing a different visual task (including polarization, just like the high-quality sunglasses people wear.)

Anything warm emits waves of infrared energy. Some infrared waves are visible to humans (think fireworks and explosions in action movies). The rest of the IR waves flow outside our visual spectrum.

But some animals, like snakes, frogs, bees and a few species of fish, can detect infrared waves in their environment. Then there’s the pesky mosquito: Its IR perception detects areas of the body where the blood flows closest to the skin (more warmth at the surface means more blood).

Thus, a thermal imaging camera that detects infrared light gives us an idea of what the mosquito sees.

Note that IR perception is a way of “seeing” but it doesn’t always fit the human definition of sight. Some snake species, for instance, have sense organs in their noses that detect warmth-emitting infrared rays coming from prey like mice and other rodents.

Animals even see the passing of time differently than we do. Researchers found that exposing animals to light flashing at different rates revealed how they perceive time.

Small animals with rapid reaction times (ideal for finding prey and escaping predators) and fast metabolisms sensed time passing more slowly than it did for other animals.

In effect, these animals see the world in slow motion. Imagine a video shot in extreme slow-mo to reveal a bullet passing through an apple.

The experiment was limited to 32 vertebrates, so there’s no telling how widespread this effect is across millions of animal species.

The millions of animal species on Earth have powers of perception beyond our imagination. And it’s not just UV vision and echolocation. Migrating birds, for instance, may track subtle differences in the planet’s magnetic field to guide them along their travels.

As scientists find new and ingenious methods of studying what animals see, we’ll develop a better idea of how animals see the world. But unless animals learn to tell us what they see in a language we can understand, there will always be an element of mystery to the vision of the animal kingdom.

How do you know if an animal can see color? Ask a Biologist. Accessed October 2021.

Evolution of sight in the animal kingdom. Webvision, University of Utah. July 2014.

Blind as a bat? The genetic basis of echolocation in bats and whales. Genome Biology and Evolution. January 2020.

Power lines look like terrifying bursts of light to animals. NOVA Next. March 2014.

Inside the colourful world of animal vision. The Conversation. November 2014.

The eyes and vision of butterflies. Journal of Physiology. August 2017.

Mantis shrimp have the world’s best eyes — but why? Phys.org. September 2013.

What animals can sense that humans can’t. Discover. May 2021.

What is the third eyelid in cats?