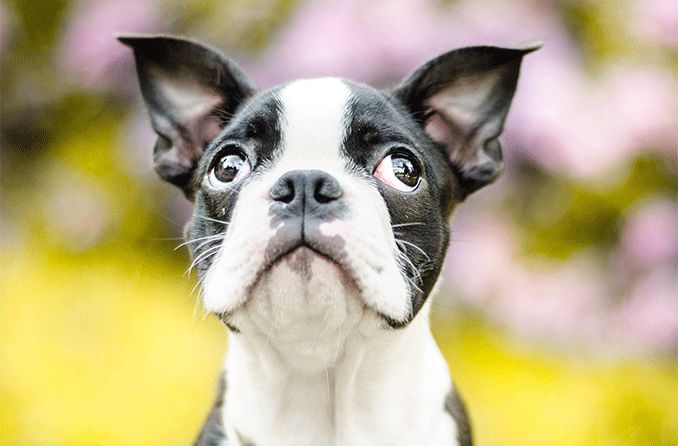 Your dog’s gaze darts from a brown squirrel to a red bird. And then back to the squirrel. Then, to a yellow tennis ball, sitting in green grass under a blue sky.

This scene looks brilliantly vibrant to your eyes, but can dogs see color like you do? How well do your pups see the world around them?

Dog vision, like eyesight in many animals, has advantages and disadvantages. What their vision lacks in some areas, it makes up for in others.

Knowing more about how dog vision measures up to human vision can help you better understand exactly what dogs see.

How a forest scene would look to a human (top), compared to how it might look to a dog (bottom).

Dogs are technically color blind, at least in human terms. But being color blind doesn’t mean they only see in black and white.

Like most colorblind people, dogs can still see some colors.

Dogs can see the colors yellow and blue, as well as some shades in between. They can also see shades of violet and gray.

What dogs see is similar to how the world looks to a person with red-green color blindness, the most common grouping of color vision deficiency in people.

Online tools such as this image processor let you find out how one of your own photos would look through a dog’s eyes.

Why dogs only see certain colors

A dog’s eyes see different colors than human eyes do, thanks to millions of microscopic cells called cones.

Cones are stationed along the retina, the thin membrane in the back of each eye. Cones have two specialties: color and fine detail.

When light strikes cone cells, they activate and send signals to the brain.

There are a couple of big differences between these cells in dogs and people:

The blue and yellow cones in a dog’s eyes allow it to see about 10,000 different combinations of color. The average human’s red, green and blue cones may be able to process up to 10 million combined colors.

Humans may have a leg up on daytime color vision, but dogs have people beat in the night vision department.

Remember the microscopic cone cells that help dogs see certain colors? The other type of light-sensitive cells in the retina are called rods. They handle low-light vision instead.

There are two big reasons why dogs can see in the dark:

While some light is absorbed on the first pass through the retina, the tapetum lucidum's shiny coating reflects more light back toward the retina. This is why you see a blue-green reflection glowing in your pet's eyes at night, or in flash photos.

This "second chance" at absorbing light allows a dog's eyes to take in more light in the dark, and gives them better overall night vision.

From a distance of 10 feet, a human with normal vision can read every letter on all 9 lines. A dog would probably only be able to read as far as lines 3, 4 or 5.

Visual acuity is the measure of how well objects appear in focus. In humans, eye doctors often use a Snellen eye chart to determine visual acuity.

20/20 vision — the standard for normal eyesight — means that you can read certain letters on the eye chart from a distance of about 20 feet (in the United States).

The higher the second number is, the blurrier the vision. 20/40 is the lower limit for getting a driver’s license, while 20/200 is classified as legal blindness.

A German study on a poodle determined that it had about 20/75 vision. Another study on whippets found slightly better 20/50 vision.

One reason dogs have less detailed vision is because they don’t have a fovea inside their eyes like humans do. The fovea is a small notch in the human retina that’s packed with millions of sharpness-boosting cone cells.

Dog vision might not be all that sharp, but there’s a reason ol’ Blue can still spot a rabbit on the other side of the road — dogs have developed and adapted to their senses over thousands of years.

Where people rely on finer details, dogs rely on general shapes and movement.

Dogs make the most of their senses

So the squirrel, bird, tennis ball, grass and sky from before don’t look quite as sharp or vibrant to your canine friends — but at least they’re a little colorful, right?

As strange as it may seem, limited color vision and less visual sharpness have proven to be a better fit for dogs from an evolutionary standpoint. Eyesight is an amazing sense, but human vision has its limits too.

So don’t feel sad for your loyal companion. A dog’s vision might seem limited, but it’s the only eyesight they’ve ever known and it feels completely natural to them.

Besides, if your dogs knew how much better their night vision, smell and hearing were, they might be the ones feeling bad for you.

READ NEXT: How animals see the world or How good is a cat’s vision?

What eye drops are used for dogs?

5 reasons your cat’s eyes may be watering

Can dogs get pink eye?