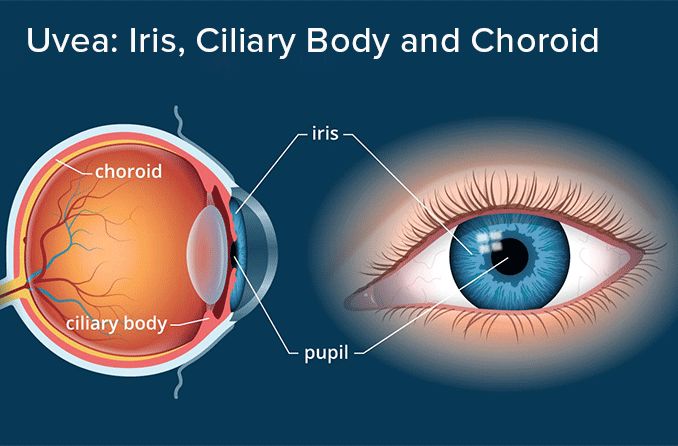 No, the uvea is not that little lobe of tissue that dangles from the back of your mouth when your doctor tells you to open wide and say “Ahh!“ That’s your uvula.

Here are the key things you should know about the uvea of your eye.

The uvea is the pigmented middle layer of the eyeball. It has three segments: the iris, the ciliary body and the choroid.

Iris: The iris of the eye is the thin, circular structure made of connective tissue and muscle that surrounds the pupil. The colour of our eyes is determined by the amount of pigment in the iris. [Learn more about eye color.]

Ciliary body: The second part of the uvea is the ciliary body. It surrounds the iris and cannot be seen because it's located behind the opaque sclera (white of the eye).

Choroid: The posterior portion of the uvea is the choroid, which is sandwiched between the tough outer sclera of the eyeball and the retina in the back of the eye.

Each component of the uvea has a specific function:

Iris: In addition to giving the eye its colour, the iris acts like the diaphragm of a camera and controls the size of the pupil. One muscle within the iris constricts the pupil in bright light (full sunlight, for example), and another iris muscle dilates (enlarges) the pupil in dim lighting and in the dark.

Ciliary body: The ciliary body holds the lens of the eye in place. It is connected to the lens with a network of many tiny ligaments (called ciliary zonules or zonules of Zinn) that suspend the lens in place behind the pupil. The ciliary body also secretes the clear aqueous fluid that fills the space in the anterior segment of the eye between the cornea and the iris and lens, and it contains the muscle that controls accommodation of the eye.

Choroid: The posterior portion of the uvea — the choroid — contains many tiny blood vessels and has the vital role of nourishing the retina. [See eye anatomy illustration.]

A number of things can go wrong with the uvea. Some uvea problems are genetic, while others are age-related conditions or are associated with other health problems.

Here’s a short list of conditions and diseases of the uvea:

Uveitis: This is inflammation of the uvea. When confined to the iris, it’s called iritis. If the inflammation affects the iris and the ciliary body, it’s called anterior uveitis or iridocyclitis. There are many potential causes of uveitis, but often the cause cannot be determined. Symptoms include a painful red eye, sensitivity to light and decreased visual acuity. [Read more about uveitis and iritis.]

Synechia: This is when parts of the iris adhere to the back surface of the cornea or the front of the lens. Synechiae (plural) can occur because of trauma to the eye, iritis or other causes. Synechiae are dangerous because they can lead to certain types of glaucoma.

Iris coloboma: This is a congenital disorder in which a portion of normal iris tissue is missing, causing a misshapen "keyhole" or "cat-eye" appearance to the pupil. In some cases, iris colobomas can cause blurred vision, decreased visual acuity, double vision and ghost images. Often, people with iris colobomas choose to wear prosthetic contact lenses to improve the appearance of the eye and decrease any visual symptoms.

Uveal melanoma: This is a cancerous growth within the iris, ciliary body or choroid. If the growth occurs in posterior uvea, it’s called a choroidal melanoma; if in the iris, it’s called an iris melanoma. The tumors are called melanomas because they develop in pigment cells (melanocytes) located within the uvea. Uveal melanomas are the most common type of cancer inside the eye, and the tumors can metastasize to other parts of the body. There are treatment options, but in some cases, removal of the affected eye (enucleation) may be necessary. [Read more about enucleation and prosthetic eyes.]

Choroidal naevus: A choroidal naevus is a flat, benign pigmented freckle in the choroid. If a choroidal naevus is detected during a comprehensive eye exam, your eye care professional typically will take a photograph or other type of image of the interior of your eye to document the shape and size of the freckle and monitor it over time to insure no changes occur.

Choroideremia: This is a hereditary, progressive degeneration of the choroid that primarily affects men. Choroideremia is characterised by night blindness, decreased visual field and (eventually) blindness.

Iris naevus: This is a freckle (localised concentration of pigment) in the iris of the eye. Like freckles on your skin, iris naevi (plural of naevus) almost always are stable and harmless. However, if you have an eye freckle that appears to be getting larger, see your eye care professional immediately. In rare cases, an iris naevus can transform into a malignant growth.

Many uvea problems can be detected by your eye care professional before you notice any significant symptoms.

Routine eye exams are essential to examine your eyes for signs of uveal melanoma and other serious eye conditions so treatment can begin as soon as possible to protect your eyesight.

HAVEN’T HAD AN EYE EXAM RECENTLY? Find an eye care professional near you.