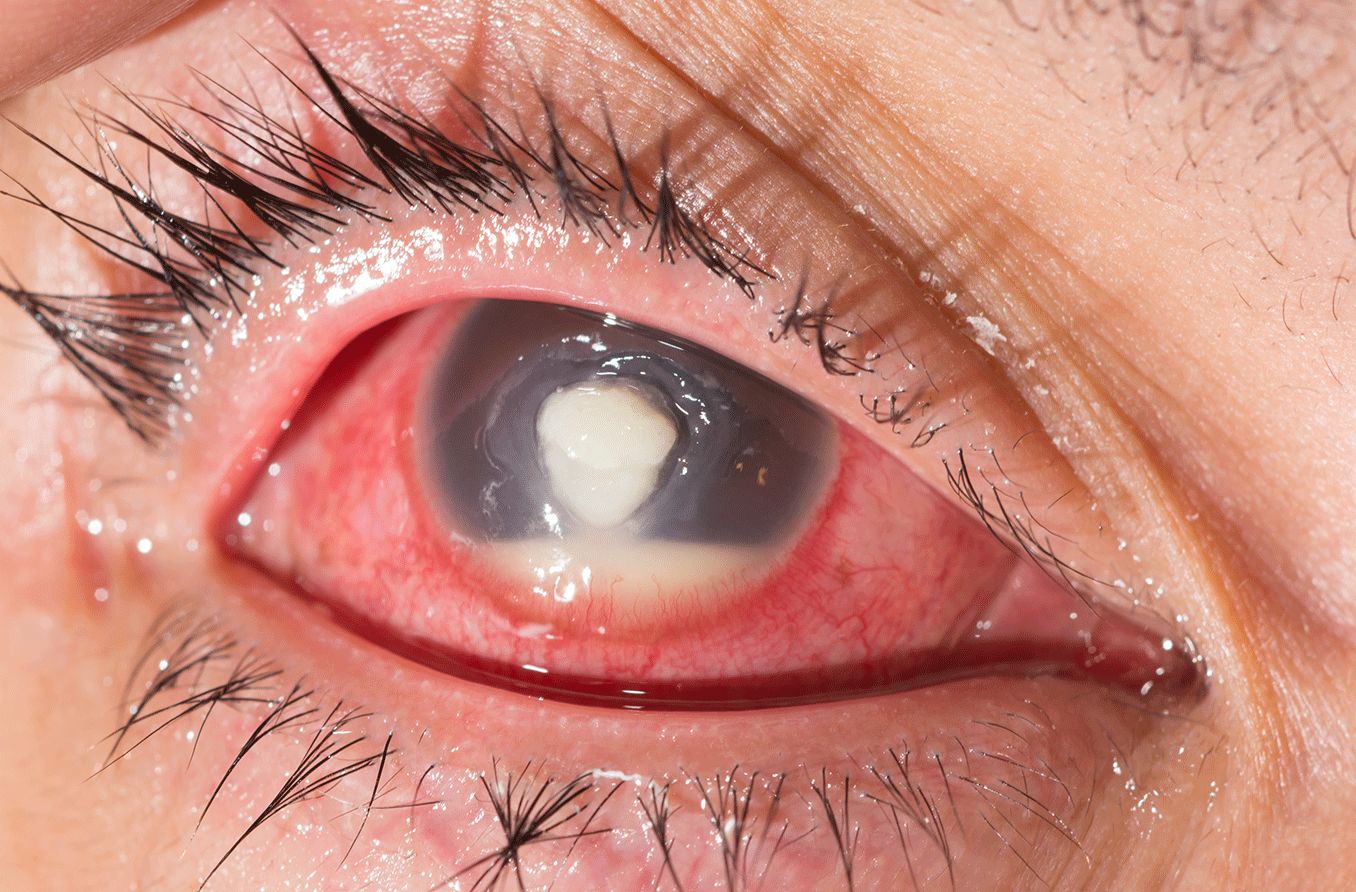 What is a hypopyon?

A hypopyon (hye-POE-pee-on) is the accumulation of white blood cells that form a whitish layer of fluid in the lower portion of the eye's anterior chamber (front part). It indicates severe inflammation or infection and is often visible without magnification. A hypopyon requires urgent evaluation.

A hypopyon can be caused by a wide range of ailments that can require different types of treatment. To understand and diagnose the specific cause, a thorough patient medical history and examination is required. The conditions that can cause hypopyon can be vision-threatening or even life-threatening and include:

The presence of a hypopyon is often associated with Behçet's disease. Also known as Behçet's syndrome, this is a rare condition that leads to the inflammation of the blood vessels and tissues throughout the body. This can lead to symptoms such as eye pain, blurred vision, headaches, ulcers and painful swollen joints.

Although Behçet's disease is commonly associated with hypopyon, HLA-B27-associated acute anterior uveitis is the leading cause of hypopyon in North America.

Someone who tests positive for the HLA-B27 protein is at higher risk for developing certain immune disorders, such as arthritis and acute anterior uveitis.

About half of acute anterior uveitis cases are associated with HLA-B27. A hypopyon is seen in about 14% of these cases. A doctor will likely test for the presence of the HLA-B27 protein if an individual presents with anterior uveitis with hypopyon.

Endophthalmitis is an emergency condition in which the tissues inside the eye become severely inflamed. Hypopyon formation is present in roughly 85% of cases of acute endophthalmitis. It is typically due to a bacterial or fungal infection within the eye and can lead to vision loss if left untreated.

A corneal ulcer is an open sore in the outermost layer of the clear, dome-shaped part of the eye called the cornea. It is usually caused by a bacterial, fungal or viral infection. It can also be caused by conditions such as severe dry eye or an eye injury. A hypopyon can present with a corneal ulcer.

Although rare, complications from untreated syphilis can lead to the formation of a hypopyon.

READ MORE: Ocular syphilis: When syphilis spreads to the eyes

The symptoms that often accompany the formation of a hypopyon are usually the same symptoms that stem from the underlying cause of the inflammation. These can include:

Treatment of the underlying cause of a hypopyon is usually sufficient when it comes to treating and eliminating the hypopyon itself. Your doctor may use one or more of these treatments in order to address the underlying inflammation that has caused a hypopyon to form:

Since the presence of a hypopyon is due to an underlying eye infection or other medical condition, significant risk factors for developing a hypopyon are similar to the potential causes of the underlying condition itself. But one major risk factor is HLA-B27 positivity.

Oftentimes when a patient is experiencing joint pain, stiffness and swelling, a doctor may perform a HLA-B27 blood test. This is to determine whether this specific protein is present on the surface of the patient’s white blood cells. A positive HLA-B27 test result along with the presence of anterior uveitis increases the likelihood that a patient will develop a hypopyon.

Other common risk factors include:

There are many reasons why a hypopyon may form in your eye, and some are more serious than others. A hypopyon can be associated with a variety of infections and conditions that range from relatively benign to life-threatening. For these reasons, you should always consult an eye doctor if you suspect you have a hypopyon, or if there’s an elevated risk you may develop one.

Don’t try to self-diagnose your condition. Your eye doctor may be able to treat the underlying cause of a hypopyon themselves, or they may decide to refer you to a specialist if the hypopyon requires extra care and attention.

Hypopyon: Is it infective or noninfective? Ocular Immunology and Inflammation. May 2021.

Hypopyon. Journal of Education and Teaching in Emergency Medicine. December 2018.

Endophthalmitis. American Academy of Ophthalmology. May 2022.

Eye pain: Causes of pain in, around, or behind your eyes and treatment options