What is anterior uveitis and what causes it? 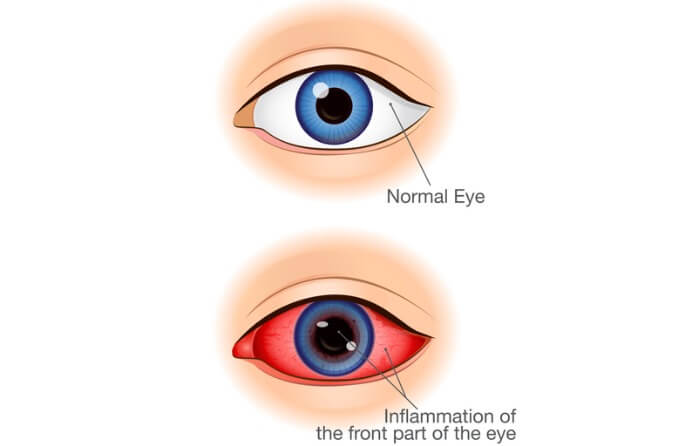 What is anterior uveitis?

Anterior uveitis, or iritis, is inflammation of the iris (the colored part of the eye) and the front portion of the ciliary body. Anterior uveitis is the most common and least serious of the uveitis types. Pain, redness, blurry vision and light sensitivity are common symptoms.

What part of the eye does anterior uveitis affect?

Anterior uveitis is inflammation of the iris or ciliary body, both of which are located in the front (anterior) part of the uvea. The uvea is the middle layer of the eyeball wall. It is sandwiched between the sclera — the white layer of the eye that surrounds most of the outer eyeball — and the retina — the light-sensitive layer located at the back of the eye.

The uvea is the vascular layer, which means that it is flush with blood vessels that provide nutrition and oxygen to surrounding structures. When the uvea becomes inflamed, these blood vessels leak white blood cells and protein, which your doctor can see during an eye exam.

The uvea is made of three main structures:

How is anterior uveitis different from other types of uveitis?

The four different types of uveitis are named according to which portion of the uvea is inflamed, from the front of the eye to the back:

In many cases, the underlying cause of an episode of anterior uveitis is unknown. However, several factors are associated with this condition.

Approximately half of sudden-onset (acute) anterior uveitis cases are associated with the Human Leukocyte Antigen B27 (HLA-B27) allele. If your doctor determines that you have acute anterior uveitis, they may recommend a special blood test that looks for the HLA-B27 protein on the surface of white blood cells.

If your test results are positive for the HLA-B27 protein, it means that you are at higher risk for certain conditions. This includes inflammatory conditions such as:

Other underlying causes of anterior uveitis include:

Some studies have found that smokers are at a higher risk of developing uveitis than non-smokers.

If your doctor confirms that you have anterior uveitis, a thorough medical history will be taken and a comprehensive eye exam, additional exams and blood tests may be performed to screen for an underlying cause.

What are the symptoms of anterior uveitis?

Anterior uveitis usually affects only one eye, although both eyes can be affected. The symptoms of anterior uveitis are similar to other common eye conditions, and a comprehensive eye exam is necessary to confirm the diagnosis.

Symptoms can begin suddenly (within hours) or gradually (over days) and include:

These symptoms can last for a short time, or they may last for longer periods and continue to recur in severe cases.

Can anterior uveitis cause other eye problems?

Anterior uveitis is not only painful, but it may also lead to other eye problems if left untreated. Damage to the inflamed structures of the eye can occur after a prolonged case of anterior uveitis. In addition, there is an increased risk of developing glaucoma if this condition is left untreated.

What is the treatment for anterior uveitis?

Anterior uveitis is usually treated with two different medications: one to decrease inflammation and one to relieve pain.

Inflammation is treated with corticosteroids. In most cases of anterior uveitis, the steroids can be taken as eye drops. In some cases, your doctor may prescribe steroids that are taken by mouth or given as an injection into or around the eye.

Pain is treated with drops that dilate and relax the pupil, although this may increase light sensitivity.

In severe cases, drugs that suppress the immune system may be prescribed.

If anterior uveitis is caused by an underlying condition, treating that condition will help to decrease inflammation and future recurrence.

Can cats and dogs have uveitis?

Pets can develop uveitis. The mechanism is the same in cats and dogs as in humans. If you notice that your pet has any of the following signs, contact your veterinarian:

When should I see a doctor?

If you are experiencing pain, blurry vision or eye discomfort, contact your eye doctor as soon as possible. Only a doctor can confirm whether your symptoms are caused by anterior uveitis or another condition.

If you have been diagnosed with anterior uveitis, following the recommended schedule for taking medications prescribed to you is important. Taking corticosteroids for too short or too long a time can result in further complications in the eye. It is advised that you taper the steroids according to your doctor’s directions to decrease the risk of a recurrence of anterior uveitis.

The multifunctional choroid. Progress in Retinal and Eye Research. March 2010.

The uveitis and HLA-B27 connection. Review of Optometry. January 2016.

Eye pain: Causes of pain in, around, or behind your eyes and treatment options