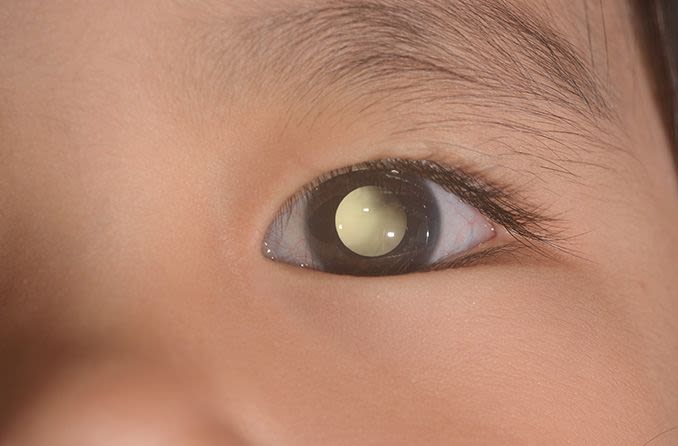 Leukocoria occurs when a pupil shines white rather than red when light reflects off of it. The name comes from the Greek words leukos (meaning “white”) and kore (meaning “pupil”). This condition is also sometimes referred to as “cat’s eye pupil.”

Most of the conditions associated with leukocoria are serious. It is important to seek medical attention when this abnormality occurs.

What is a red reflex versus a white reflex?

The retina is a layer of tissue at the back of the eye. It is responsible for taking the light and images that come through the eye’s lens and sending them to the brain. The blood vessels inside as well as right behind the retina cause it to appear orange or red.

When light shines on a healthy pupil, it often reflects red. This is because the light that isn’t absorbed by the retina bounces back with the color of the retina itself. This is known as the “red reflex.” A common example of this reflex is the occurrence of red eyes in a photograph.

When something blocks the retina or causes an abnormal reflection, the light is either absent or reflects white. This “white reflex” can also be noticeable in photographs. However, the use of red eye removal software may make it difficult to recognize. It is important to seek an evaluation from an eye doctor if a white reflex is present.

Leukocoria is a common symptom in several conditions. These include (but may not be limited to):

Retinoblastoma is a type of cancer that develops in the retina. It typically develops in childhood and can affect one or both eyes. It is rare but treatable. Leukocoria is one of the first signs that a child may have retinoblastoma.

Other symptoms include crossed or turned out (strabismus) eyes, red/inflamed eyes, poor vision and a change in iris color.

Coats’ disease occurs when the blood vessels that bring blood and oxygen to the eyes leak fluid. This causes a buildup of fatty fluid in the retina. If enough fluid gathers, it can lead to retinal detachment and vision loss.

This condition is most commonly found in males. Common signs of Coats’ disease, alongside leukocoria, are strabismus and vision loss.

Cataracts or cloudy lenses can prevent light from reaching the retina. They can impact vision clarity and, in some cases, cause blindness.

Pediatric cataracts can be congenital (present at birth) or acquired (developed after birth). They can be present in one or both eyes and may differ in severity. Pediatric cataracts are often discovered by pediatricians during regular check-ups. Parents may also notice them because of the presence of leukocoria.

Many of the nerve fibers in our body have a white covering made of myelin.  The optic nerve that connects the eye to the brain has fibers covered with myelin as well.  As these fibers enter the eye they form the retina which contains photoreceptors that sense light.  Myelin will block light and because of this the retina develops without a myelin layer.  In some cases the retina develops with the myelin layer still on it.  This is called myelinated (or medullated) retinal nerve fiber layer. The myelin covered area of the retina is usually small, but in some cases large enough to cause leukocoria and vision loss.

Retinochoroidal coloboma is another disorder of eye development caused by the incomplete formation of some parts of the eyeball before birth. Parts that may be missing are the layer behind the retina (choroid) and the retina, the optic nerve, and the iris.

Large colobomas can cause leukocoria as well as a shrunken eyeball (microphthalmia), tadpole pupil and vision loss.

Retinopathy of prematurity is a disease that impacts infants born prematurely. ROP occurs when the blood vessels of the retina are unable to fully form before birth. Some babies develop mild cases that go away on their own. Others may have more severe issues that require treatment in order to prevent blindness.

Persistent fetal vasculature is a congenital (present at birth) eye disorder. As an infant develops during pregnancy, their eyes are fed by embryonic blood vessels. Once the eyes have fully developed, these blood vessels should wither away.

In infants with PFV, the blood vessels don’t fully go away. Mild forms of PFV are somewhat common. But in rare cases, more severe forms may be present.

Signs of PFV usually show up within a few weeks of birth. These include leukocoria, strabismus and one eye being smaller than the other.

Ocular toxocariasis typically only affects one eye and is most common in children between the ages of 2 and 10. Leukocoria is a symptom of a later stage of the disease.

Ocular toxoplasmosis is much more common. It is caused by the parasite Toxoplasma gondii, frequently found in cats. It can be passed from an infected mother to a child during pregnancy or acquired later in life. People can contract the parasite through undercooked or raw foods, or infected litter boxes and sandboxes.

When Toxoplasma gondii attacks the retina, it ruptures cells, creating inflammation and scars. This can cause blurred vision and, if left untreated, blindness. Because the inflammation usually appears white, leukocoria can be a sign of ocular toxoplasmosis.

Both ocular toxoplasmosis and toxocariasis as well as many other less common eye conditions can cause uveitis. Uveitis is inflammation of the layers on the inside of the eye that can cause leukocoria.

FEVR is a hereditary condition that prevents blood vessels from forming around the retina. The decrease in blood supply can lead to vision loss, retinal detachment, strabismus and leukocoria.

Medulloepithelioma is a tumor that develops in the front of the retina. This area of the retina is called the nonpigmented ciliary epithelium.

These tumors grow slowly. Affected individuals may not be aware of the issue until it has grown large enough to be seen by a clinician or has started to cause secondary symptoms. These symptoms can include vision loss, eye pressure, eye redness and leukocoria.

Astrocytic hamartoma is a retinal tumor made up of glial cells (part of the brain, optic nerve and retina). This condition is common with tuberous sclerosis, a genetic disease that also causes tumors in other parts of the body, several brain disorders as well as small red freckles on the face called angiofibromas.

When large enough, astrocytic hamartoma can cause vision loss and leukocoria.

Norrie disease is a disorder that causes blindness in male infants. It is hereditary. This disease impedes the development of the retina, leading to a buildup of underdeveloped retinal cells. This buildup is responsible for the presence of leukocoria.

Other symptoms can include shrinking of the irises and development of cataracts. Hearing loss, delays in motor skill development and intellectual disabilities may also occur.

How is leukocoria detected?

Frequently, leukocoria is detected by a friend or loved one. They may notice that the child’s pupil appears white in certain lighting or shines white rather than red in a photograph. An eye doctor or pediatrician may also notice the condition.

A child’s light reflex will be checked during pediatric exams until the child is three. Yearly vision screenings will also involve a look at the light reflex.

An ophthalmologist or optometrist can use eye drops to dilate the patient’s pupils to help with the exam. They may then use an ophthalmoscope, a tool with a light and several lenses, to examine the back of the eye.

How is leukocoria treated?

Treatment for leukocoria is based on the underlying condition. Rather than treating leukocoria itself, the condition causing it will be addressed.

When should you see a doctor?

The American Academy of Pediatrics encourages a light reflex test for every infant within their first two months of life. In addition to regular eye exams, if a friend or loved one notices that a child’s pupil appears white, it is important to seek an immediate evaluation. This will help providers determine what, if any, related conditions are present.

Clinical features and treatment of ocular toxoplasmosis. The Korean Journal of Parasitology. August 2013.

A stepwise approach to leukocoria. American Academy of Ophthalmology. July 2016.