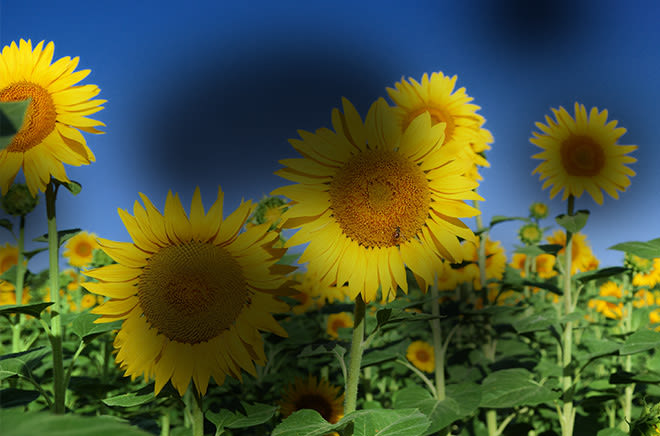 Diabetic retinopathy — vision-threatening damage to the retina of the eye caused by diabetes — is the leading cause of blindness among working-age Americans.

The good news: Diabetic retinopathy can often be prevented with early detection, proper management of your diabetes and routine eye exams performed by your optometrist or ophthalmologist.

According to the International Diabetes Federation (IDF), the United States has the highest rate of diabetes among 38 developed nations, with approximately 30 million Americans — roughly 11% of the U.S. population between the ages of 20 and 79 — having the disease.

About 90% of Americans with diabetes have Type 2 diabetes, which develops when the body fails to produce enough insulin — a hormone secreted by the pancreas that enables dietary sugar to enter the cells of the body — or the body becomes resistant to insulin. This causes glucose (sugar) levels in the bloodstream to rise and can eventually damage the eyes, kidneys, nerves or heart, according to the American Diabetes Association (ADA).

Between 12,000 and 24,000 new cases of blindness from diabetic retinopathy occur in the U.S. each year, according to CDC, and many could be prevented with early intervention. But a significant percentage of Americans with diabetes are not aware of their risk of vision impairment from the disease.

In fact, according to a survey conducted by Everyday Health, less than half of adults with diabetes in the U.S. recognize their risk for vision loss.

The survey results also showed that only 18% of respondents were familiar with diabetic macular edema (DME), a term that refers to swelling of the macula associated with diabetic retinopathy, and nearly one third (30%) of respondents said they don’t get annual dilated eye exams recommended by the National Eye Institute for people with diabetes, which could help protect against diabetes-related vision loss.

People who are most vulnerable to diabetic retinopathy, including the elderly and certain minorities, may not receive appropriate eye care because of lack of health insurance or access even to primary care physicians.

For these reasons, make sure you promptly advocate for your own eye health and that of affected family members or friends when any kind of diabetes is present.

With any diagnosis of diabetes, your primary care physician should refer you to an eye doctor (optometrist or ophthalmologist) for a dilated eye exam at least once a year.

Uncontrolled diabetes allows unusually high levels of blood sugar (hyperglycemia) to accumulate in blood vessels, causing damage that hampers or alters blood flow to your body’s organs — including your eyes.

You may first notice diabetic retinopathy (DR) or other eye problems, including macular edema, related to diabetes if you experience symptoms such as: 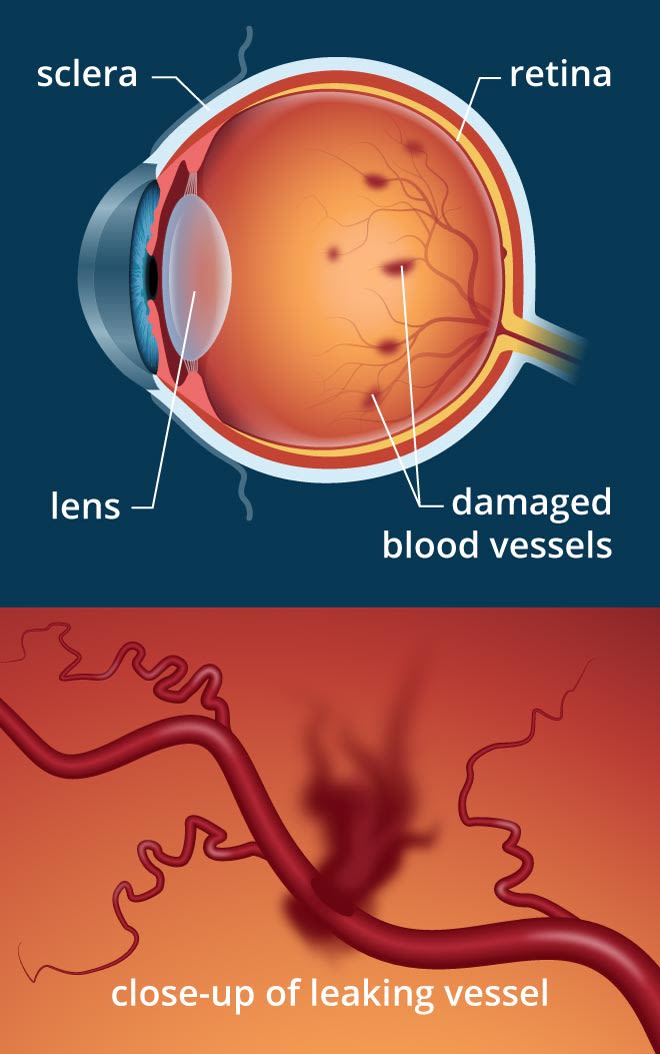 Among other problems, diabetes can damage blood vessels in the retina, causing them to leak blood into the posterior of the eye.

Your eye doctor will use a special camera or other imaging device to photograph the retina and look for telltale signs of diabetes-related damage. In some cases, they may refer you to a retinal specialist for additional testing and possible treatment.

For a definitive diagnosis, you may need to undergo a test called a fluorescein angiography. In this test, a dye is injected into your arm intravenously and gradually appears in the blood vessels of the retina, where it is illuminated to detect diabetes-related blood vessel changes and blood leakage in the retina.

In later stages, leakage from blood vessels into the eye’s clear, jelly-like vitreous in the back of the eye can cause serious vision problems and eventually lead to blindness.

If you have CSME, you typically are advised to undergo laser photocoagulation treatment.

Non-proliferative diabetic retinopathy (NPDR): This early stage of DR — identified by deposits forming in the retina — can occur at any time after the onset of diabetes.

In Type 1 diabetes, these early symptoms are rarely present earlier than three to four years after diagnosis. In Type 2 diabetes, NPDR can be present even upon diagnosis.

The condition is characterized by these signs:

You should be monitored regularly, but you typically won’t require laser treatment for diabetic eye disease until the condition is advanced.

SEE RELATED: The link between diabetes and glaucoma

Beyond the presence of diabetes, how well your blood sugar is controlled is a major factor determining how likely you are to develop diabetic retinopathy with accompanying vision loss.

Of course, the longer you have diabetes, the more likely you are to experience vision loss.

The American Academy of Ophthalmology (AAO) notes that all diabetics who have the disease long enough eventually will develop at least some degree of diabetic retinopathy, though less advanced forms of the eye disease may not lead to vision loss.

Also, a study conducted at the University of Alabama at Birmingham and Wills Eye Hospital in Philadelphia found that African-Americans with diabetes are among those at highest risk for diabetic retinopathy and have one of the lowest rates of eye care access.

Hispanics with diabetes are also at higher-than-average risk of developing diabetic retinopathy and vision loss.

Results of the NEI-sponsored Los Angeles Latino Eye Study show that 42% of Hispanics who have had diabetes for more than 15 years will also develop diabetic retinopathy, compared with 15% for all individuals with diabetes of similar duration.

Native Americans are also at high risk of developing diabetes and related diabetic eye disease. Pima Indians, for example, have a 35% prevalence of diabetes compared with 9.4% among the general U.S. population.

When is diabetic retinopathy a disability?

You must make every effort through medical intervention and other remedies to address diabetes and diabetic retinopathy before you qualify for special considerations under the Americans with Disabilities Act (ADA).

A disability basically means that you are substantially limited in the way you function in daily activity. When you are disabled, you are entitled to certain reasonable accommodations at the workplace and at public places such as schools.

The ADA also requires that diabetics in particular have certain protections under the law, such as needed breaks at the workplace for insulin injections or lunches at set times to maintain blood sugar levels.

You cannot be fired from your job or denied employment strictly because you are diabetic, as long as you are able to handle the basics of your work tasks.

As an example, the American Diabetes Association says that a person with mild diabetic retinopathy might easily perform daytime tasks but could have difficulty with night vision. In this case, special accommodation such as appropriate lighting might be needed at the workplace.

If questions arise, you may need a letter from your physician that advises an employer regarding how well you will be able to perform certain work tasks. Any special accommodations you might need, such as extra lighting, could also be explained by your doctor(s).

State regulations governing disability differ, so you should also check guidelines established by the state in which you reside.

If you are visually impaired enough that you cannot work and expect the condition to last at least a year, you may be qualified for Social Security disability benefits.

To qualify, you must have been in the workforce previously for a length of time that depends on your age. You can contact your local Social Security representative for details or go online to view specific U.S. Social Security Administration guidelines at www.ssa.gov.

If you have diabetes (or are at risk for diabetes) and cannot afford an eye exam, there are programs available to help you obtain the eye care you need. Examples include:

EyeCare America. This public service program of the Foundation of the American Academy of Ophthalmology provides free eye exams for qualifying seniors. Eligible individuals receive a comprehensive medical eye exam and up to one year of care for any disease diagnosed during the initial exam at no out-of-pocket cost. To determine if you or a senior family member or friend qualify for this program, visit the EyeCare America website.

Lions Clubs International. This organization provides financial assistance to individuals for eye care through its local clubs. You can find a local Lions Club by using the “club locator” feature on the organization's website.

Diabetic retinopathy: An update on treatment. The American Journal of Medicine. March 2010.

Diabetic eye exam: What to expect